While the Medieval Warm Period did seem to present warmer temperatures, in truth, this period of time actually was one in which some areas of land were hotter, and some much cooler. This period was victim to environmental changes that increased the temperature at the time. For example, ocean current patterns were a cause of the abnormal spike in temperature, with ocean currents circulating warmer temperatures closer to the shore. When looking at these environmental effects, it goes to show that the period of warmth that occurred during the Medieval Warm Period does not have the same causes as the period of climate change that the Earth is experiencing now. Ocean temperatures have not been significantly impacting the overall warming of the Earth, and as such, cannot be counted as a large contributor to climate change. Since this period, temperatures across the globe have increased consistently, rather than only in some locations, which was the phenomenon seen during this time. The average warming of this period was on par with the changes seen in the early 1900's, but has since been surpassed with today's numbers, which encompass warming on a larger geographical area. Today's temperatures in the Northern Hemisphere are already hotter than the temperatures in the Northern Hemisphere during the Medieval Warm Period. Evidence of the natural mechanisms responsible for the Medieval Warming Period are not present today, so the same mechanisms cannot be blamed for today's rising temperatures. To conclude, the Medieval Warm Period was not warmer than what is occurring today, and today, environmental change is driven by humans. 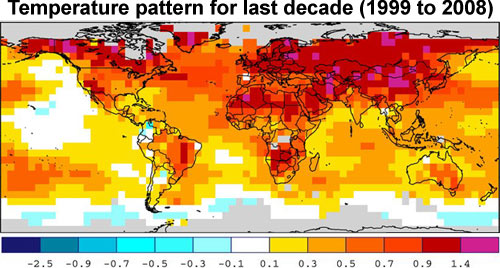