Last week we made considerable progress toward understanding Earth's global climate parameters, making it up to a comprehension of global convection cells and their climatic consequences like: The presence of these deserts really has nothing to do with the specific geography of North America, Africa, or Australia. Regions of dry air simply occur at those latitudes and we notice them when they coincide with a land mass.

In many ways, though, the geographic distribution of land and oceans shapes regional and global climate. That is the topic of today.

The global circulation model described above does not explain the distribution of all deserts. Some occur in places where they shouldn't be. We tend to think of the Pacific Northwest as being like Olympic National Park (right), but a short drive over the Cascades Mts. soon brings you to a broad arid region that is nowhere close to the 30 deg belt of global deserts. This is because of the rain shadow effect: When prevailing winds pass over high mountains, air is chilled and moisture precipitates out before reaching the lee side of the mountains. In effect, the mountains cast a "rain shadow" of aridity. Examples: Climate zones: As the map of world climate zones above shows, rain shadow deserts are only one of many impacts of Earth surface conditions on climate. Really to grasp this, we must consider the oceans

Oceans: Earth's primary reservoir of water, easily dissolved ions, and heat, holding roughly 1000 times as much heat as the atmosphere. At the ocean's surface, this heat is exchanged between air and water. Moreover, colder water is denser.

Composition: Salinity is measured in parts per thousand (per mil). Varies between 33 per mil and 37 per mil. Solutes are generally ions such as:

Note: All of these ions are heavier than a water molecule. Thus, when they are present, they increase the density of water. Thus, more saline water is denser. In this course we care greatly about the ocean's ability to transport these ions and gasses in solution (especially CO2) but that is a story for later. Ocean currents: Sea water doesn't just sit there. All global ocean circulation is ultimately driven by density contrasts between cold polar water and warmer waters of lower latitudes, but wind-powered surface currents act as catalysts. The interaction of surface currents driven by prevailing winds with the Coriolis effect generates currents that travel in great arcs along the western edges of oceans. Examples include: Upwelling: Something has to replace the water that is being moved by these currents. Typically, deep ocean waters well upward in regions where surface waters are being evacuated like the equatorial east Pacific. A significant source of nutrients for sea life. Indeed the comparison between the biologically productive waters near the Galápagos Islands (right) and the relatively sterile waters near Hawaii is striking. Of course any water upwelling from the deep oceans will be cold. Thermohaline Circulation: In both regions, surface waters are significantly chilled and, through the formation of sea ice, become more saline. Why not the north Pacific? Through quirks of global oceanic and atmospheric circulation, the North Atlantic is more saline than the Pacific to begin with, making it more dense, and experiences higher rates of evaporation, making it yet more saline. Thus, for Atlantic and Pacific surface waters of the same temperature, Atlantic waters are more dense.

As chilled saline waters sink, they form deep ocean currents that flow roughly opposite those of the surface and eventually reach zones of upwelling. The result is called the Global ocean conveyor system or thermohaline circulation.

Note for later: These polar sources of deep ocean water are essentially the only places where ions and dissolved gasses in the mixed layer can get into the deep layer, limiting the rate at which excess atmospheric CO2 can be taken up by the oceans.

Idiosyncracies of atmospheric interactions with oceans and continents: The Gulf Stream: Thermohaline circulation in the north Atlantic is dominated by the Gulf Stream, a surface current that brings warm waters of the Caribbean northeastward. Because of this and other attributes of Atlantic circulation, Western Europe is much warmer than other parts of the world at the same latitude. E.G. in London, it almost never snows, yet London is farther north than Halifax, Nova Scotia or Calgary, Alberta. (In fact, Washington DC is at roughly the same latitude as Lisbon, Portugal and Palermo, in Sicily.)

How would we know that such a process is starting? 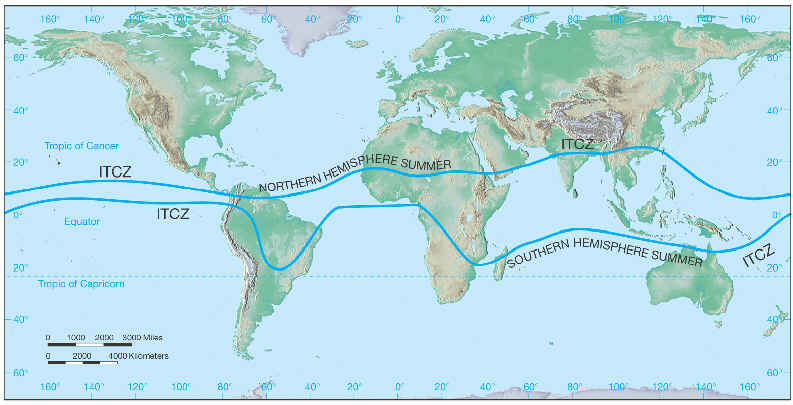 Monsoons: We said the intertropical convergence zone occurred at the equator where the influx of solar energy was greatest. On average, that is true, but during northern hemisphere summer, the greatest solar radiation is actually striking closer to the Tropic of Cancer; and in southern hemisphere summer, the Tropic of Capricorn. As a result, the ITCZ moves north and south with the seasons, moving slightly into the summer hemisphere. This has major effects when seasonal movement of the ITCZ causes it to move toward and away from major land masses like southern Eurasia, west Africa, the horn of Africa, and to lesser extents eastern South America and northern Australia. Thus: