This section links extensively to the USGS Geologic Provinces of the United States web site. You should visit this site and study it directly.

:
Image
During the Carboniferous, continental collisions resulted in the creation of Pangea. One major suture zone was marked by the Himalaya-sized TriassicTrans-Pangean Mountains. During the Jurassic Pangea rifted apart along the zone of weakness that these mountains represent. Their western foothills became the Appalachians. Their eastern foothills, the Atlas Mountains of northwestern Africa.

Starting in the Cambrian, the central craton of North America appears as the ancient continent of Laurentia. As we move forward in history, pay attention to two themes:

In the previous lecture, we introduced the topics of Rodinia and Pannotia, the supercontinents that preceded Pangea. We therefore take up the story after the breakup of Pannotia in the latest Proterozoic. (650 m.a.) 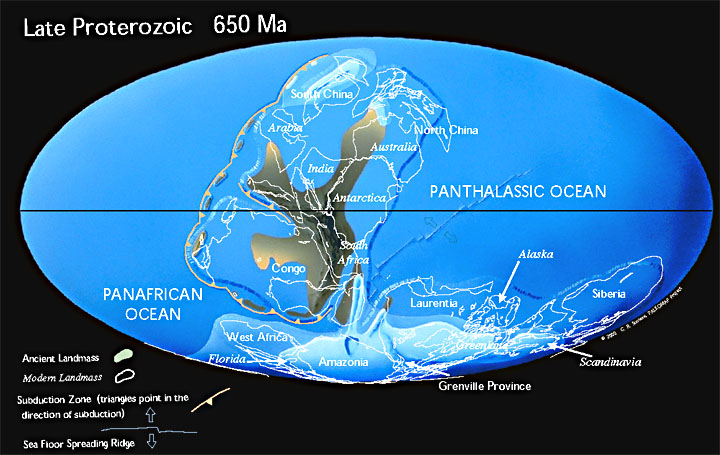 In the latest Proterozoic, the central craton of North America, called Laurentia, was fully assembled. At this point we don't call it "North America" because, strictly speaking, North American was formed by the rifting of Pangea, which occurred later. The rocks of Laurentia, however, were destined eventually to become part of North America. 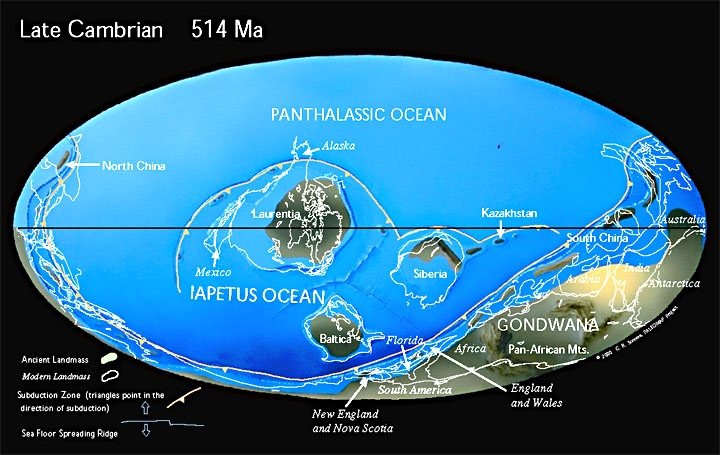 As Laurentia rifted away from Pannotia it assumed a positon near the equator. By the Cambrian Period, it was surrounded on all sides by passive margins - continental margins that are far from any plate boundary. Additionally, sea levels were historically high, so much of the continent was submerged as shallow sea. 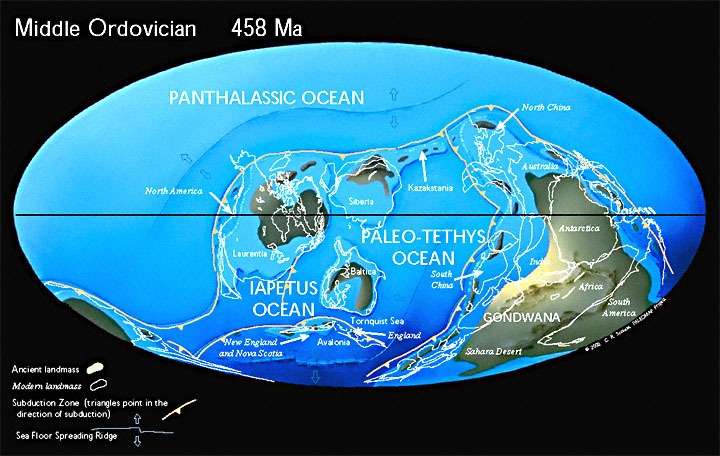 During the Middle Ordovician , however, Laurentia was passively carried toward an oceanic-oceanic convergent boundary. Being a large continent, it couldn't be subducted. Instead, the subduction zone was shut down and its associated volcanic arc was welded onto Laurentia's (modern) east coast in the Taconic Orogeny, the first of three collisions that would create the Appalachians. For the next 250 million years, what's now the east coast would be an active margins. 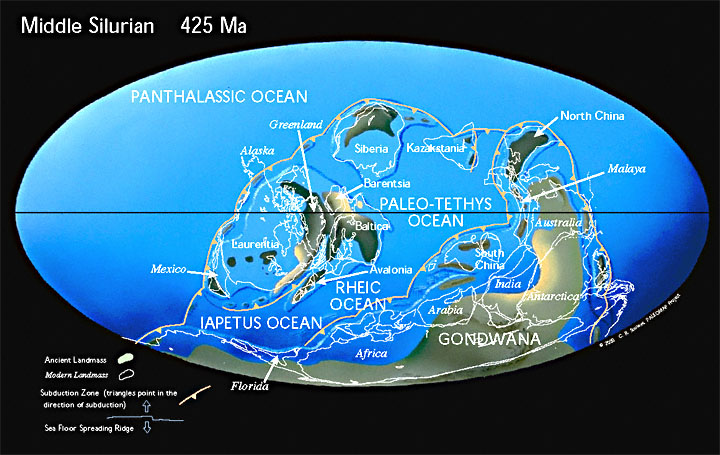 By the middle Paleozoic, the east coast was an active margin, fringed by a new active subduction zone. During the Silurian , a small continent called Avalonia rode the oceanic lithosphere into this subduction zone and in the early Devonian , was welded to Laurentia as a microplate terrain. Farther north, the craton of Europe, called Baltica, collided with Greenland (which was part of Laurentia.) Collectively, this constitutes the Acadian Orogeny, the second in the Appalachian-building series. Thick deposits of sediment eroded from these mountains were deposited to the west, in in low-lying flood plains and shallow seas where the Appalachians now stand.

Slightly later, in the Late Devonian, Laurentia-Baltica was carried into a subduction zone along its modern western border and collided with the associated volcanic arc. Now the west coast was also an active margin. This event, the Antler Orogeny, was like a western version of the Taconic Orogeny, and signaled the beginning of the slow accretions of many microplate terraines to Laurentia's western margin. 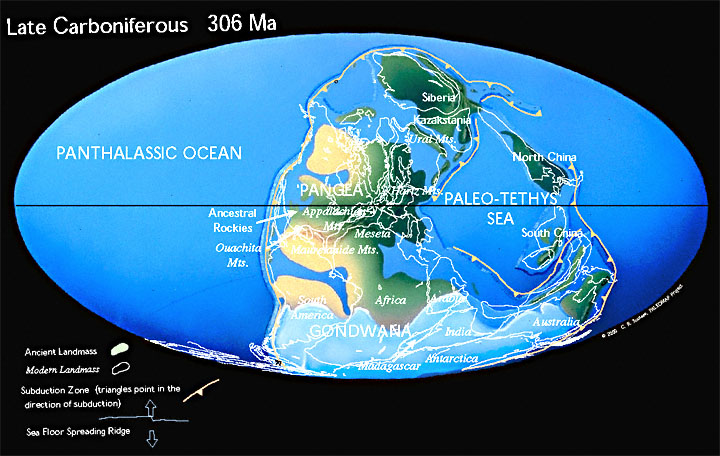 During the Carboniferous, Laurentia-Baltica collided with Gondwana (a giant continent containing the makings of Africa, South America, Antarctica, India, Australia, and New Zealand.) The portion of Gondwana destined to become Africa struck Laurentia's eastern margin, while the portion destined to become South America struck the southeast margin. Collectively, this is called the Alleghenian Orogeny. The huge mountain range created is called the Trans-Pangean Mountains. The sediments that had eroded from Taconic and Acadian mountains and deposited to the west were caught up in this new orogeny and extensively folded.

While this was happening, other continents, including Kazakhstan and Siberia, were colliding with Baltica and with one another. The result was Pangea - the last supercontinent, which contained every major landmass except the two continents destined to become North and South China. Pangea was hour-glass shaped with two major regions: 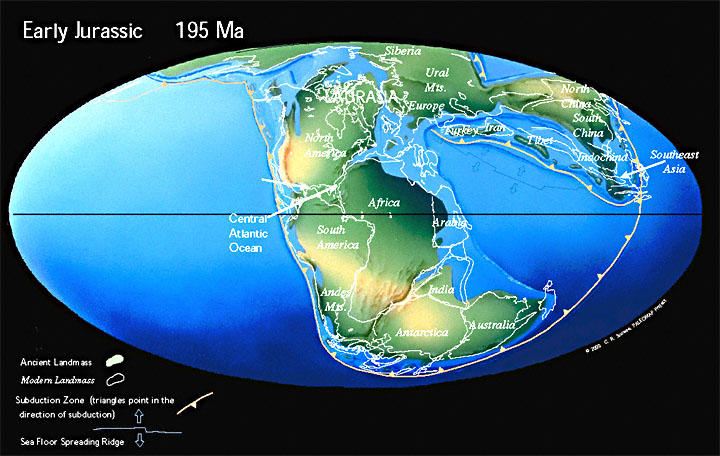 By the Late Triassic, Pangea was beginning to rift apart along the suture of the Trans-Pangean Mountains. Remains of rift valley lakes are preserved in the sandstones of the Newark Supergroup. By the Early Jurassic (right), actual sea-floor crust was forming between Laurasia and Gondwana. This rifting marks the birth of North America, containing the former Laurentia at its center; and of the Atlantic Ocean. Ironically, the high mountains of the central Trans-Pangean Mountains (the region closest to the new ocean basin) now eroded away, leaving the former foothills as sad remnants. These are the Appalachians, the Ouachitas of Oklahoma and Arkansas, and the Atlas of Morocco and Mauretania. Florida, formerly a chunk of Gondwana, remained stuck to eastern North America. From this time onward, eastern North America has been a passive margin.

In the west, an active margin was present, and Laurentia experienced a series of collisions with volcanic arcs and small continents, as microplate terrains continued to accrete.

Plate tectonic processes were running at full speed as the Atlantic continued to lengthen and widen. During periods of vigorous plate tectonic activity, the ocean floors, being warmer than usual, actually stand up somewhat higher topographically. This, in turn, pushes sea water onto the continents. The Cretaceous was such a time. In addition, superplumes, unusually large and abundant mantle plumes, caused widespread volcanic eruptions in the West Pacific. Finally, the Cretaceous was an ice free world. The net effect was that sea level stood at its highest since the early Paleozoic. At this time, North America was bisected by a shallow Central Cretaceous Seaway. The Proterozoic bedrocks of much of the continent today are hidden by thick limestones accumulated during this interval.

Elsewhere in the world, Africa and India rifted away from Gondwana. Still, North America remained firmly attached to Laurasia in the east and west.

Laramide Orogeny: In the west, two interesting processes were occurring: 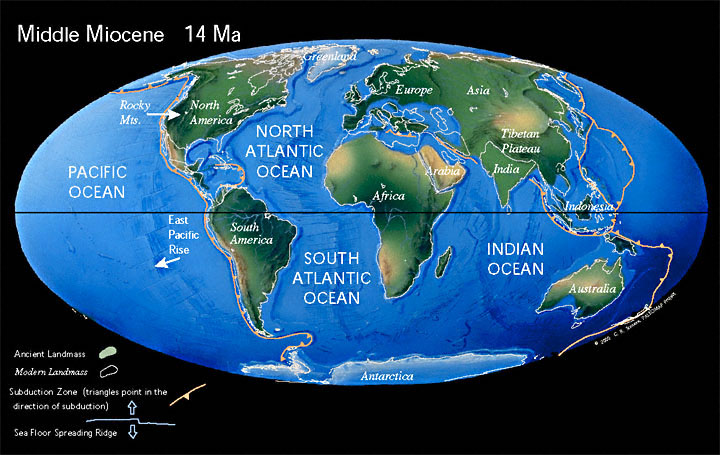 Finally, during the early Cenozoic, eastern North America rifted from what we now call Eurasia, opening the gateway between the Altantic and Arctic oceans. In the west, the two continents remain connected.

Starting around 40 million years ago, the western edge of North America gradually encountered and overrode the divergent boundary separating the Pacific Plate from the Farallon Plate. As this happened, its western margin changed from a convergent to a transform boundary. Today's Juan de Fuca and Cocos Plates are last sad remnants of the Farallon Plate. As a result of this transformation, large regions of western North America, which had been compressed for over 100 m.y. by the shallowly subducting Farallon slab were suddenly released from compression and "relaxed," widening to nearly twice their original width. This region is called the Basin and Range and the widening event is the "Basin and Range extension." Its widening is marked by numerous parallel normal faults, forming a series of parallel mountain ranges and valleys.

Note: The normal fault-bound blocks created in this way are known as:

In map view, the Basin and Range looks like a caterpillar drill team, with numerous parallel ranges oriented toward the north northeast. 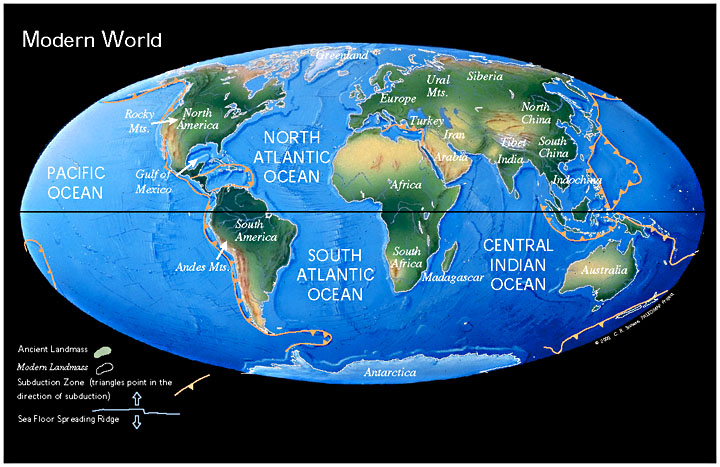 A final finishing touch during the late Neogene was the evolution of the Isthmus of Panama, an island arc coalescing to connect North and South America within the last five million years. This even had momentous implications: