Climate change as a reality of nature: By the 18th century, literate people recognized that climate conditions described by Classical and Medieval authors were often different from those that they witnessed. Today we note that the canals of the low countries are no longer the reliable winter highways for skaters depicted by Peter Brueghel or described in Hans Brinker, or the Silver Skates. It is apparent that climate changes over time. As the science of geology arose, the attention of geologists was drawn to ancient climates for which no eye-witness accounts existed. 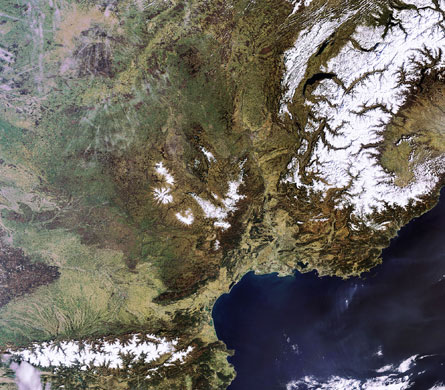 Louis Agassiz: (1807 - 1873) Swiss geologist, paleontologist, paleoclimatologist. Investigated reports of glacial erratics (glacier-transported boulders) in places where contemporary glaciers couldn't possibly transport them, such as the Jura Mts. of France and Switzerland. In 1840, published Etudes sur les glaciers (Study of Glaciers), proposing that the prehistoric Earth had experienced an ice age in which a continental glacier similar to that of Greenland had covered the Alps and had lapped against the Juras. As more information rolled in, it became clear that the the ice age glaciations had occurred at high elevations throughout the world and throughout high latitudes.

To know what kind of landforms led to this conclusion, one needs to understand the deposition of continental glaciers today: Land forms resulting from continental glaciers: Continental scale glaciation creates interesting opportunities for ice to interact with large volumes of sediment. Results include: Periglacial features: Beyond features created by glacial ice, itself, the regions adjacent to continental glaciers display characteristic features owing to: