Welcome to GEOL212 - Planetary Geology. Be excited. The study of the planets embodies more than just the excitement of a positive and progressive future for humanity. It manifests the passage of the study of the solid bodies of the Solar System into the realm of Geology with the proliferation of robot planetary probes. 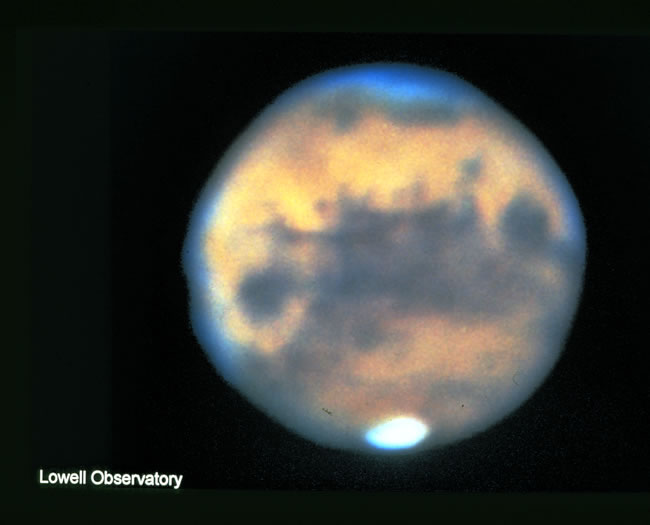 Mars viewed by Lowell Observatory from Lunar and Planetary Institute
When I was a kid, you had to study Mars with a telescope. Today, we have rovers crawling over it, returning the kind of data that only geologists know what to do with. That might sound dated to you, but the process of discovery is ongoing. This is definitely a geology course addressing:

Mercury (left) is a planet. Ganymede (right) is not.

But this is insufficient, because in the last four decades, as human and robot exploration of the Solar System has returned increasing data (including actual samples) of the type that geologists are used to analyzing, the study of the solid worlds of the Solar System has slipped from the realm of astronomy to that of geology. Thus, a better contemporary definition might be:

The study of the planetary bodies, their history, and the physical and chemical processes that have shaped them.

This revised definition, of course, encompasses the traditional one.

Saturn's moons Hyperion (left) and Mimas (right) to scale.
Note: planetary bodies include proper planets, dwarf planets, and minor bodies - essentially all objects in the Solar System except for the sun. Informally, Merck distinguishes between:


Planetary Geology is the branch of geology specifically devoted to the study of objects other than Earth. In it we bring to bear many of the major geologic disciplines used to study Earth, including:

The Moon (left) and Triton (right) to scale.

What do we actually care about in this course? Consider the two worlds at right: Earth's moon and Triton. They are about the same size, yet they are different. What are the differences and why are they there? Comparison of the Solar System with the Kepler-186 system from NASA
This example is a microcosm of the truly great questions of planetary geology:

These question will form the central focus of the semester. In addressing them, we will inevitably be led to the biggest question:

Why do the worlds of this or any Solar System exist at all?

To address these, we will need to take on a short list of other important questions including:

In pursuit of these answers, we will encounter more interesting questions than can possibly be encompassed in a single world. For example:

Io from Wikipedia
Why are some worlds geologically boring places where not much has happened in the last 3.8 gy (billion years), while others like Io (right) are in a constant state of geologic change? More

Venus as seen by Venera 9 from Project Avalon.

Why do physically similar worlds like Earth and Venus, have such different surface environments?

Mercury and Ganymede to scale.

Why are some worlds made mostly of rock and metal (Mercury - left at 0.055 Earth masses), and others mostly of ice (Ganymede - right at 0.025 Earth masses) even though they are nearly the same size?

Indeed, why do even the rocky worlds differ so much in their internal structure?

The Solar System from Wikipedia.

Why do the worlds of the Solar System occur in so many different sizes?

What actually goes on inside the planets?

Is there any practical reason to care about our Solar System neighbors?

Key concepts and vocabulary. Understand these or you're toast: