Sources and movement of heat within planets

The general term for the heat imparted to a planetary body by the processes of its formation and differentiation. It has two major components:

where G is the gravitational constant, M and m are mass, and r is distance from the center.

Thus, once the heat of accretion gets differentiation going, it causes a positive feedback with the heat of gravitational release, releasing more heat. Both sources of heat were significant early in the history of the Solar System and continue at lower rates today.

Thermodynamics: Sir William Thomson, Lord Kelvin, during the late 19th century, assumed that the Earth had originally been molten then, using average melting point of rocks and the laws of thermodynamics, determined that the Earth would completely solidify within 20 million years. Both uniformitarians and evolutionists were uncomfortable, since their notions required a much older Earth, but the quantitative rigor of Thomson's approach made his the most prestigious estimate of his day.

Lord Kelvin could not have known that new heat is generated inside the Earth by radioactive decay (nuclear fission), because the process had not been discovered.

The discovery of radioactivity: Ironically, radioactive decay, which frustrated Kelvin's purpose, ended up providing the true key to the absolute dating of rocks.

An ongoing source of heat is the decay of the nuclei of radioactive isotopes. First, definitions:

Note: To denote isotopes, we write the atomic mass in superscript above and before the chemical element symbol. Thus, 12C, 13C, and 14C are isotopes of carbon. (Only 14C is radioactive.)

The key point is that radioactive decay is a continuing source of new heat: For example, 26Al -> 26Mg + γ. In this case energy is emitted as high-energy gamma radiation.

Half-lives: To answer the first question above, we need to look at the time factor of radioactive decay. The fact that a given radioactive substance's nuclei have the same stochastic chance of decaying in a given interval means that when we observe huge numbers of nuclei in a sample, we find that half of them will decay in a specific time period - the half-life. Thus, we can use the methods of radiometric dating to determine the age of a sample where we can determine the relative quantity of a radioactive substance and its daughter product. This requires a closed system - i.e. that materials have not percolated into or leaked out of the sample after it formed.

Answer: It took a generation for the wrinkles to be ironed out of the techniques for radiometric dating, but that answer is that the Solar System and its planetary bodies seem to have formed ~ 4.571 ga.

We care because the many radioactive isotopes present at the beginning of the Solar System will have decayed at different rates. It is convenient to think of these as:

Some short-lived radioisotopes thought to have been common in the early Solar System and their half-lives:

Some long-lived radioisotopes and their half-lives:

Where is radiogenic heat concentrated? Most long-lived radioisotopes are lithophiles. As a result, radiogenic heat arises in the mantle and crust. In fact, heavy atoms like those of thorium or uranium are incompatible that is, their large size inhibits their ability to assume a close packing in high-pressure crystals, so they tend to be concentrated in the crust. We can expect more radiogenic heat to have been produced in a planet with a relatively thick mantle and crust, like Mars, than in one with very thin ones, like Mercury.

One last ongoing source of planetary heat comes from tidal forces. We have discussed the nature of tides already, but not their effect on objects that experience them. In a nutshell:

Orbital resonance of Galilean moons from Wikipedia
Orbital resonances: Left alone, eccentric orbits tend slowly to evolve into more nearly circular ones over time. In some cases, orbital resonances - regular interactions between orbiting objects develop. This typically happens when the ratios of two object's orbital periods makes a simple fraction. One effect of such resonances is to maintain the eccentricities of the participating bodies' orbits. The orbits of Ganymede, Europa, and Io form a 1:2:4 resonance with the result that the eccentricities of Io's and Europa's orbits are maintained.

Io Wikipedia
Because it: Io experiences the most extreme tidal heating.

Io is the Solar System champ for tidal heating, but it can have significant effects elsewhere. All moons on this list show signs of significant geologic activity. Sun on ISS panel from Astronet

One heat source we haven't considered is the sun. Solar radiation is a significant contributor of heat to the planets' surfaces and atmosphere, but not to their interiors. When we think of a planet's intrinsic internal heat, we can ignore the sun.

What happens to the heat?

Black body spectrum from Wikipedia
Black body radiation: Remember our hypothetical non-reflective body that radiated electromagnetic energy at different wavelengths depending on its temperature? All objects with any thermal energy radiate in this way. For something as hot as the sun, the majority is in visible wavelengths. Planets radiate in the lower-energy realm of the infrared. Thus, orbiting infrared observatories are powerful tool in the search for exoplanets. That's all tame compared to the accretion disk of a black hole that may blaze away in X-rays (we won't even consider gamma-ray bursts). Nevertheless, all bodies radiate away heat and cool down over time. For planets, the rate at which this happens depends on: Surface to volume ratio: Size matters because surface area and volume scale up at different rates. If we scale an object like a sphere up proportionally, its surface area scales to the 2/3 power of its volume. Thus: Assuming that heat is distributed uniformly inside the volume, then the larger sphere should take twice as long to cool as the first. The moon's A/V ratio is 3.55 times that of Earth. No surprise, then that the moon is colder internally than Earth. Indeed:

Many other factors are involved, however. How is heat conveyed to the surface? There are three basic mechanisms:

Conduction: Here, heat is transferred by the transmission of vibrational (thermal) energy from one atom to the next. Warm atoms vibrate more quickly than adjacent cold ones, but by jostling them, them impart vibrational energy. Eventually, energy is spread evenly and all atoms vibrate at the same rate. Conduction enables heat to be spread from the bottom of a skillet to the handle.

Convection: This is the process by which material circulates through a region that is unevenly heated. In a tea kettle, for instance: Convection cells in coffee
The tops of convection cells (units of convective circulation) can often be seen in cups of tea or black coffee. Condensing water vapor marks to top of rising columns of warm water. Dark lines separating them marks the location os sinking cooler water.) That we see similar features in the nitrogen ice cap of Pluto's Sputnik Planum demonstrates that it is temperature contrast, not absolute temperature, that drives this process.


Thermodynamics tell us that convection definitely occurs inside Earth's mantle. Suppose the Earth had cooled from conduction only. Thermodynamic calculations show that a given parcel of heat could have moved only 400 km in 5 Ga by conduction alone. That would mean that below 400 km, everything must be molten. The ability of S waves to propagate at much greater depths shows us that this is not true. Convection must be at work, also. In fact, plots of changes of temperature with depth in Earth show sudden discontinuities in temperature at the Moho and the CMB. Arguably this is because at those boundaries, conduction is the only means of moving heat.

Modelled convection in Earth's mantle from University of Hawaii Astronomy 110
The notion of convection in the solid mantle seems counterintuitive, but it is real. (See simulation and seismic data above). Remember ductile deformation? Many solids deform ductilely (modest example). At the temperatures and pressures of most of the mantle, silicates deform ductilely as well just more slowly. 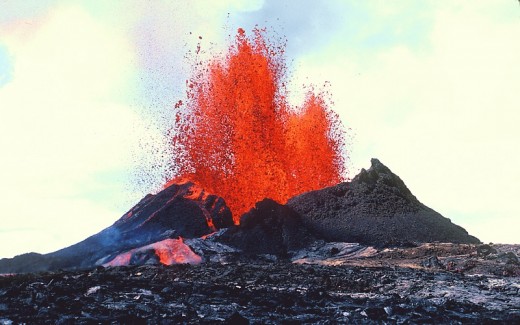 Puu O'o HI erupts from Hubpages
Advection: The transport of heat by the simple upward movement of hot material passing from a solid to a liquid state. Key concepts and vocabulary: