Volcanism on other worlds

Alternate Earths: So far we have considered the effects of variation in magma composition, temperature, and volatile gas content (i.e. "wetness") on the diversity of volcanic eruptions, but not of globally invariable factors like:

To consider volcanism on other worlds, we must consider these.

To start, consider these parameters one at a time in a series of "alternate Earths" that are like the real one except for the parameter under consideration.

On a planet identical to Earth except for having lower gravity, volcanic activity may be:

A higher-gravity Earth would show the opposite trends.

On a planet identical to Earth except for having a thinner atmosphere, volcanic activity would be:

A colder Earth, therefore would experience:

On a warmer Earth: Enceladus geysers from Astro Info
Cryovolcanism: All of the parameters we have considered apply to any material that might melt near a planet's surface regardless of composition. In the outer solar system, this could easily take the form of cryovolcanism - volcanic activity involving low-temperature "magmas" of liquid ices including water and ammonia. Indeed, we see many features that seem to result form the eruption of slurries of water, ammonia, and other substances. Active cryovolcanism has been seen on Enceladus (right) and Triton, and probable cryovolcanic structures are observed on Cryovolcanoes are subject to same physical constraints as the hotter varieties.

Comparative volcanism - What's out there? There are no alternate Earths. In the rough and tumble of the actual Solar System, the effects of.....

....interact in complex ways. Can we make sense of what we see in the terms that we have presented?

Generally, we can based on our expectations from our "alternate Earth" scenarios, but when a planetary body frustrates our expectations, it generally points to some fundamental difference between that body and Earth. 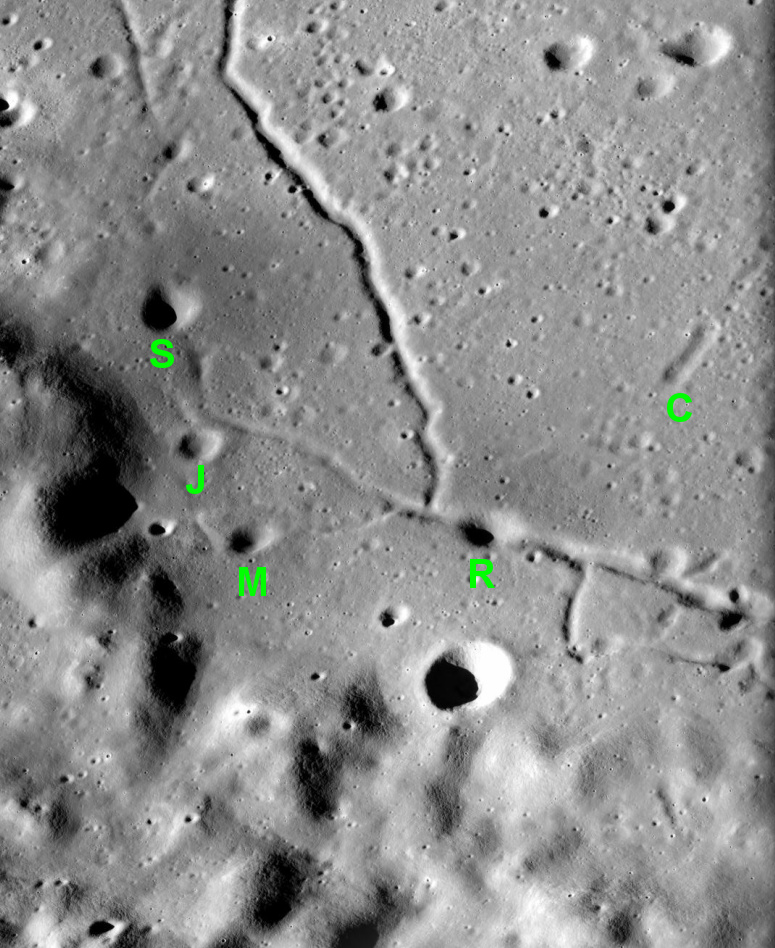 Starting simple, the moon is:

However according to Braden et al., 2014 there are volcanic irregular mare patches such as the Ina structure, that may be as young as 100 Ma. According to impact geochronology,

Mars' identifiable volcanoes are limited to three regions. The first two have been recognized for decades:

Both are known for giant shield volcanoes like Arisa Mons.

Eden Patera in Arabia Terra Sci-News.com
Martian supervolcanoes: We have discussed the tectonic significance of Mars' giant Hawaii-style shield volcanoes (no lateral plate motion). They seem mostly to represent effusive eruptions of mafic magma. Odd. Maybe Mars' air was thicker when they were going off, but that much thicker?. There ought to be signs of explosive eruptions if Mars is like an alternate Earth with thin air and lower gravity.


Until 2013, few sites on Mars have been interpreted as the result of explosive eruptions. Recently, Michalski and Bleacher, 2013 identified a third region, Arabia Terra, as the site of older and fundamentally different volcanoes that:

So far, their exact ages and periods of activity are a mystery. Why are they different from the volcanoes of Tharsis and Elysium? Some possibilities:

Remember, however, that basalt and its derivatives are ubiquitous on Mars, so its entire surface may represent volcanic activity, however ancient. Martian rootless cones Space flight now
Rootless cones: Mars is unusual in having many "rootless cones" - volcanic cones that are not sources of lava. These are probably like spatter cones on Earth. (See the Lake Myvatn region of Iceland, for a terrestrial analog.) What does this suggest about the content of the ground over which the lava flowed? 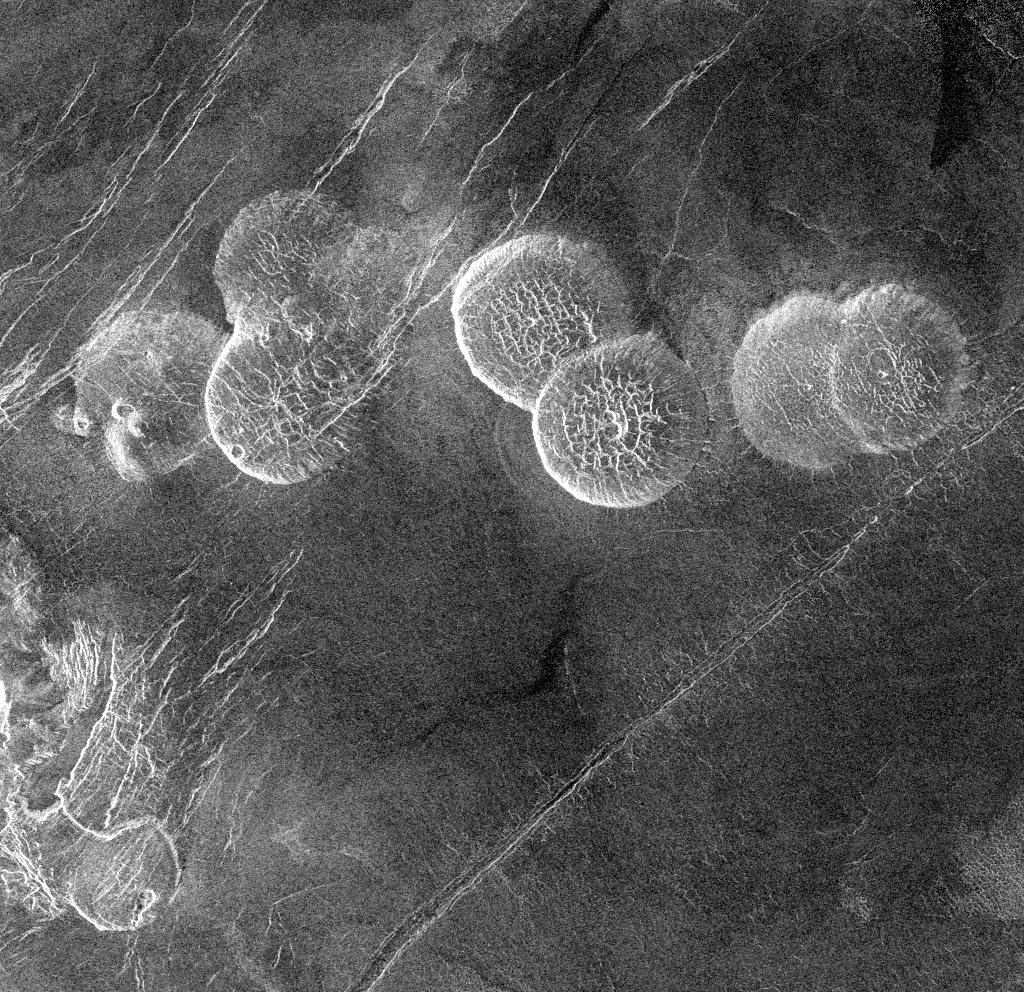 The closest thing to an alternate Earth, has similar gravity and composition, but is very hot (733 K - 460 deg C) and has a massive atmosphere (92.1 bars). This leads us to predict: Without catching Venus in the act, we won't know about plinian convection, but surface features seem to vindicate our predictions:

Elongate lava flow on Venus from NASA
We also predict that low temperature lavas will flow long distances before solidifying. On Venus we see channels like those of rivers only without tributaries that can flow hundreds to thousands of km. These can only have been made by fluid lavas with melting points so low that they were not significantly warmer than the surface. On Earth, most low temperature magmas are viscous, but there is an exception: Carbonatite, which contains significant amounts of calcium carbonate (CaCO3) and erupts at roughly 773 K. That's only 40 K hotter than Venus' ambient surface temperature. Kargel et al., 1994 suggest that carbonate eruptions could be responsible for Venusian channels. (Although there have been several carbonatite volcanoes in Earth history, currently only Ol Doinyo Lengai in Tanzania erupts this material.)

We have already discussed the source of Io's intense volcanic activity - tidal heating. Now the volcanoes, themselves. Ionian volcanoes are generally: These volcanoes seem to erupt two distinct types of material:

Eruption of Tvashtar Catena from Wikipedia


Io's mantle and crust are probably highly differentiated, with additional differentiation of the silicate and sulfur-compound portions of the crust. The upper mantle experience extensive melting that yields ultramafic "komatiitic" magma. As this magma rises, it in turn, melts sulfur compounds of the upper crust. Perhaps it makes better sense to refer to ultramafic eruptions as "volcanoes" and sulfur eruptions as "geysers."

Just to make this more colorful, Io underwent a paroxysm of volcanic activity in the summer of 2013 that was especially impressive and has left researchers (including deKleer et al., 2014) wondering if they hadn't previously underestimated its volcanic energy. 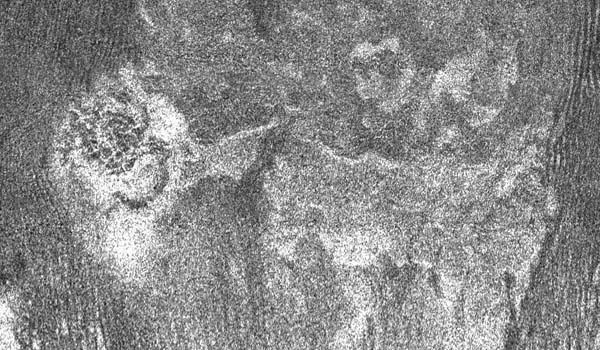 As with several other icy worlds, there is evidence for a sub-surface layer of icy liquid water (probably mixed with more exotic substances like ammonia or methane) on Titan and controversial evidence of cryovolcanoes resulting from the eruption of cryomagma derived from this deep ocean. To date the most solid candidate:

Because Titan's icy lithosphere is lighter than liquid water, why would that more dense water have have gotten to the surface at all. Possible mechanisms include:

The presence of cryovolcanoes potentially solves one problem: How does the supply of methane in Titan's atmosphere get replenished?

A less athletic analogue to Io, but much colder and, therefore, stranger. Triton's average temperature is 38 K, at which nitrogen (a gas on warmer places like Io and Titan) freezes as a solid. Triton's surface is freshly remodeled and has few impact craters. Today, Triton's retrograde orbit is nearly circular, but earlier in its history (after its capture by Neptune) it experienced extensive tidal heating. Today it appears to have a residual deep ocean, like many other icy worlds. Like Io, two forms of volcanism seem to be active: 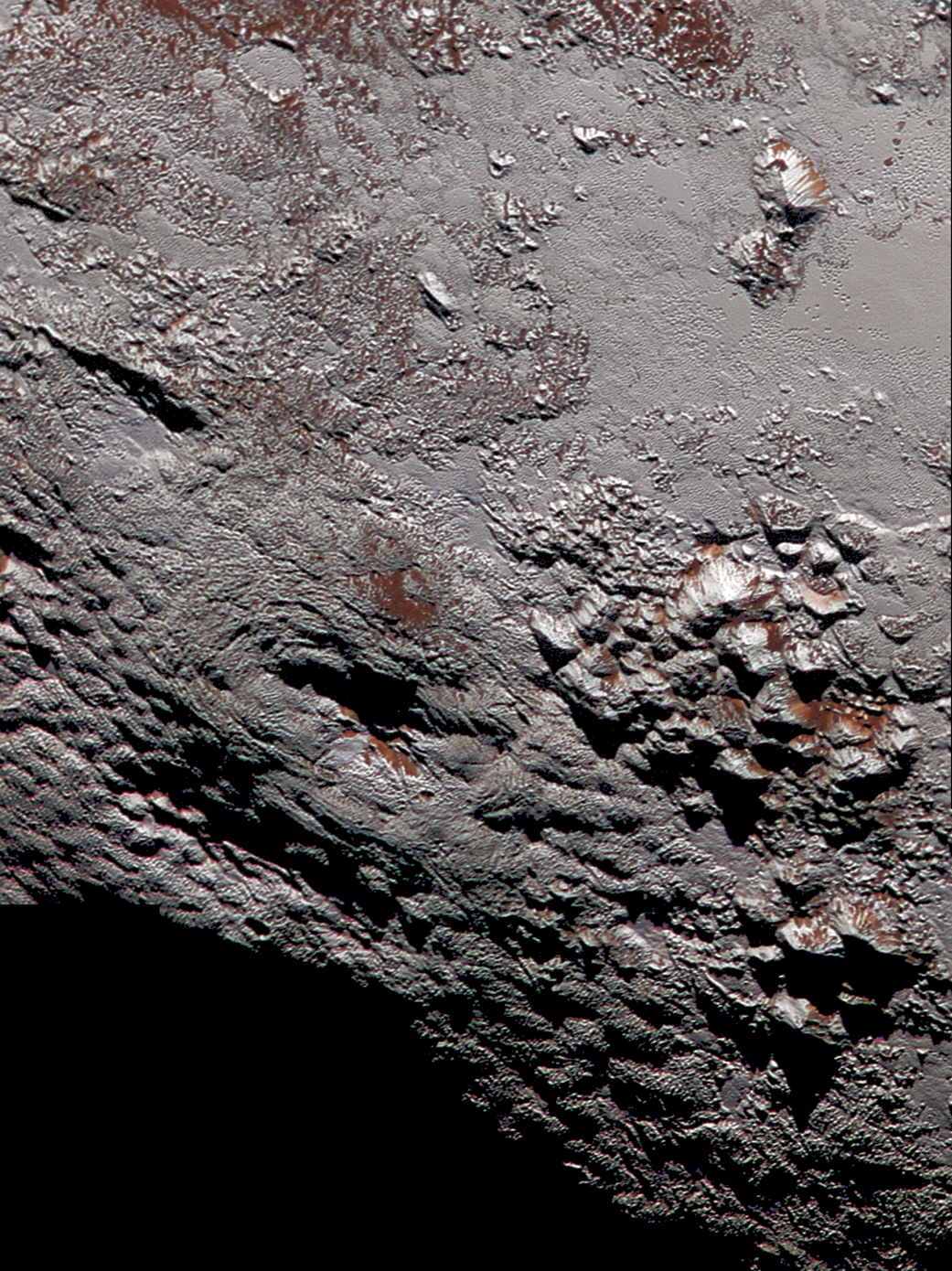 And this just in: At least two large potential cryovolcanoes have been spotted on Pluto. The slopes of Wright Mons, (right) have only one impact crater, suggesting that it has been active relatively recently.
Key concepts and vocabulary: Additional reading: