Atmospheres of the solid worlds II: Structure and heat transport

Speculation on the surface of Venus
We continue our consideration of the atmospheres of:

Effective temperature: The ideal temperature at which a planet precisely re-radiates all of the energy it receives from the sun. For an idealized black-body, it is:

Thus, in our solar System, the only real variable in computing effective temperature is distance from the Sun.

If we treated real planets like idealized black-bodies, we get these effective temperature:

Not crazy sounding except when you consider that in reality, these planets don't absorb all of the solar radiation that hits them

Iapetus: High and low albedo on a single world
Albedo: However, to know incoming solar radiation, we must also consider Albedo, the amount of radiation reflected back into space. Clouds and surface features like ice caps have high albedo. Likewise:

Albedo is measured on a scale from 0.0 (no reflectivity - a physicist's ideal "black body") to 1.0 (all light reflected). Modest examples:

To factor is into effective temperature, we calculate

Incorporating albedo we get the following estimates of effective temperature:

Again, makes sense. Mars is farther from the sun than Earth, and Venus has much greater albedo. For Mars, it also approximates mean surface temperature well.

From The Koshland Science Museum
The Greenhouse Effect:

But for Venus and Earth, true mean surface temperature is:

Yikes. Earth is 33 K warmer than expected. Venus is 500 K warmer. This difference is because of the greenhouse effect - the ability of planetary atmospheres to trap heat. Solar energy usually reaches planet's surface in the form of visible light. Whatever fraction is not reflected by albedo heats whatever opaque surface absorbs it.

Hot objects reradiate energy as infrared radiation, however many atmospheric gasses that are transparent to visible light (allowing the energy in) are opaque to infrared, preventing this energy from radiating back into space. The result is that the atmospheric gasses opaque to infrared are warmed up. These are greenhouse gasses. Foremost among them:

Although most sunlight hitting Venus is reflected into space, much of that which penetrates is trapped by its massive CO2 atmosphere. On Earth, even trace amounts of CO2 and water increase temperature significantly. Note: Without this, mean Earth temperature would be below freezing.

So, how is this heat distributed vertically in the atmosphere?

On any planet, atmospheric pressure (density) decreases smoothly with increasing elevation. Temperature is more complex, and allows us to define distinct atmospheric layers:

The troposphere is warmed by infrared radiation from the planet's surface (which has been directly illuminated by visible sunlight) With increasing elevation, heat from this source diminishes rapidly, causing rapid cooling.

Remember that visible light images of Titan show a featureless orange smog atmosphere. McKay et al., 1991 indicated the reason: Titan's greenhouse effect was being partially cancelled out by an antigreenhouse effect. Recall, images showing surface features are in infrared. Thus, infrared wavelengths definitely penetrate Titan's atmosphere and visible ones don't. The opposite of the greenhouse effect here. Infrared can carry heat away from Titan's surface, but visible light is, largely, blocked from bringing it in.

Atmospheric retention the distribution of atmospheres in the Solar System can still be puzzling:

A planet's ability to retain its atmosphere is a function of two variables:

Notice that the escape velocity depends only on the ratio M/R of the planet. It has nothing to do with characteristics of the object that may escape. The escape velocity is the same for a rocket and for a gas molecule.

These are the speeds that a gas molecule must attain to escape from a planet's atmosphere. How do they attain those speeds?

Thermal energy: So, what is the velocity of a gas molecule? It depends on the temperature and the molecular mass of the gas. Hot gas molecules move at higher velocities than cold gases, and heavy molecules move more slowly than light ones. Note that this is an average velocity. Gas molecules do not all move at one speed; there is a wide distribution of speeds at any temperature.

With this in mind, we can see by pairwise comparison that: 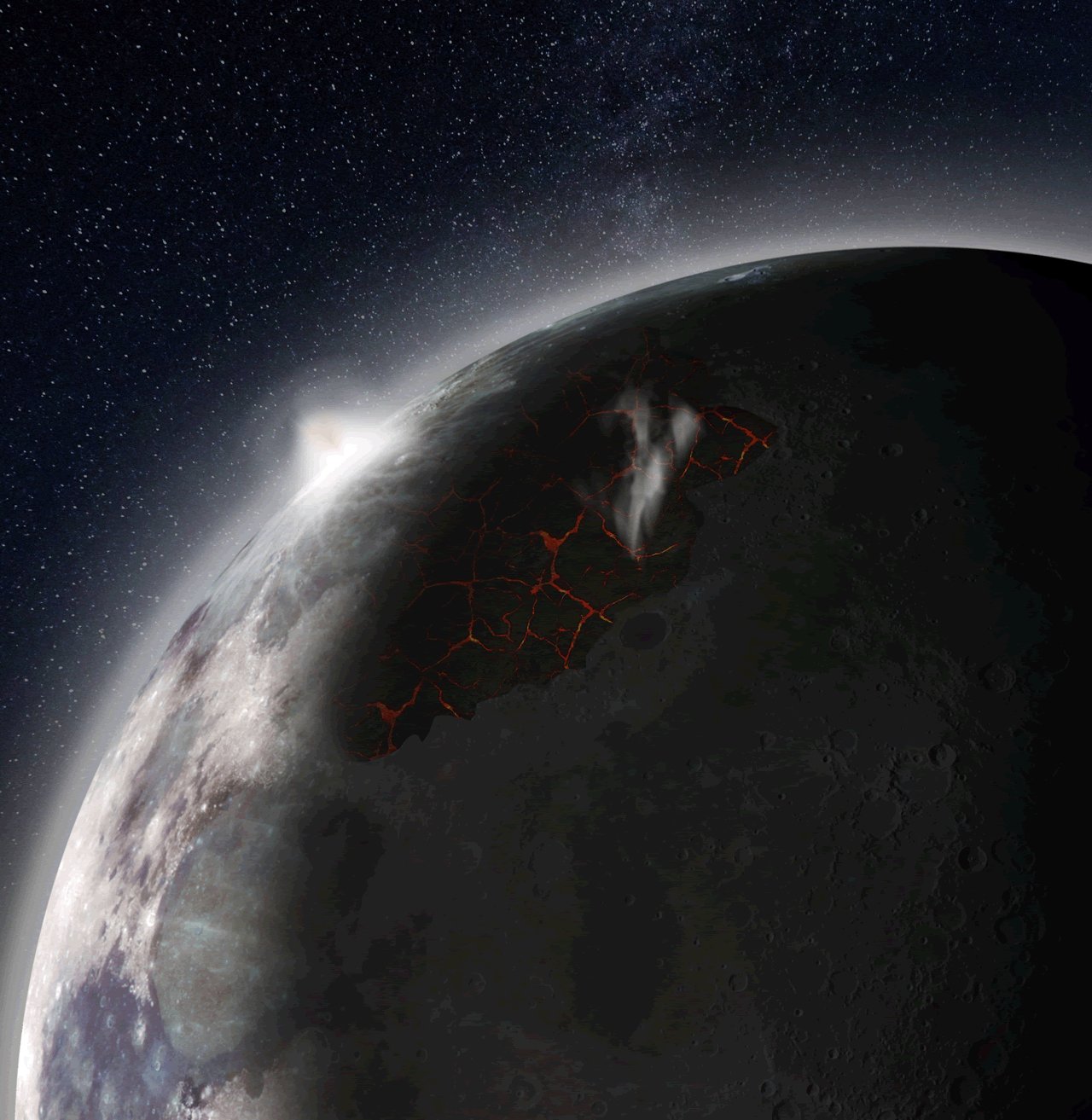 Artist's impression of the Moon, 3.5 Ga. From Phys.org
Caveat: But note that a planetary body may acquire an atmosphere only to lose it. Needham and Kring, 2017, calculated the amount of gas released on Earth's Moon during its period of giant volcanic eruptions around 3.5 Ga and determine that these could have formed an atmosphere denser than Mars' that could have lasted for 70 my.

For an atmosphere to remain bound to its planet over the age of the solar system (4.56 Ga), the average speed of gas molecules should be less than 1/6 of the escape velocity.

Note: The temperatures we use here are temperatures of the upper atmosphere - the region from which gas molecules actually have a clear shot at escaping. Nevertheless a glance at the x-axis figures of this graph from your text shows that something is horribly wrong.

Here is a correct version. To learn more, play with the applet from the University of Nebraka Lincoln