The Giant Planets I: Jupiter and Saturn

The planets to scale from The RASC Calgary Centre
The major distinction of the giant planets is their size. Duh. That sounds trivial but actually it isn't. Being as massive as they are, Jupiter, Saturn, Uranus, and Neptune are qualitatively different from the solid worlds. Consider: Mercury + Venus + Earth + Moon + Mars = slightly less than two Earth masses. The four giant planets together comprise approximately 445 Earth masses: This fact cascades into many consequences: 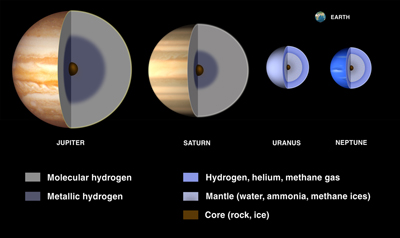 The planets to scale from Astronomy on line.org

Jovian planets have no surfaces

The graph at right is a phase diagram that shows, for different combinations of temperature and pressure, whether a given substance exists as a solid, liquid, or gas. At high temperature and pressure, we see a critical point. This is the state of temperature and pressure beyond which the distinction between liquid and gas becomes meaningless, and one can only refer to materials as fluids. In all but the upper layers of the jovian planets, their major components are beyond this critical point. Thus, these worlds lack proper surfaces, regardless of how much this strains our imaginations. (The schematic at right could apply to any major chemical constituent.)

Note: By arbitrary convention, the level at which atmospheric pressure is 1 bar is treated as the "surface." This roughly corresponds to the cloud tops.

Consider the fate of the atmospheric probe conveyed to Jupiter by the Galileo spacecraft. It entered the atmosphere of Jupiter in 1995. It made many detailed measurements of pressure, temperature, composition, etc. down to conditions of 22 bars, 450 K, surviving for 57 minutes. Extrapolating from its findings, we concluded that ten hours after its entry, it had evaporated but never hit "bottom."

The fact that these planets are primarily fluid and lack surfaces frustrates the simplest aims, like determining their rotation rate without solid benchmarks. For decades, we have assumed that regular variations in radio emissions faithfully track true rotation rates, but alas, by this standard, Saturn's rotation has slowed down by six minutes since 1980 (See Anderson and Schubert, 2007.) 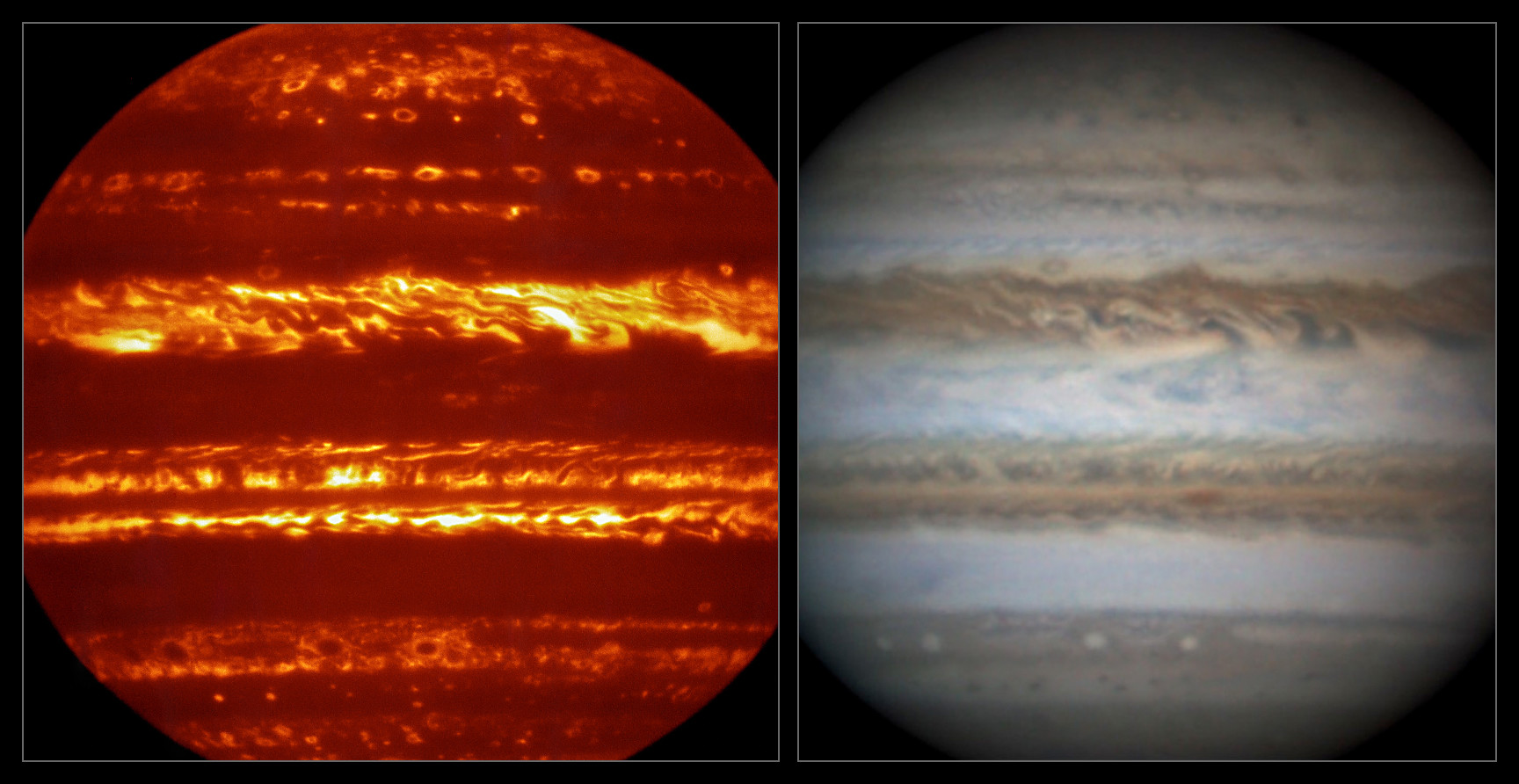 Jupiter in infrared and visible light from University of Leicester
Jovian planets are differentiated:

For all their strangeness, jovian planets share this with the solid worlds. Heavy materials have, to at least some degree, sunk to the core and lighter ones risen toward the top. The result is that they were heated both by accretional heat and gravitational release. Indeed:

Indeed, differentiation distinguishes jovian planets (in our solar system or others) from the next larger class of objects - brown dwarfs: Objects too small to ignite nuclear fusion, but with enough primordial heat that their interiors are churned by convection and don't differentiate. (Brown dwarfs range in size from roughly 12 - 80 Jupiter masses. None of these in our solar system, BTW, although astronomers have been identifying them for about 20 years (See Thackrah at al., 1997). They are difficult to detect because they primarily radiate in infrared rather than visible light.)

So what do we actually know? We begin by considering Jupiter and Saturn.

Jupiter's interior from James Schombert - Physics - University of Oregon
Our models of Jupiter's interior come from observations of its mass obtained by orbital dynamics. These enable us to calculate volume and bulk density. Finally observations of gravitational interactions with its moons and with spacecraft allow us to calculate moment of inertia.

We conclude that Jupiter is primarily composed of hydrogen, with volatiles such as water, ammonia, methane, and other compounds as trace substances. It is differentiated into:

Recall that metallic bonds occur in substances that easily lose electrons from outer orbitals in such a way that they share them promiscuously. Typically at Earth's surface these are solids that form cations easily like sodium or heavier atoms with many electrons in their outer orbitals like gold. On Earth, hydrogen typically forms polite covalently bonded molecules of H2. At the enormous pressures of Jupiter's interior, however, hydrogen molecules are compressed to the point that they, too begin sharing electrons. Small quantities of this exotic stuff have been synthesized briefly in laboratories using shock wave guns (right). 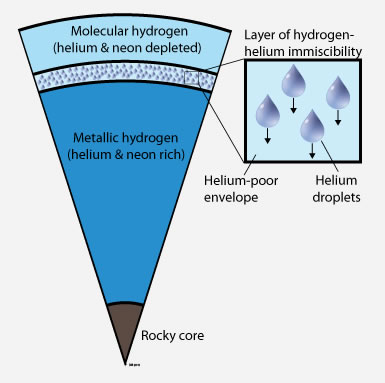 Jupiter differentiation schematic
Helium: Helium and metallic hydrogen are thought to be immiscible, such that helium would form droplets in an emulsion rather like oil and vinegar in salad dressing. The settling of helium is a source of heat from gravitational release.

Being fluid has consequences:

We use the term "atmosphere" here to denote the layer of Jupiter with sufficiently low temperature and pressure that its major components have not passed their critical point and can be identified as liquid or gas. Jupiter shows a typical atmospheric temperature profile, with: Jupiter's primarily hydrogen atmosphere is decorated by colorful clouds of trace substances which were predicted by chemical models to contain:

The Galileo atmospheric probe tested these models by sampling down to a depth of 21 bars. Ammonia clouds were encountered but clouds of ammonium hydrogen sulfide and water were not positively identified (Isbell and Morse, 1996). Odd. Either the models are in serious error (!) or the probe entered a relatively "dry" spot.

Whatever their composition, the clouds enable us to track the motion of atmospheric winds. These reveal that the atmosphere is divided into counterrotating latitudinal bands, and is marked by cyclonic storms like the Great Red Spot (right). These are typically short-lived, but the Red Spot has been active for at least 351 years.

Wind velocity: Jupiter's magnetic field accelerates ions in the planet's ionosphere, causing them to emit radio waves. The field is slightly inclined with respect to its rotational axis, so there are daily peaks in radio emission associated with it. Although determining wind speed with respect to a fixed location on the surface is impossible, global rotation can be approximated using regular peaks in radio emissions, revealing the 9.925 hour day. Movement of visible atmospheric features can be clocked and compared to the global rotation rate to determine wind speed. And what is that speed? Tops speeds between 160 m s-1 and 220 m s-1.

The Zones and Belts of Jupiter from Wikipedia
Convection: The atmospheric bands alternate between: This broadly resembles convection on Earth. There are differences,however: How far down these convection cells go is enigmatic, but preliminary data from Juno suggest depths of up to 1900 km. The interactions of counter-rotating zones and belts power cyclones like the Great Red Spot. This storm has been active for at least 400 years. Could its end be approaching? Harrington, et al., 2014 notes its significant size reduction over the last century. Smaller storms come and go on the order of years and decades. The Galileo mission also observed lightning associated with short lived thunderstorms.

From its polar orbit, Juno has shown us that the system of belts and zones breaks down at high latitudes, giving way to a complex region of cyclonic storms. Remember that, the majority of this huge object is made of an electrical current conducting fluid. We would expect it to have a strong magnetic field, and with a magnetic dipole 20,000 times that of Earth's, Jupiter doesn't disappoint. This powers a magnetosphere that is large because of:

In many ways, Jupiter's magnetosphere is like Earth's only larger: Jovian magnetosphere with Io plasma torus from Jill Bechtold, University of Arizona
Io plasma torus: One big difference is that in addition to other belts of charged particles, Jupiter's magnetic field traps and ionized material blown off of Io by volcanic activity, to form the Io plasma torus.


Rings: Jupiter's small, faint ring system was discovered by Voyager 1. It consists of dust particles roughly the size of the particles in cigarette smoke, that have been blasted from the surface of its very small inner moons.

Saturn is mostly a more benign and less extreme version of Jupiter. Although possessing 0.3 times Jupiter's mass, its internal structure is similar, with a somewhat smaller proportion of metallic hydrogen.

Atmospheric structure and composition are similar, although Saturn's atmosphere, being less gravitationally compressed, is deeper than Jupiter's.

Indeed, all of Saturn is less gravitationally compressed. Between this and the lightness of its major constituents (hydrogen and helium) Saturn, with a mean density of 0.69, is the least dense object in the Solar System. Saturn seen by Cassini from Jodrell Bank Centre for Astrophysics
Some consipicuous differences from Jupiter:

Belts and Zones: Saturn's atmospheric banding, while containing zones and belts, is much more subdued than Jupiter's.

Wind velocity: Whereas Jupiter's wind directions match boundaries of zones and belts, Saturn's do not. Instead, equatorial winds are generally much faster than those near the poles. These approach 500 m s-1, nearly 2/3 the speed of sound. Saturn's magnetic dipole is 8000 time the strength of Earth's but less than half that of Jupiter. Thus, its magnetosphere,while impressive is less than Jupiter's. Like Jupiter, Saturn:


Rings: Saturn's ring system appears to be derived from more than one source, and to consist of icy particles ranging in size from 1 cm. to 10 m.

What would a jovian planet look like if it had no metallic hydrogen? Stay tuned for Uranus and Neptune.