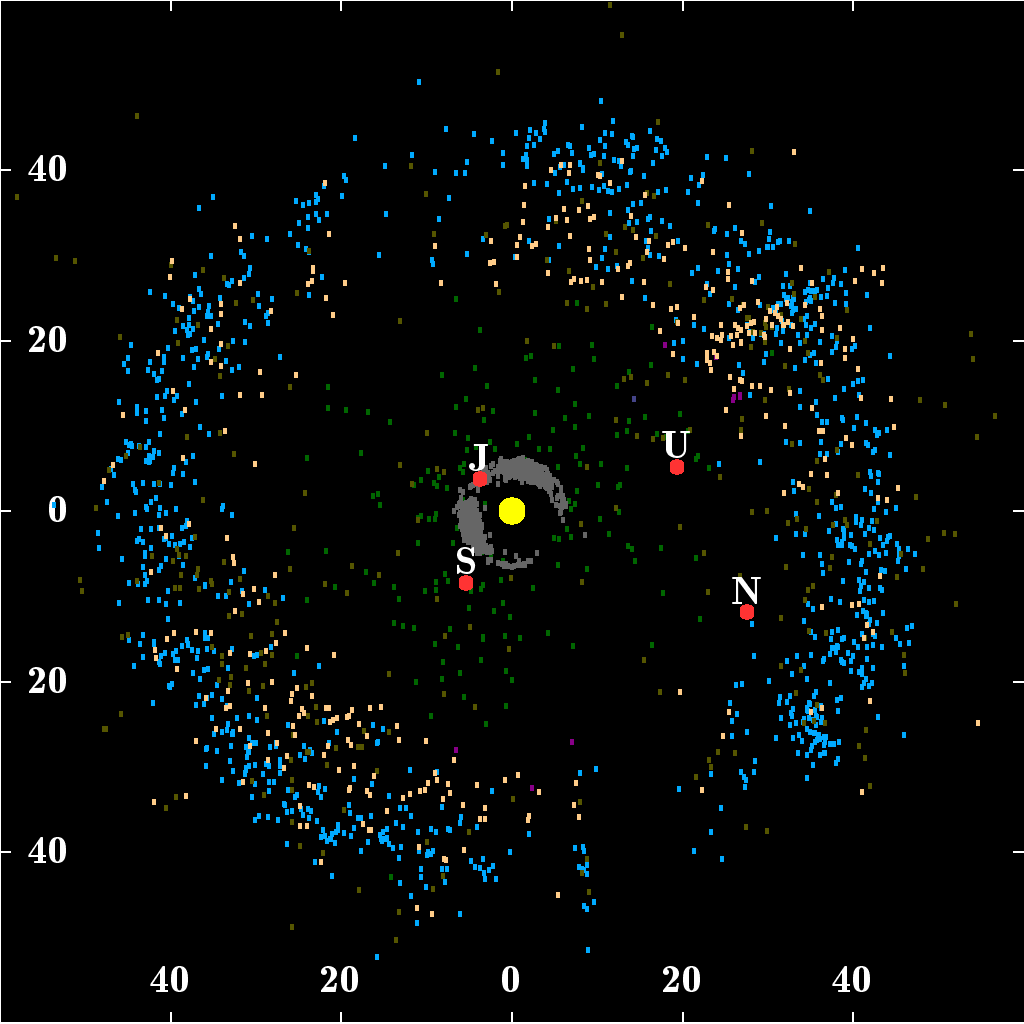 Trans-Neptunian objects, centaurs, and trojans as of 2015 from Wikipedia
As we begin our survey of minor bodies of the Solar System, we need to remember that: For convenience, we recognize three major reservoirs of minor bodies: Some objects defy ready classification, including:

Objects that inhabit the inner Solar System are:

Nomenclature: An asteroid's official name combines a name from Greco-Roman mythology, prefixed by a number representing its order in the discovery of asteroids. The first asteroid, 1 Ceres, was discovered by Giuseppe Piazzi in 1801, who regarded it as a new planet. The term "asteroid" referred to its telescopic appearance as a star-like point of light. The quick discovery of 2 Pallas (1802), 3 Juno (1904), and 4 Vesta (1807) made it clear that asteroids were not "normal" small planets but a new class of object.

The main asteroid belt lies between Mars and Jupiter. It consists of bodies that did not accrete into a larger planet, because of the gravitational influence of nearby Jupiter. There are >100,000 asteroids known, and it is expected that there are countless more that are too small to be detected. There are relatively few large asteroids. The largest body in the asteroid belt, 1 Ceres, is a dwarf planet with a diameter of 974 km. The total mass in the asteroid belt is only ~0.001 Earth masses.

Kirkwood gaps from Wikipedia
Origins: The proximity of the main asteroid belt to the orbit of Jupiter is no coincidence. Models indicate that as it neared its current size, Jupiter disrupted the accretion of planetesimals in its immediate vicinity by perturbing their orbits to prevent their achieving orbital stability. The result was frequent collisions. Some larger asteroids, including 1 Ceres and 4 Vesta, appear to be fully differentiated bodies with cores and mantles. Others are the fragmented remains of such bodies. Yet others are essentially undifferentiated chondrites.

These give us convenient reference points. For the purpose of this course: Asteroid collision
Asteroids continue to collide into one another regularly, because their orbits are elliptical and somewhat inclined from the ecliptic plane. These collisions release many smaller chunks, some of which find their way to Earth as meteorites. This makes the asteroid belt one region of the Solar System that we can sample directly without having to go there.

Without robot spacecraft, we would have two general sources of asteroid information:

Spectroscopy: Meteorites confirm what spectroscopic analysis tells up about the composition of asteroids - they are heterogeneous. Planetary scientists have developed a taxonomy of spectral types that includes:

Meteorites: Most meteorites originate in the main asteroid belt, and their composition generally confirms to the spectral types above. Prior to spacecraft missions, a consensus emerged that asteroids represented:

We now know at least some asteroids have distinct crusts as a result of Day et al., 2009 report of a meteorite made of the intermediate igneous rock andesite. This was vindicated by data from the Dawn spacecraft at 4 Vesta revealing that it was fully differentiated, with a crust, mantle, and core (see Russell et al. 2013.) Asteroids Ida and Dactyl from Wikipedia
Galileo on its way to Jupiter made the first up close asteroid observations as if flew past the main belt asteroids: 433 Eros from University of Wisconsin
NEAR Shoemaker rendezvoused with and orbited the near-Earth asteroid 433 Eros in 2000-2001. En route, the spacecraft flew past 253 Mathilde, also an S-type. 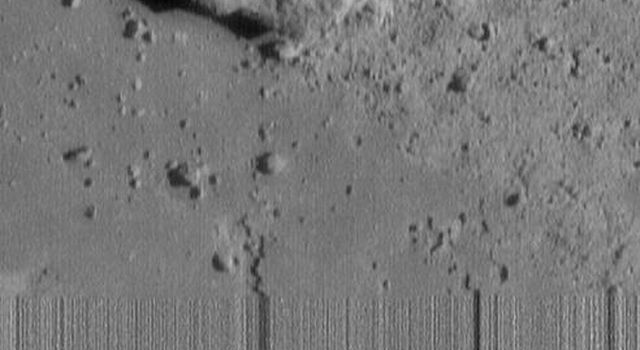 Surface of 433 Eros from NASA
NEAR revealed a heavily cratered surface, and numerous boulders, including a house- sized boulder that has rolled down into the large crater. At the end of its mission, the NEAR vehicle, although not designed to return data from the surface, was "soft landed" on 433 Eros. This is one of the last images returned The image is 12 m high. The surface is rocky, with a heavy layer of regolith. The composition is similar to that of stony meteorites and other S-class asteroids.

Itokawa was revealed to be:

The conclusion is that Itokawa is a porous rubble-pile of fragments held together by very weak gravity.

4 Vesta, 433 Eros, and 1 Ceres to scale from Wikipedia
Dawn launched on Sept. 27, 2007 and crossed the orbit of Mars to closely study two bodies in the main asteroid belt: the asteroid 4 Vesta (2011-2012) and the dwarf planet 1 Ceres (2015-present). 4 Vesta orbits at 2.36 AU, just inside the 2.5 AY Kirkwood gap, whereas 1 Ceres, at 2.76 AU inhabits the central region of the asteroid belt, and is distant enough that ices condensing directly form the solar nebula should be major compositional constituents.

Dawn is also a technological breakthrough:

162173 Ryugu from Wikipedia
Hayabusa 2 Entered orbit around asteroid 162173 Ryugu in June of 2018. It has dispatched small landers to the surface, has retrieved surface samples, and is on its way back to Earth (arrival in late in 2020.)

101955 Bennu from Wikipedia
OSIRIS REx Entered orbit around carbonaceous chondritic asteroid 101955 Bennu in December of 2018. It will retrieve a surface sample for return to Earth in 2023. 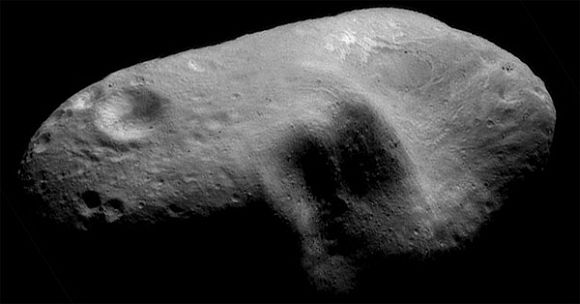 Asteroids are mostly irregularly shaped, heavily cratered, and covered in a dusty regolith, indicating that they are geologically dead. On inspections, asteroids present certain distinct peculiarities (as in 433 Eros - right.): 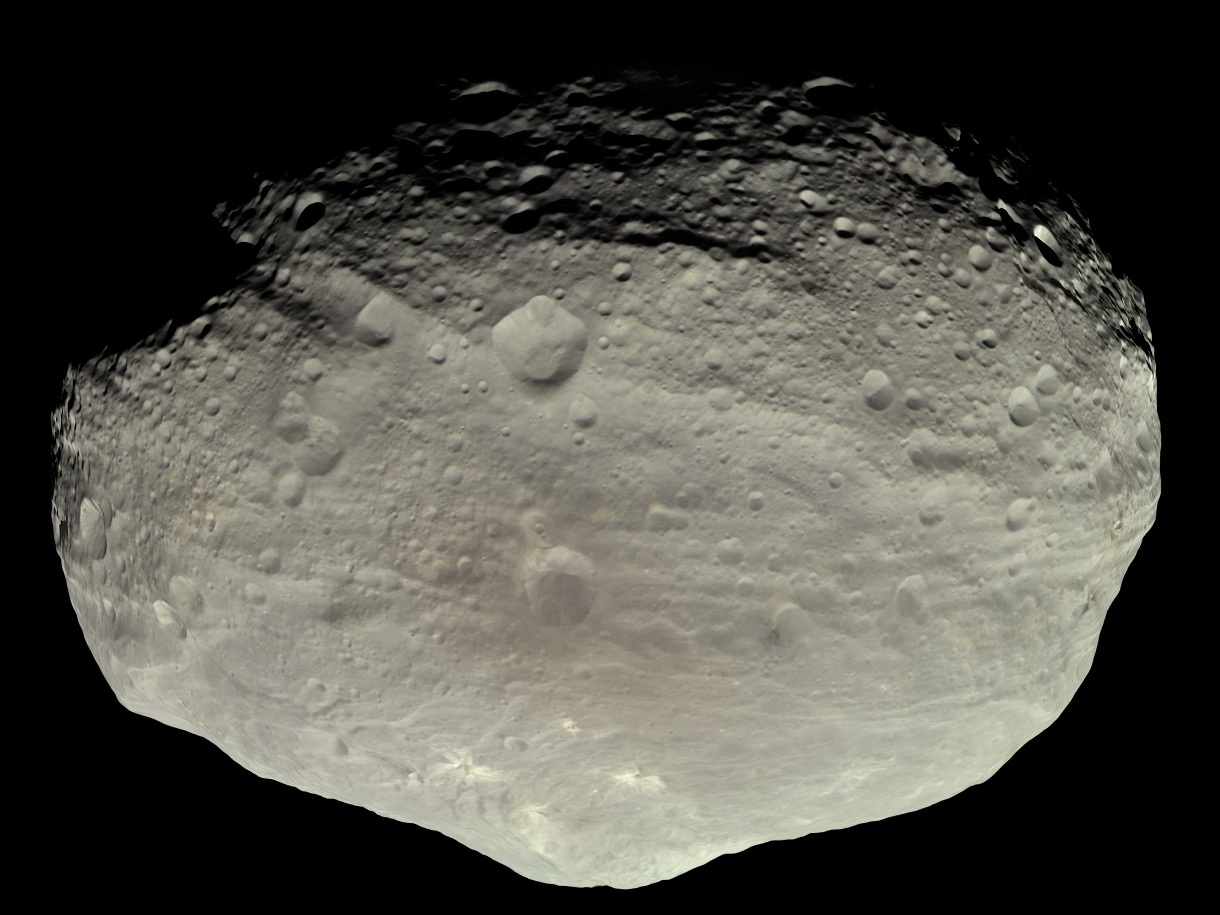 After two years of study by the Dawn mission, 4 Vesta begins to come into focus. 4 Vesta's specs:

Because of its differentiation, 4 Vesta is sometimes called "the littlest terrestrial planet," but in fact it more resembles the planetary embryos that coalesced in the early Solar System to form the planets. 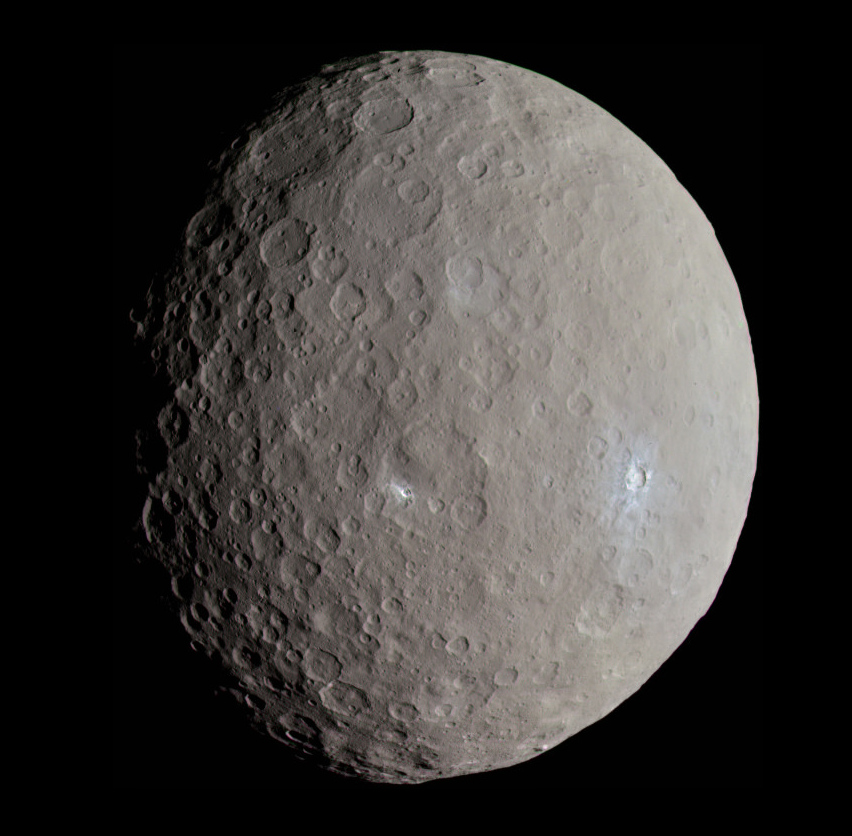 1 Ceres is the largest object in the main asteroid belt and contains a third of its mass. It is the only asteroid to qualify as an IAU "dwarf planet," being massive enough to pull itself into a sphere.

Orbit: Composition: 1 Ceres' surface spectrum makes it a C-type asteroid (i.e. chondritic), but with evidence of hydrated minerals (minerals that incorporate water in their molecular structure) such as clay minerals. Where would the water for this come from?

How did it get there? Possibly the evaporite crust left after freshly exposed ice or brines sublimated.

Ahuna Mons from Wikipedia
Ahuna Mons: A 5 km high mountain in the middle of nothing formed by - what? 2019 research by Neumann et al. uses gravitational anomalies to infer that it is a mud volcano, formed by a rising bubble of muddy brine. Key concepts and vocabulary: Additional reading: