Exoplanets - How do we know anything about other solar systems?

Extrasolar planet or Exoplanet - Any object that would fit the IAU definition of a planet but for the fact that it circles a star other than the Sun. This typically excludes Brown dwarves: Objects from 13 to 80 Jupiter masses that have undifferentiated convective interiors, do not experience sustained fusion of hydrogen, but may sustain brief episodes of fusion of deuterium (2H).

HR8799 from Wikipedia
The image at right shows HR8799 and its three planets - the first solar system to be observed directly. Direct methods imaging of exoplanets are highly problematic because planets are extremely dim compared to the stars they orbit. Observations have been made by coronagraphs, instruments that block the light of a bright object (originally developed for viewing the Sun's corona) and allow viewing of faint objects near them. Even so, the only planets that can be seen are:

Exoplanets are designated by affixing a lower-case letter to the name of their star. Successive discoveries get sequential letters. E.G.: Fomalhaut b is the first planet to be discovered orbiting Fomalhaut. If another exoplanet were to be discovered there, it would be called Fomalhaut c. (The sequence of letters indicates nothing about the exoplanet's mass or semimajor axis. "Fomalhaut a" is the star, itself.)

Note: Members of multiple star systems are designated with upper-case letters in order of descending mass. Thus, the Alpha Centauri system contains α Centauri A and α Centauri B, but α Centauri A is slightly larger. When exoplanets are involved, we combine the two systems. E.G.: α Centauri Ab would be an exoplanet circling α Centauri A.

In contrast, indirect methods of exoplanet detection are proving very effective. As of November, 2018, 3,874 confirmed exoplanets have been found indirectly, and many more candidate worlds are known.

Radial velocity: As an exoplanet orbits a star, the star moves in a small orbit around the system's barycenter or common center of gravity. This results in variations in the speed with which the star moves toward or away from an observer on Earth, causing displacement - red or blue shifting - of absorption lines in its spectrum. These displacements can be measured with great precision (down to 1 m/s), allowing the star's orbit around the barycenter to be calculated. From this the orbital properties and mass of the orbiting planet can be inferred.

The transit method from The TEP Network
Transit method: If the plane of an exoplanet's orbit is aligned with Earth, then when the exoplanet crosses in front of the star, eclipsing it, there will be s slight drop in the star's observed brightness. The amount of dimming depends on the star's and exoplanet's relative size. After the radial velocity method, this has been the most productive. This method has pros and cons: The Kepler Orbital Observatory coverage area
The Kepler Mission: From 2009 to 2013, the Kepler spacecraft scanned stars in a section of the sky with unprecedented sensitivity, searching for transiting planets. Kepler has detected transiting Earth-sized exoplanets. As of July 2016 it had discovered 2326 confirmed by additional observations. 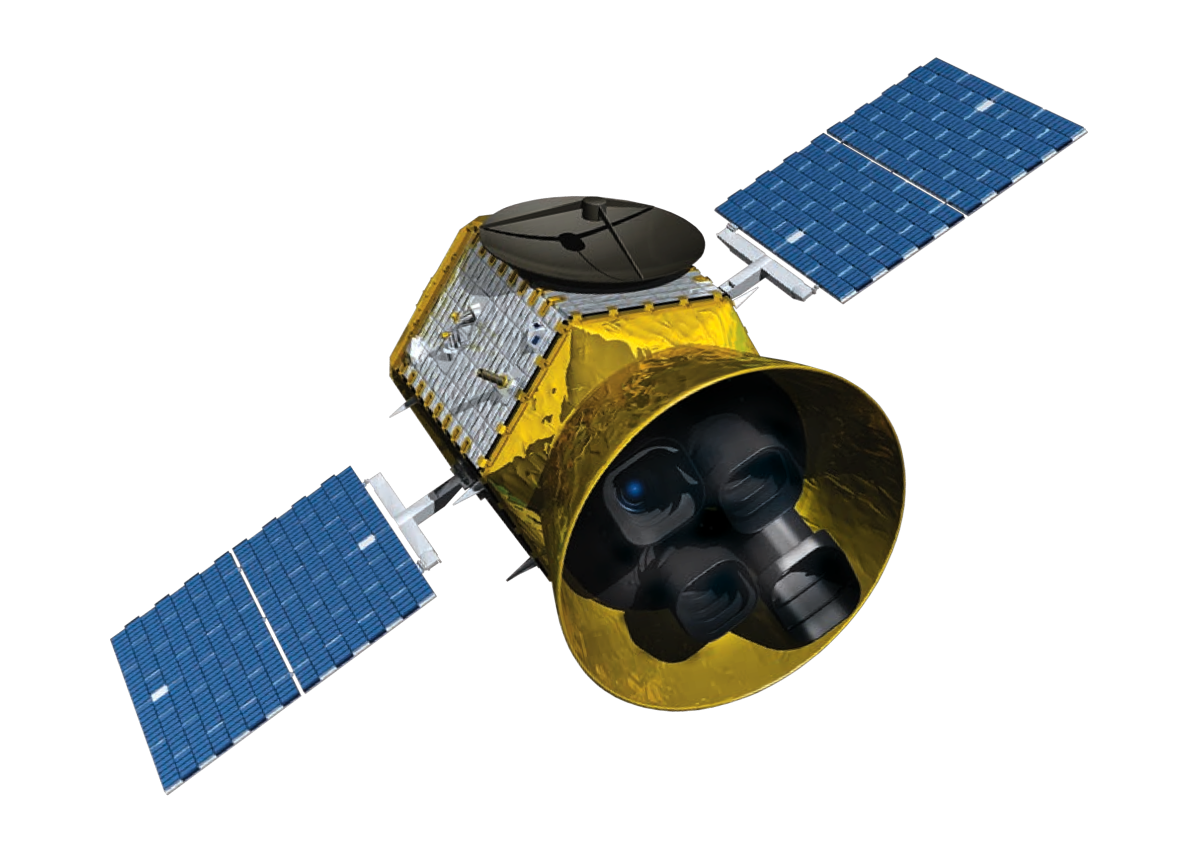 Note: Both of the radial velocity and transit methods have observational biases, favoring the discovery of exoplanets that are: 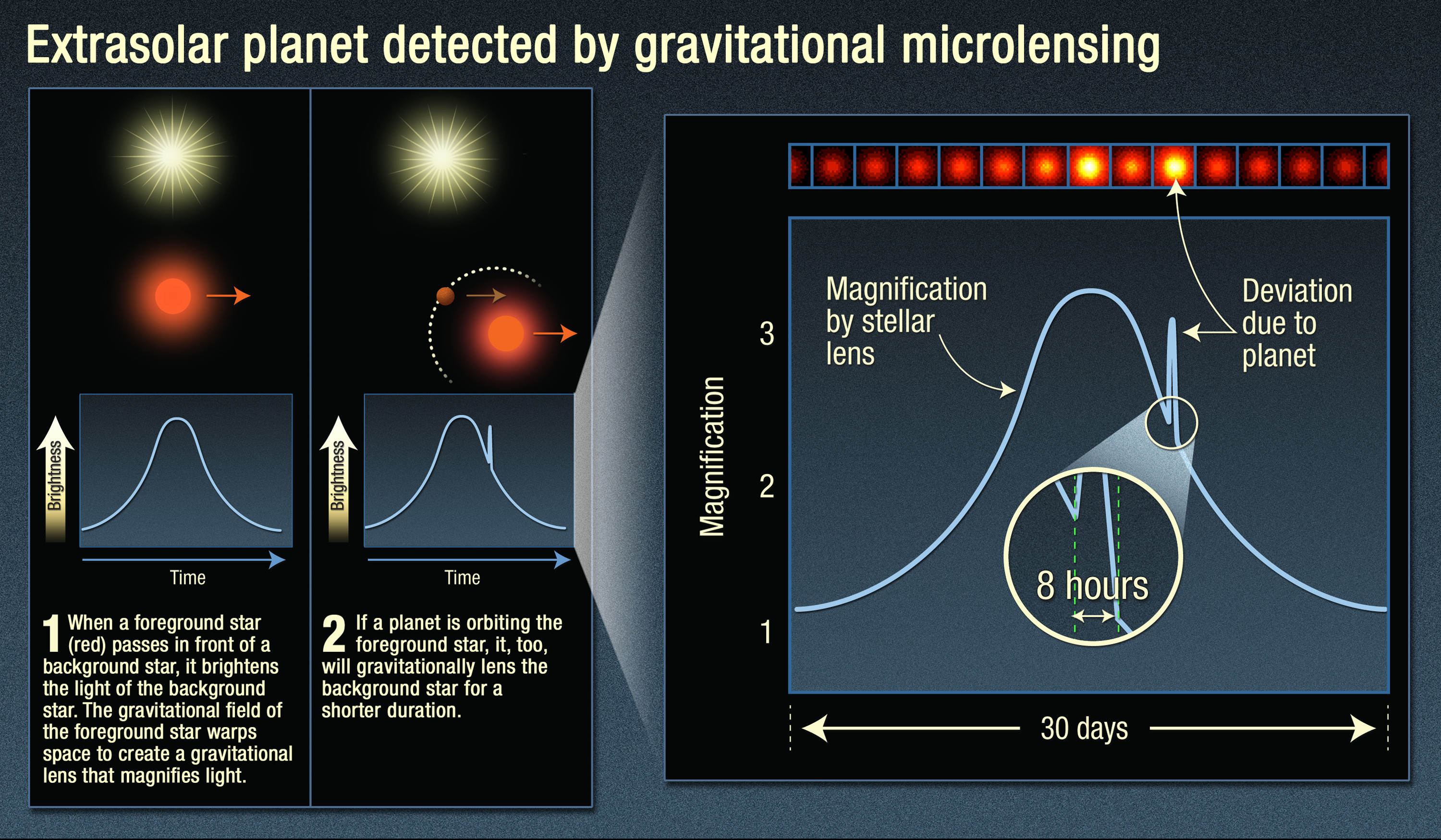 From NASA
Gravitational microlensing: Gravitational lensing occurs when the gravity of a massive object focuses light coming form an object behind it. This is frequently observed in galaxies but can also be caused when two stars are aligned along a line of sight from Earth (microlensing). In this case, because the alignment must be perfect and Earth and the stars are moving relative to one another, microlensing events are brief (days or weeks).

The impressive part is that if the lensing star has an exoplanet in orbit, the exoplanet's gravity can have a detectable effect on the lensing. 130 exoplanets have been identified this way. Pros and cons:

Pulsar timing: A pulsar is type of neutron star, a super-dense remnant of a star that has exhausted its nuclear fuel. These objects compress not just the mass but the magnetic energy of the original star into a very small volume. These powerful magnetic fields focus radio emissions along field lines. Called pulsar because the rotation of these focused radio emissions as the pulsar rotates appear to an observer on Earth as regular radio wave pulses. Gravitational interactions between pulsars and planets orbiting them result in perturbations of the period of the pulses that can be detected and interpreted. Yes, Virginia, there are exoplanets circling pulsars with seven having been discovered.