Sedimentation on continental shelves (where ocean depths are less than 200 m) are continuous with coastal plain sequences. In clear tropical waters these accumulate abundant carbonates (to be considered later), but in cold water or areas with high siliciclastic inputs, the shelves are covered by fine sands, silts, and muds. During sea level highstands continents are flooded creating large epeiric seas (E.G. Late Carboniferous North America) that may accumulate abundant sediments.

Caveat: Many contemporary continental shelf deposits are continental and marginal marine deposits laid down during Pleistocene lowstand. Although these have been reworked by marine processes, they aren't characteristic of equilibrium marine sediments and may not be good analogs for ancient sedimentation.

Depending on which factor predominates, typical shelves are storm dominated or tide dominated. 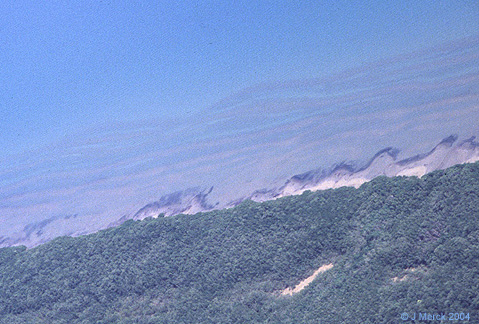 Coasts have linear sand ridges with variable cross bedding and hummocky cross-stratification, with low-angle curved intersections and upward domed laminae. This bedform is formed at water depths of 5-15m between fair weather and storm wave base. Typically much smaller than tidal sand waves.

Wave-ripple cross-bedding displays storm and wave influence, but no tidal effects. Wave ripples have an irregular undulatory lower bounding surface, a less trough-like shape, bundled forsets, swollen lenticular sets, and draping foresets. These are unusual in that they display the effects of rapidly reversing wave flow, and often show lenticular and flaser bedding.

Where storm and tidal energy is not sufficient to move sediments, deposition of silt and mud predominates - The blank canvass on which wave and tide action "paints" coarser sediments. The typical sequence of a shallow siliciclastic shelf is dominated by storm and tidal processes, but changes in relative sea level are the primary source of sediments and structures on which these forces act. Characteristic stratigraphic profiles are recognized based on whether sea level is regressive, transgressive, or balanced (right). The continental slope between the shelf and deep ocean floor is relatively narrow (10 to 100 km) and slopes downward at an average angle of 4 to 6 deg. Sediments are moved downslope by gravity, disloged from the shelf/slope break by storms or earthquakes.

The characteristic sedimentary features include:

A turbidity current has three parts:

As noted, turbidity currents mix with the ambient water, which decrease their concentration thereby slowing the flow and depositing sediment. This feedback process promotes deposition of a turbidite.

Turbidites: We referred to Turbidity currents periodically moving coarse sediments down the delta front. In fact, these are the primary down-slope movers of submarine sediments altogether, and characterize continental slope deposition.

Caveat: You generally don't see the entire Bouma sequence in a single turbidite!


Ignition: A flow may additionally erode its substrate thus adding mass to its body. This would increase sediment concentration, accelerating the flow and increase erosion. This positive feedback loop is called ignition and promotes erosion. Due to this effect, continental slopes are generally places of sediment bypass, while adjacent basin floors (continental rise) are sites of sediment aggradation.

Key thought: In marine environments, turbidity flows are analogous to streams in continental settings in their ability to: As a result, we see submarine channels, levees, and deltas that are reminiscent of those on the continent.

In the modern world, deep-water systems begin below the continental shelf edge. When sea level was at the shelf edge, "deep water" meant deposition below storm wave base farther down the continental slope. Basins may be 100's or 1000's of meters deep. Commonly, they are characterized by margins steeper than 0.5 deg., and commonly 1 deg.-3 deg. gradients. Deep-water systems are one of the few depositional environments where significant volumes of massive (i.e.structureless) sand accumulate (most other environments have cross-bedded sands).

Deep-water deposits can be broken into two main categories and associated environments. All environments are channelized due to the action of turbidity currents.

Submarine fans: Fan-shaped bodies of coarse sediment accumulate where turbidity current flow is unconfined. This usually occurs at prominent decreases in local gradient, usually to less than 0.5 deg. As confinement and gradient decrease, flows decelerate and drop their load. This means that proximal fans are dominated by Ta beds whereas distal fans can have more Tb and Tc beds. Deceleration also decreases erosional capacity of flows. This means that fans are commonly more channelized in their proximal positions and more sheet-like in their distal positions. Channel networks on fan avulse regularly, shifting the short term site of deposition.

Leveed channels: When turbidity currents are tall enough to overflow their channels, they become unconfined and decelerate. However, only the low concentration portion of the flow does so. As flows move away from the channel, they get progressively finer grained & lower in concentration. This effect builds levees with the following characteristics:

Many other kinds of sediments can be found in deep-water environments.

Slope mudstones: Silts and clays are brought into the deep water in two ways:

Mass-transport complexes: The continental slope accumulates more or less at the angle of repose for water-saturated muds. As such, it is highly susceptible to failure and mass-wasting. This failure will begin as slumps or slides, which preserve much of the original bedding of the parent and are preserved as olistoliths. If the failed material shears enough and moves enough, it can homogenize into a debris flow, yielding an olistostrome. Debris flows, slumps, and slides can accumulate into very thick packages of sediment called mass-transport complexes (MTC's) and are usually made of slope mudstones that fail and accumulate locally. As such, MTC's are usually very fine grained. The individual failures can be VERY large, covering 1000's of km2 and be 10's to 100's of meters thick.

Abandonment/Drape: During transgression, sediments are sequestered high on the continental shelf. As such, almost no sediment reaches the deep-ocean. This leads to abandonment of active portions of the continental slope and abyss. Abandonment successions are enriched in fine pelagic sediments and are often assoiciated with organic enrichment.

Pelagic sedimentation: These fine-grained sediments rain out of the ocean column slowly to accumulate on the sea floor. The sediments may enter as:

Depending on the state of ocean chemistry and circulation, carbonate will dissolve at very great depths. This level is called the carbonate compensation depth or CCD. Think of this like a snow line in the ocean, which due to lower pH below (rather than higher temperatures) carbonate dissolves. The ocean floor deeper than about four kilometers is corrosive to carbonate, so these sediments do not accumulate there.