Animals in the broadest sense.

The phylogeny of major animal groups appears at right. Included are:

Protostomia contains the vast majority of animal diversity, including many familiar animals. Among them are two major groups: There is a trend in many bilaterian groups including active animals toward the evolution of special sense organs (eyes, antennae) and toward concentrating them at the front end along with an expansion of the nervous system to deal with the information they provide (heads).

And yet, these structures originate independently. Consider some close relatives of the major groups: Priapulids for ecdysozoans, and phoronids for Spiralians.


Living deuterostomes were first identified by "deuterostomous" developmental characters (later). This identification had little to do with their outward morphology. Indeed, the major groups are an odd assortment: Acorn worm from The Telegraph
Hemichordata: (C. - Rec.) Including


Yet wonderfully, the illumination of Cambrian fossils on the stems of each of these groups has provided significant, if imperfect resolution. Of particular importance: Vetulicolians by Skelefrog from Deviant Art
Vetulicolia: Known from the classic fossil localities of Chengjiang (Yunnan Province, China) and Sirius Passet (Greenland). These animals encompass a range of shapes but have these characteristics in common:

The consensus interpretation (Vinther et al., 2011) is that:

How did deuterostomes (and bilaterians) originate? Han et al. 2017 report on Saccorhytus coronarius, a milimeter-scale critter from the basal Cambrian with a mouth and lateral openings but no anus. their phylogenetic analysis places it as a basal vetulicolian. Maybe. This points to the possibility that deuterostomes (and other bilaterians) originated as part of the minute meiofauna of the earliest Cambrian.

(Cambrian - Rec.) Vertebrate paleontologists have long predicted that the ancestral vertebrate would be, in essence, a swimming pharynx. The interesting surprise is that this seems to describe deuterostomes in general. This information enables us to propose morphological synapomorphies of Deuterostomia: As we will see, this interpretation meshes nicely with other emerging patterns in deuterostome evolution. 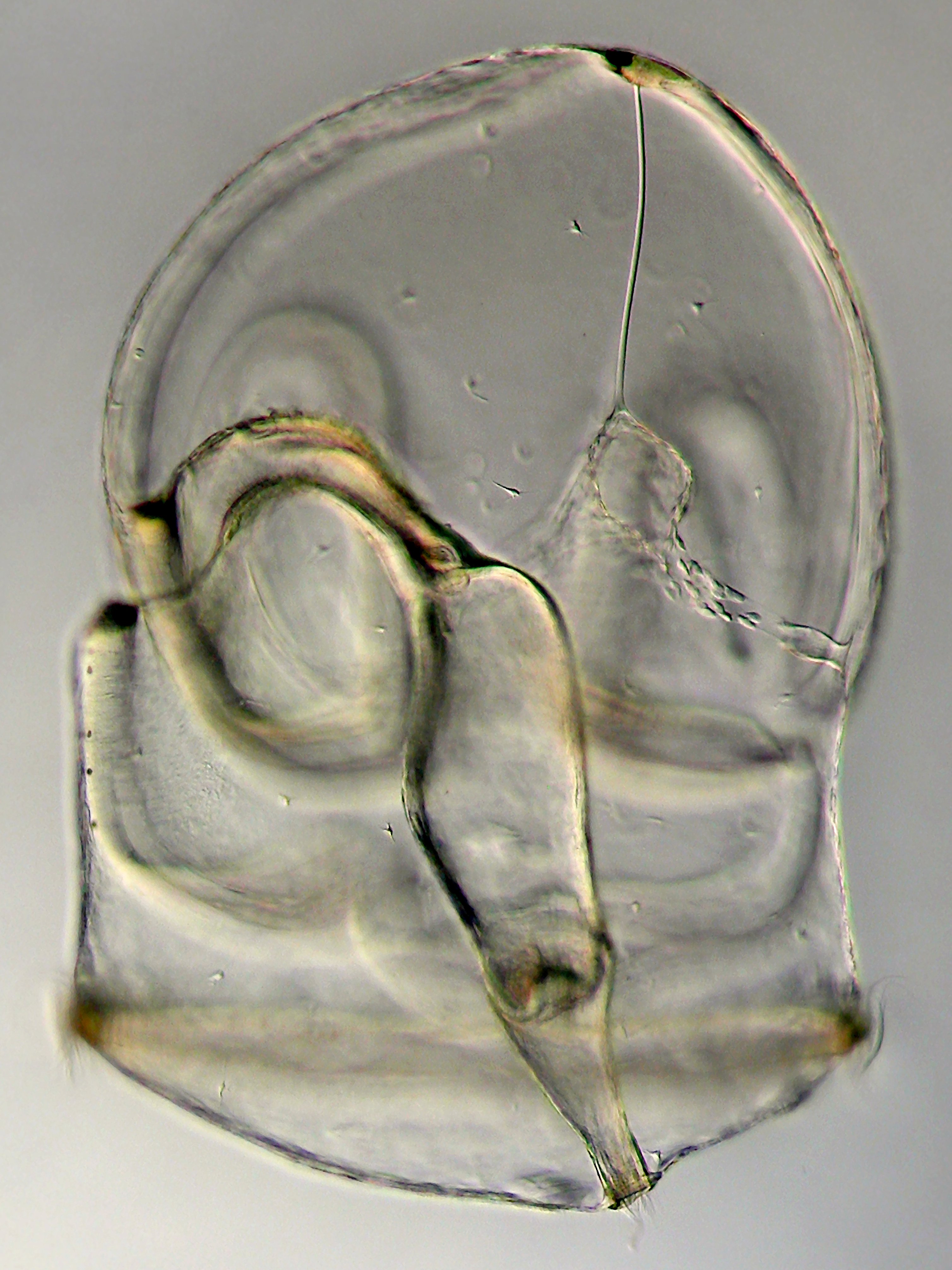 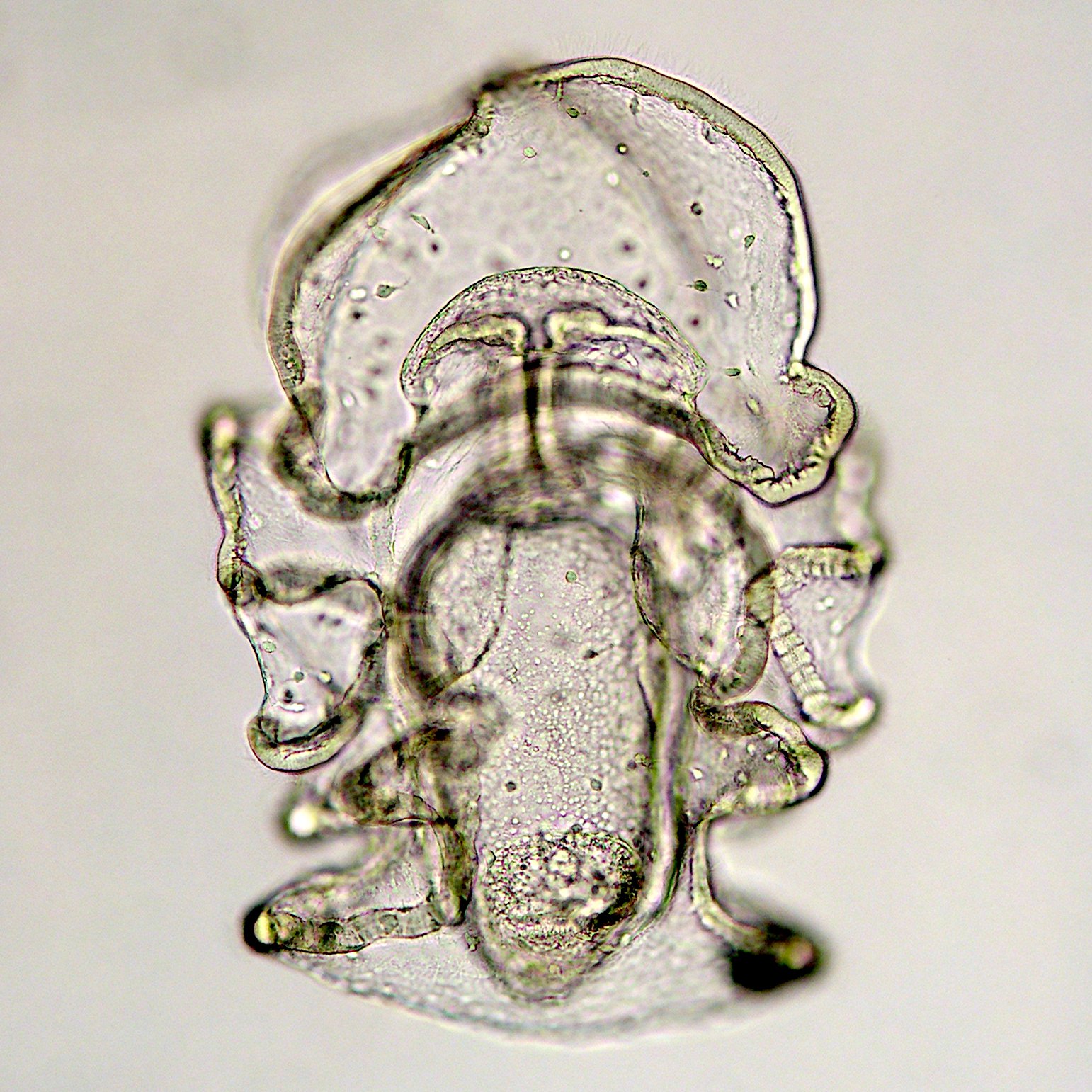 Recent molecular phylogenies indicate sister taxon relationship between Echinodermata and Hemichordata. Most members are suspension or deposit feeders, although some obtain food in more interesting ways. 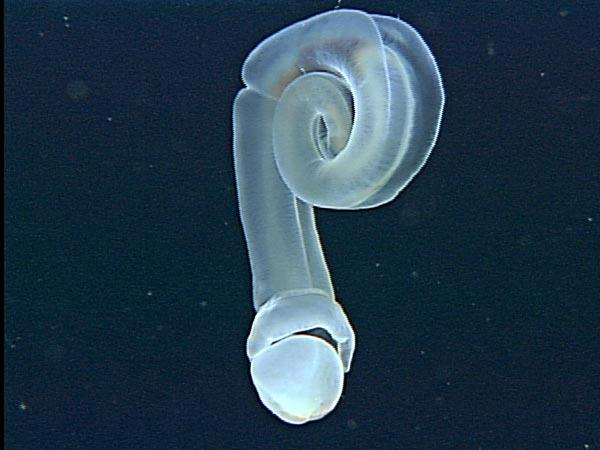 (Cam - Rec.) Solitary or colonial suspension and deposit feeders who use ciliated appendages to concentrate particle-rich water in pharynx, where it is filtered. Yunnanozoans: A final fossil group from Chengjiang (Early Cambrian), these creatures (including Yunnanozoon (right) and Haikouella) were described in the 1990s. These animals definitely had:

By most accounts they lacked: Yunnanozooans have been regarded as: The matter requires illumination, but your instructors suspect that they are near the base of the deuterostome tree. And yet, the most basal Cambrian forms approach bilateral symmetry and have been shown by Rahman et al., 2015, probably to possess a pharyngeal filtration system.

The sister taxon of Ambulacraria. Contains:

Schematic of ancestral vertebrate (showing chordate characters plus some)
from Radinsky 1987. The Evolution of vertebrate Design.
Characteristics:

The Burgess Shale fossil Pikaia gracilens, known from hundreds of specimens, is often cited in popular literature as the "earliest chordate." In fact:

Conway-Morris and Caron plausibly regard it as a "stem-chordate," closer to Chordata than to Ambulacraria, but just barely. What Pikaia does have is this potential synapomorphy with proper chordates:

Nomenclature: Earlier names have priority in scientific nomenclature. Unfortunately, the publication in which this animal was originally named (Branchiostoma) was largely ignored, and it was named a second time (Amphioxus). Additionally, there had been a common name (Lancelet). When the dust settled, Branchiostoma was acknowledged the proper scientific name, and amphioxus and lancelet are both considered common names. Live with it.

Anatomy: In many ways, Branchiostoma is like a modified version of Pikaia. Similarities include: 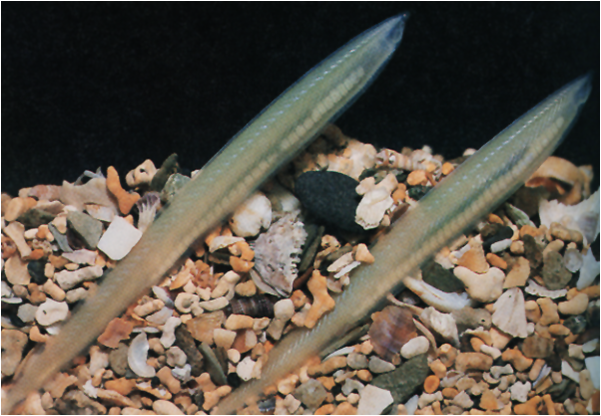 Branchiostoma life position
Branchiostoma ecology: Branchiostoma opens a window onto the ecology of the "swimming pharynges" at the base of Deuterostomia. It does not spend much time actually swimming, but, instead, buries itself in soft sediment, with its front end projecting into the water suspension-feeding. When disturbed, it swims in a fish-like manner, but soon settles down, digs in, and resumes suspension-feeding.

Cephalochordate fossil record: Sparse, but present as early as the Chengjiang lagerstätte in the form of Cathaymyrus diadexus (right).

Interpreting cephalochordates: For decades, cephalochordates have been presumed to be closely related to Chordata. They are so close morphologically. The Wizard need only give them hearts and brains. The next group, in contrast, seems more distant.

(Sparse record Cam. - Rec.) Also known as "tunicates" or "sea squirts." As adults, the body is dominated by a huge pharynx used for suspension-feeding. Adults of readily accessible species are typically attached to some hard surface, however many are free-swimming. They may be solitary or colonial. 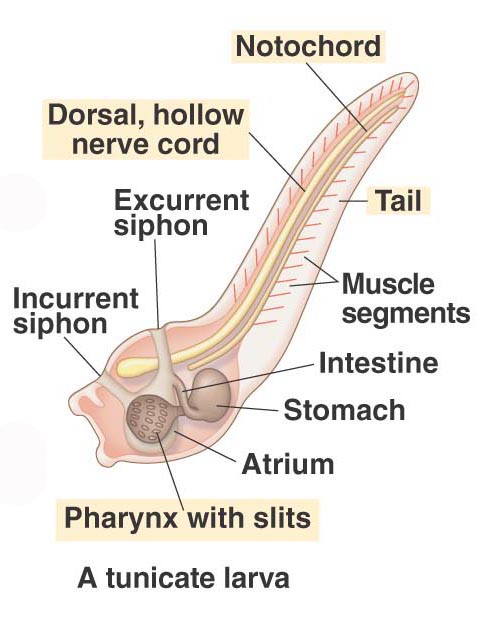 What a difference twenty years make.

When your instructors completed their PhDs, the consensus of deuterostome phylogenies held that:

Discoveries that have changed that view:

(Cambrian - Recent). Last common ancestor of lampreys and gnathostomes and all descendants. Pretty much includes all chordates with heads. Unambiguous synapomorphies include:

The special sense organs and hypophysis arise from the interaction of the neural tube with placodes of the outer ectoderm.

These features enable craniates to be:

Schematic of ancestral vertebrate (showing chordate characters plus some)
from Radinsky 1987. The Evolution of vertebrate Design.

In terms of metabolic rate and aerobic capacity, only cephalopod mollusks and some arthropods are comparable to craniates.


First, an inventory of the living groups: 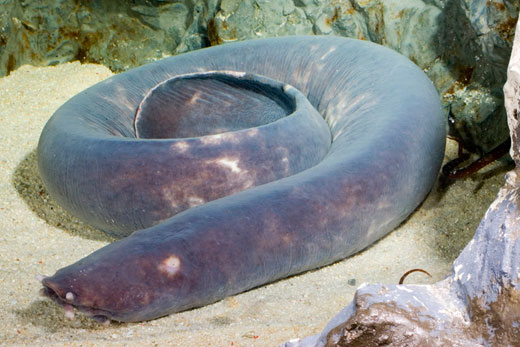 (Hagfish - Carboniferous - Quaternary). Synapomorphies of Hyperotreti: Hagfish display interesting behaviors and are endearing in a grotesque sort of way. All synapomorphies of Vertebrata are present in hagfish.

But hagfish lack many features we see in other craniates: 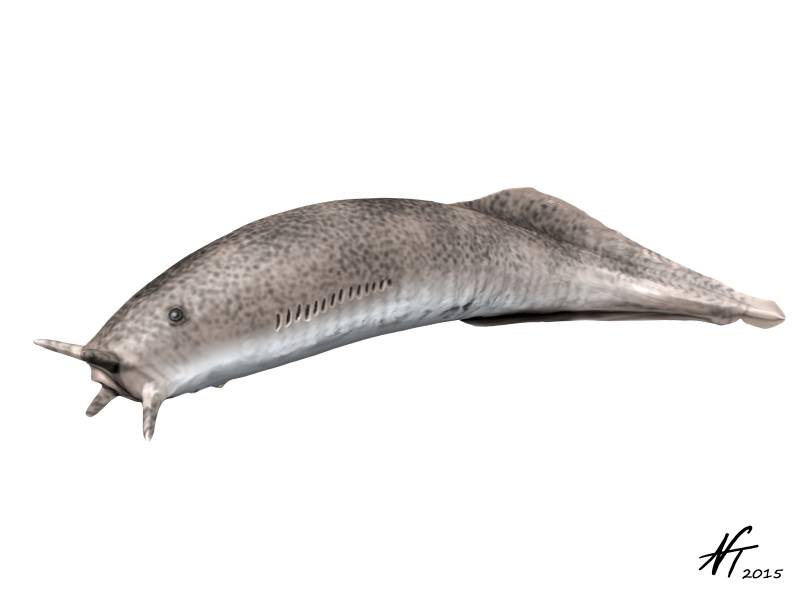 Myxinikela siroka by Nobu Tamura
Not surprisingly, hagfish have almost no fossil record. Potential fossil hagfish include (in order of descending quality of fossil) the stem hyperotretans: Of these, only Myxinikela preserves informative detail. Notably, it seems to lack slime glands and characteristic features of the head.


Within the crown of Myxinoidea, we have Tethymyxine (Cretaceous) from Miyashita et al., 2019, which displays all characteristic hagfish features.

Now it gets strange: Because of vertebrates' close relationship with urochordates and cephalochordates, we have assumed that lampreys' suspension-feeding ammocoetes larval stage was an instance of ontogeny recpaitulating phylogeny. According to Miyashita, 2018, a solid growth series for Priscomyzon shows that it lacks the ammocoetes phase, and hatches out as a tiny parasite. Apparently the ammocoetes ontogenetic stage is a derived feature of modern lampreys! This challenges our basic assumptions about the ancestral vertebrate being a vetulicolian-ike suspension feeder. Could the common ancestor of craniates have, instead, been a deposit-feeder? But there is more lamprey-feeding confusion... 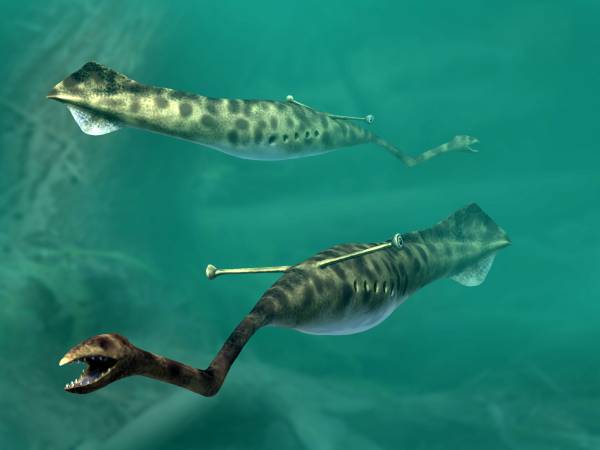 The lifestyles of vertebrates were revolutionized by the ability to process large food items.

Illuminating the relationship between Hyperotreti, Hyperoartia, and Gnathostomata is difficult and contentious. Two major hypotheses predominate that take their names from the positions they imply for lampreys:

(Devonian - Quaternary) Support for a close relationship of lampreys and hagfish is mostly molecular (E.G. Kuraku et al., 2009), however this support is widely replicated and very strong. Clear morphological synapomorphies are not obvious, but possible candidates include:

Evolutionary stages of chondrification of vertebrae:
Above - lamprey; below - shark

(Cambrian - Quaternary) The majority of morphological evidence (and at least one molecular analysis, Gürsoy et al., 2000) supports the monophyly of Vertebrata - lampreys and jawed vertebrates. Characterized by the presence of extensive internal cartilage ("chondrifications")

Although not strictly a synapomorphy, only vertebrates are known to secrete bony tissue containing hydroxyapatite (Ca5(PO4)3 (OH)). Thus the presence of bone is considered diagnostic for vertebrates, but there are some that don't have it.


This is a huge problem in vertebrate systematics that cries out for resolution. The last word is from Miyashita et al., 2019, who present for the first time a morphological analysis containing many fossil taxa that supports the Cyclostome Hypothesis! For the moment, we accept it, but await the fossils that will reveal the true depth of our ignorance.

What we really need is for a Cambrian konzervat-lagerstätte to cough up a fossil basal hagfish or lamprey. Of course, maybe they have and we haven't recognized it. ;-)