Chengjiang and the Burgess Shale provide an early glimpse of the first craniate chordates - stem vertebrates.

Haikouichthys ercaicunensis from Feinberg and Mallatt, 2013
Myllokunmingia and Haikouichthys: Chengjiang gives us the best picture picture of what the ancestral vertebrate might have looked like with Haikouichthys ercaicunensis (right - possibly junior synonym of Myllokunmingia fengjiaoa) (Shu et al., 1999) which seem to preserve: These have been boldly interpreted as basal vertebrates, in which the paired cartilages are arcualia and the fin texture is from cartilaginous fin-rays; and conservatively viewed as stem craniates, with the paired cartilages being branchial elements and the fin-rays being preservation artifacts.

Conodont elements
Euconodonta: (Cambrian - Triassic) Since 1856, paleontologists have been aware of minute (0.1 - 0.5 mm.) fossils made of apatite (calcium phosphate), the same mineral as vertebrate bone and teeth.

Conodont types
Conodonts came in four general shape classes (right) and were always found as disarticulated clasts in marine sediment. This situation led to the very reasonable but unsupported assumption that each type of element represented a different taxon.

At this point, speculation raged about:

Conodont apparatus
In the 1960s clarification came by the discovery of articulated groups of conodonts. For the first time it became clear that these elements (or most of them) worked together as part of a conodont apparatus.

Moreover, different elements began to be distinguished by the manner in which they were formed developmentally.

Since these seemed to appear in a stratigraphic (chronological) sequence, speculation was that these growth forms represented evolutionary stages. Not quite. In 1988, single cone elements were eliminated from the roster of euconodonts by the discovery that they were the fossils of early chaetognaths. In living chaetognaths, similar elements are made of calcium carbonate and are used in prey capture.

Euconodonts
We now have an emerging consensus on what the "conodont animal," now the monophyletic group Euconodonta, looked like - a small, eel-shaped chordate.

But where does Euconodonta go on the chordate cladogram? The presence of phosphatic hard parts arguably places it, closer to Gnathostomata than to hagfish or lampreys, but there are concerns:

Goudemand et al. 2011 describe the well-preserved conodont apparatus of Novispathodus, concluding that it was protracted during feeding by a rod-and-pulley arrangement similar to that of lampreys and hagfish. It seems plausible that such an arrangement is plesiomorphic (ancestral) for craniates. Link to animation.

We have such a copious record of heavily armored Early Paleozoic forms that it is tempting to forget that the group's most basal members (like Myllokunmingia) essentially lacked hard tissues. Indeed, the early evolution of Vertebrata is marked by the diversification of bony tissues and their proliferation through the body. This pattern is illuminated by Sansom et al., 2010 and Miyashita et al., 2019. So, we start with a review of bony evolution as revealed in these studies. 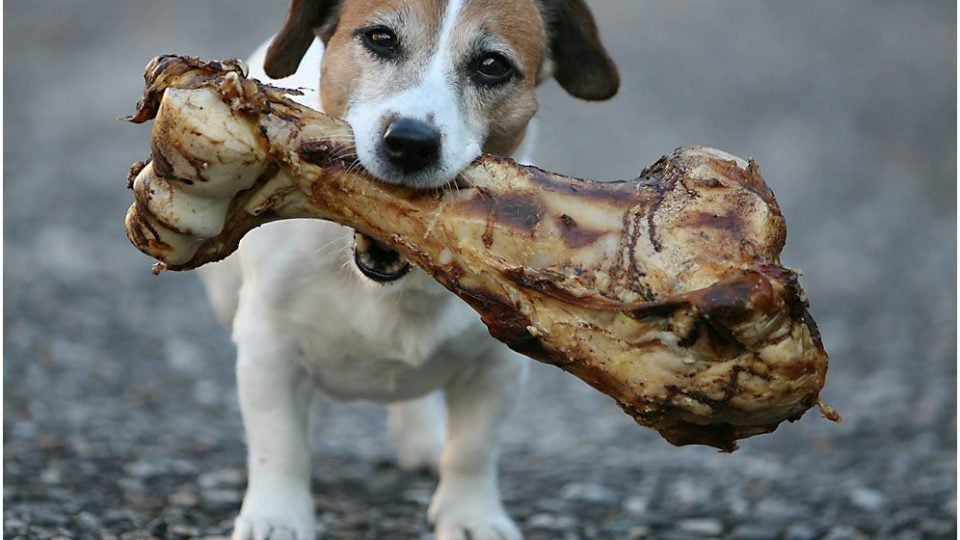 Fossil vertebrates are mostly known from hard tissues - bone and teeth. Bone is composed of:

This material is secreted and maintained by living cells:

Acellular (left) and cellular (right) bone from Dean and Shahar, 2012
Bony tissue can be:


What is its history?

The earliest known phosphatic hard tissues were acellular, and were tooth-like in being made of:

Among living craniates, bone in any form only occurs among members of Vertebrata - craniates with vertebral elements protecting their spinal cords. What does the study of fossil organisms tell us about the distribution of bony tissue?

As we do this survey, be aware of these issues:

The earliest vertebrate hard tissues are small acellular elements: conodont elements, which show outer layers of enamel covering layers of dentin. Conodonts were not the only representation of craniate hard tissues in the Cambrian, however. Enigmatic, scale-like plates of bony armor called Anatolepis were also present. In this and similar creatures, histologically tooth-like denticles complete with enamel and dentin formed a composite superficial body armor.

Indeed, in many early vertebrates, there seems to have been little difference between teeth and scales, which took the form of little denticles with a pulp cavity, dentin, and enamel.

The most basal vertebrates, however, lacked any hard tissues (except for conodont elements.) A survey of early vertebrate evolution should focus on their acquisition:


These form a clade in analysis of Miyashita et al., 2019. Illuminated by well-preserved Jamoytius and Euphanerops. These were cylindrical, vaguely lamprey-like creatures with varying amounts of acellular dermal bone plates, but without specialize mouthparts. They lack obvious adaptations to suspension feeding or to taking large prey. Deposit feeders? Many morphological details reinforce the photo-lamprey impression:

But other characters reminiscent of gnathostomes or possibly the ancestral vertebrate condition:

According to the parsimony analysis of Miyashita et al., 2019, these are stem cyclostomes. Their Bayesian analysis placed them as stem hagfish. Either result is plausible.

Nevertheless, there is a cottage industry in identifying potential synapomorphies between sub-taxa within Thelodonti and other vertebrate groups. These will be noted below.

Teeth without jaws? In several thelodonts, internal and external odontodes are clearly preserved inside the mouth and pharynx as well as in the skin. Rücklin et al., 2011 describe the odontodes of Loganellia scotica in detail. At present, these "internal" odontodes are the earliest plausible manifestations of teeth, although debate rages about:

Stay tuned. We will note additional landmarks in the appearance of proper teeth in later lectures. 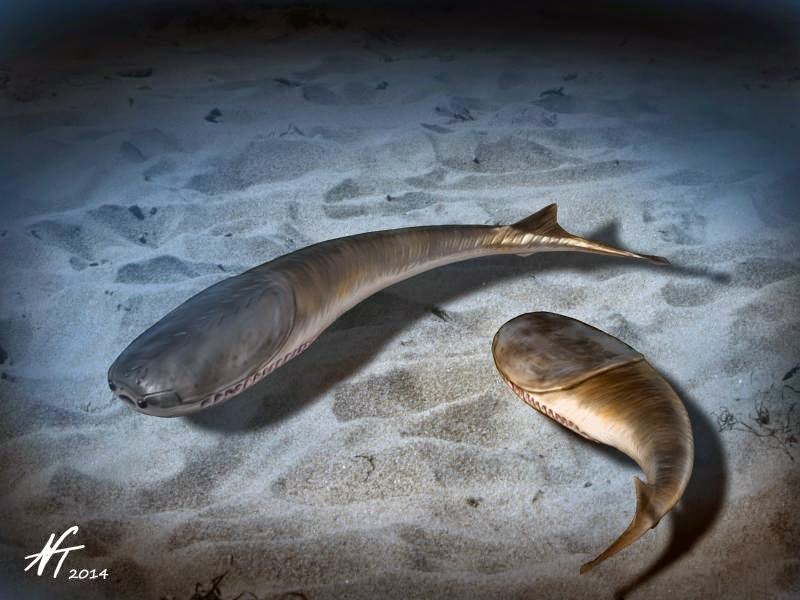 The earliest well-preserved vertebrate, the Ordovician form Sacabambaspis, ironically represents a more derived form of hard tissue, in which individual denticles are integrated into broad head-shield composite elements and joined to one another through dermal layers of aspidin, a composite of thelodont-like denticles, dentin, and acellular bone. These shields are the first vertebrate elements that are bone-like in outward structure. Their possible functions include:

Note: It was not an internal skeleton.

Astraspis desiderata Athena Review
By the Silurian, many Sacabambaspis - like creatures are known, E.G. Astraspis (right).

Drepanaspis gemuendenensis Palaeos
Without a living analog, speculations about the ecology of these creatures is very limited. We note the following:

Remember the rod-and-pulley oral mechanism found in hagfish and lampreys, and inferred in euconodonts? Although the internal feeding apparatus of Jamoytius, Euphanerops, anaspids, thelodonts, and pteraspidomorphs is poorly know, so far, we have not surveyed any animal that could not possibly have had such a feeding mechanism: We now move on to creatures whose feeding apparatus definitely indicates different feeding strategies.

Before proceeding, a note: The cells that secrete and maintain hard tissue may be locked within it, yielding cellular bone. Seen in larger bony elements. Cellular bone forms in two ways: