Neopterygii - Half of vertebrate diversity in one hour

This remaining actinopterygians belong to Neopterygii and comprise roughly half of vertebrate diversity. Living neopterygians include:

This huge radiation seems to have resulted from signifcant morphological adaptations beginning with:

Dipteronotus gibbous
The starting point: Dipteronotus, a stem neopterygian, gives an idea of the plesiomorphic condition for these animals: From this condition, remarkable transformations unfold. Some are autapomorphic or convergent on crown teleosts (E.G. pectoral fin mediated gliding by the basal neopterygian Potanichthys xingyiensis (Xu et al., 2012.)

Schematic of Cheirolepis, a non-neopterygian and Amia, a neopterygian
The mouth: In non-neopterygians, the geometry of jaw adductor muscles is similar to that in other eugnathostomes: they originate on the lateral surface of the palatoquadrate and insert on the jaw, and occupy an adductor chamber that is confined by the palatoquadrate medially and dermal skull roof bones laterally. Among neopterygians this chamber: This was accompanied by a reorientation of the lever system closing the jaw:

Parasemionotus
Whenever the mouth opens, the oral cavity expands and water flows in. Ancestrally osteichthyans did little to capitalize on this. With increasing ability to expand the oral cavity laterally, however, a cascade of adaptations to suction feeding occurred:

Parasemionotidae indet.
In the postcranium:

Lepisosteus
Lepistosteid skulls are a fun combination of autapomorphic and plesiomorphic. On the plesiomorphic side: On the apomorphic side: In the post-cranium, we see: Morphologically, lepistosteids occupy the end of a long branch encompassing much unique evolutionary change. To break up that branch, we look at fossil ginglymodans. 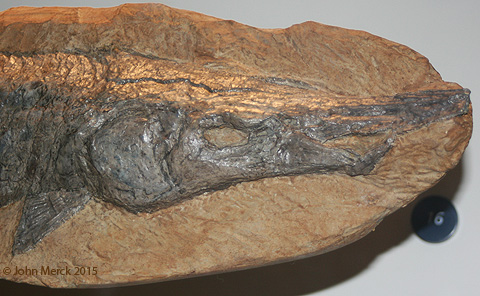 Isanichthys palustris from Cavin and Suteethorn, 2005
Semionotiformes (Middle Triassic - Middle Cretaceous) A very speciose Mesozoic radiation whose members share with lepistosteids: In their skulls, however, neopterygian characters are clearly visible, including:

Semionotiformes are interesting in their own right, as one of the best documented fossil examples of species flocks - radiations of closely related species occupying adjacent ecological niches in the same general environment, and distinguishable by body shape, color, and scale pattern. A modern example is that of African rift valley lake cichlids. During the Late Triassic, similar flocks of semionotiformes occupied similar environments - the rift valley lakes of the Newark Supergroup.

(Triassic - Quaternary) Living Amia calva and fossil Amiiformes, (Jurassic - Quaternary) and their other fossil relatives. Freshwater ambush predators. In them, the rest of the body begins to catch up, evolutionarily, with the head:

Watsonulus with jaw and cheek bones removed
But the mouth is not static. As emphasis increases on suction-feeding, the role of the hyomandibula in the lateral expansion of the palatoquadrate increases. In halecomorphs and Teleosts, we see the symplectic, a new ossification directly linking the hyomandibula to the quadrate, the ossification of the palatoquadrate forming the jaw joint. Together, the hyomandibula, symplectic, and quadrate form the suspensorium - the primary load-bearing attachment of the jaws to the neurocranium.

Amiiformes (Jurassic - Quaternary) Members of Amiiformes extend back to the Jurassic and include both fresh water ambush predators similar to the living Amia calva, marine pursuit predators such as Ionoscopus (Late Jurassic - right). Note that Amia's long dorsal fin is derived within the group.

Alas, there is no consensus on the phylogenetic pattern formed by Ginglymodi, Halecomorphi, and Teleostei (the derived actinopterygians). Two hypotheses compete:

Proscinetes sp., a pycnodontiform
A victim of the headache: Pycnodontiformes (Triassic - Paleogene) Distinguished by: By analogy with living forms, probably reef fish feeding on hard-shelled organisms. Maximum diversity in the Cretaceous, but they straggled well into the Eocene Epoch. Cute, but where do they fit on the tree? They present a confusing combination of character states: But... Pycnodont surprise: Traditionally considered close to Teleostei, the only phylogenetic analysis to address their position is that of Poyato-Ariza, 2015. This places Pycnodontiformes, instead, as a basal branch of Neopterygii.

What is Teleostei?: Wait for it.

Teleostei: (Triassic - Quaternary) The vast majority of living actinopterygians belong to this highly derived clade, with significant apomorphies of:

In them, the neopterygian trends toward: reach their greatest expression.

Because teleost evolutionary change is focused in the caudal region, let's establish a basic vocabulary.

Even though in Neopterygii the tail tends to evolve toward an outwardly symmetrical shape, simply by modifying the length of fin rays, the skeleton that supports it is still clearly heterocercal. In the course of teleost evolution, the internal skeleton rushed to catch up.

Pholidophorus bechei
Basal teleost: Pholidophoridae are the basal branch of Teleostei, including small fish like Oreochima and Pholidophorus (right). In them, some changes are evident:

The net effect is:

Aspidorhynchiformes: (Cretaceous - Paleogene) Long - bodied, medium-sized predatory fish with heavy ganoid scales, long pointed snouts, and a unique pattern of ossification of the skull. United with Teleosteomorpha by the possession of distinct uroneurals.

As with aspidorhynchids, the connection between pachycormids and teleosts is found in the tail, where hypurals are not merely specialized but fused into a hypural fan. And yet, these animals show no tendency to ossify their notochords. In fact, these tend to be poorly ossified in comparison to other neopterygians.

Pholidophoridae, (Triassic - Cretaceous), the most basal member of apomorphy-based Teleostei is our model of their basal condition. Pholidophorids were small predatory fish.

Elopocephala: (Jurassic - Quaternary) The crown-group of Teleostei. This is a very speciose group (~28,000 species). Here we must focus only on the basal pattern and largest groups:


Synapomorphies of Elopocephala: Exist but are highly technical and depend largely on reversals. E.G.:

The osteoglossomorph caudal skeleton is plesiomorphic. Note that:

Gaudryella sp.
Euteleostei: (Cretaceous - Quaternary) The last common ancestor of Salmoniformes and more derived teleosts. Potential synapomorphies are beyond our technical scope, but involve reduction of the uroneurals.


Neoteleostei: (Cretaceous - Quaternary) Potential synapomorphies of occur at both ends of the animal:

Spines are an obvious defensive adaptation, that is developed in various ways. In many familiar acanthomorphs, the anterior spiny portion of the dorsal fin is distinct from the remainder, resulting in an anterior spiny dorsal fin and a posterior soft dorsal fin

Caveat: We can't address the fantastic diversity of Acanthomorpha, but in some of them we see the ultimate expression of the actinopterygian trends described earlier, plus some wonderful adaptations. Glancing at a small, arbitrary sample of its diversity, from the molecular phylogeny of Betancur et al., 2013 we note:

This breaks down into two major groups:

Caudal skeleton of Zoqueichthys from Alvarado-Ortega and Than-Marchese, 2012
Generally there is a tendency toward the reduction in the number of fin rays.

Percomorphacean phylogeny after Betancur et al., 2013
Percomorphacean diversity: Where to start? Beyond this point, we enter the realm of dragons and unicorns. Morphological systematics has failed to converge on a clear picture of Percomorph phylogeny, however molecular systematists are beginning to. Currently the last word belongs to Betancur et al., 2013 who have provided both a phylogeny and revised taxonomic nomenclature which we follow here. the major pattern:

Percomorpharian phylogeny after Betancur et al., 2013
Percomorpharia: Peeling away another layer of the endless actinopterygian onion, we reach Percomorpharia. Well known groups and interesting patterns contained within it include:


That a lot of fish.


For all that this is lots of data to process, major patterns in teleost evolution do emerge readily from the background:

The principal radiation of acanthomorphs occurred during the Late Cretaceous.

2. Percomorphaceae is a Cenozoic radiation:

As such it parallels other vertebrate radiations that followed the K-Pg extinction, including

3. Major radiations start in the oceans:

With few exceptions (Anabantomorphariae) major actinopterygian radiations occur in the oceans and invade fresh water subsequently. As a consequence, fresh waters serve as a refuge for groups that have been replaced in the oceans. Examples include:

It is tempting to regard: As representing stages in that transition. 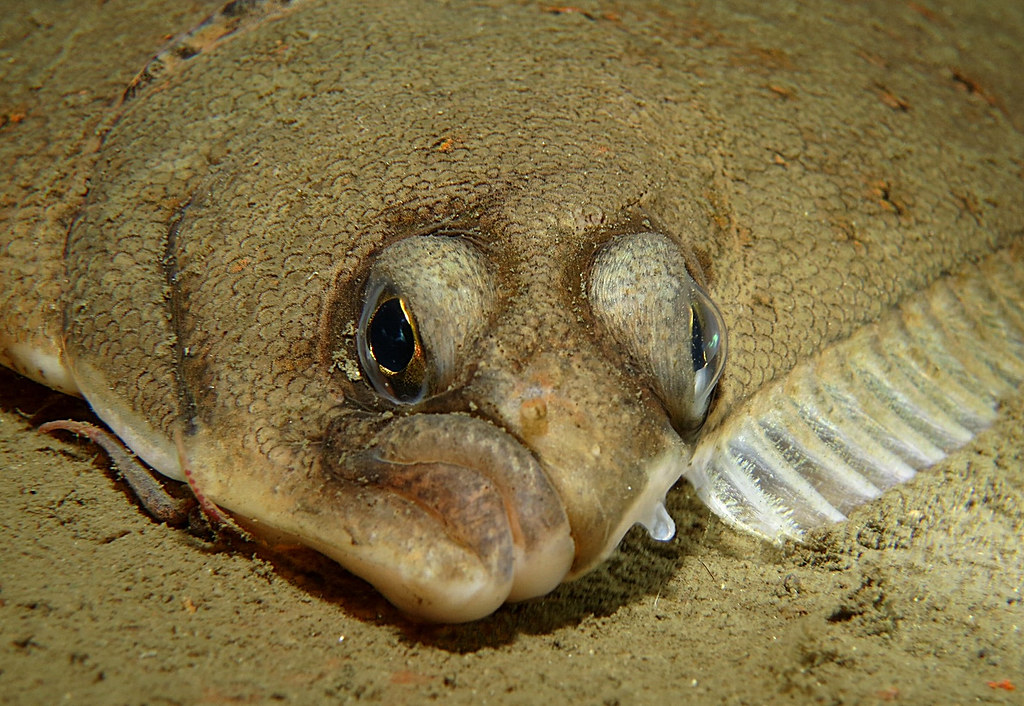 Teleost evolution shows the iterative invasion of the same ecological niches by diverse lineages. Example: Carangimorphariae - transforming something like the green jack(above), a fast predator with a strongly laterally compressed body, into a flattened bottom dweller like a flounder. One option is simply to flop onto one side, but that places one eye is in the mud.

Apparently it is easier for evolution to move one eye to the opposite side of the head than to radically change the shape of the body. This transition is documented by the Paleogene fossils Amphistium and Heteronectes (Friedman, 2008), in which the orbits have become asymmetric but orbital migration is incomplete.

The evolution of the physoclistous swim-bladder allowed the osteichthyan conquest of the deep oceans, but at a cost:

The "lung" could no longer be used for breathing.

Fish that find themselves in need of accessory breathing apparatuses have to improvise evolutionarily. Some strategies: 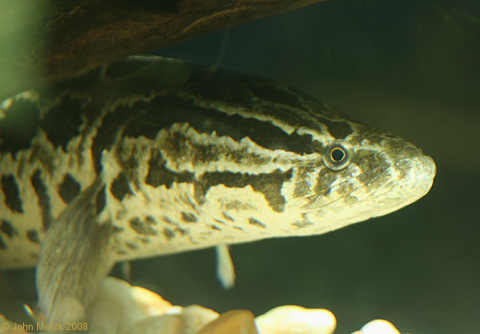