The Devonian extinction seems to have wiped out the water-breathing digit-bearing vertebrates like Acanthostega and Ichthyostega, however many basal stegocephalians held on in the Early Carboniferous. Among them was the (unknown) last common ancestor of all living land vertebrates - the ancestor of crown-group Tetrapoda. Their common ancestry is concealed within Romer's Gap. Their descendants (along with some "stem tetrapod" lineages emerge from it well-differentiated.)

Tetrapoda: Opinions vary as to where this name should be stuck to the tree:

For our purposes, the crown-group definition applies. Greererpeton burkemorani
Noteworthy plesiomorphies - Evolving sensory modalities: Mentioned previously, all of the special senses needed to be adjusted for life on land. For most, these changes left no fossil record (vision, olfaction). In two, however, there are clear osteological correlates. :

As we will see, the impedance-matching ear evolved slowly and independently several times in different lineages.

Temnospondyli: (Carboniferous - Cretaceous/Quaternary (?)) The name originally coined for basal tetrapods with rhachitomous vertebrae, but has become one of the better-supported monophyletic groups. Fabulously diverse and speciose. Small to large and aquatic to mostly terrestrial. Temnospondyls were a primary component of the late Carboniferous and Permian land biota, and experienced a Triassic radiation of aquatic forms. Morphologically they varied from unspecialized to rather stout, short-tailed forms. Very few evolved the eel-like shape so common in embolomeres.


Temnospondyl Diversity: The problems and competing hypotheses of temnospondyl phylogeny are beyond our scope. What follows is a review of the major groups recovered by Schoch, 2013. Dvinosaurus primus by D. Bogdanov from Wikipedia
Dvinosauria: (Late Carboniferous - Early Triassic) First representatives of a recurring theme in temnospondyl evolution - paedomorphic adults that retain larval characteristics including gills as an adult. Speciose and common during the Permian.

Cacops - a dissorophid - from Wikipedia
Dissorophoidea: (Late Carboniferous - Quaternary) A diverse group of small temnospondyls including: 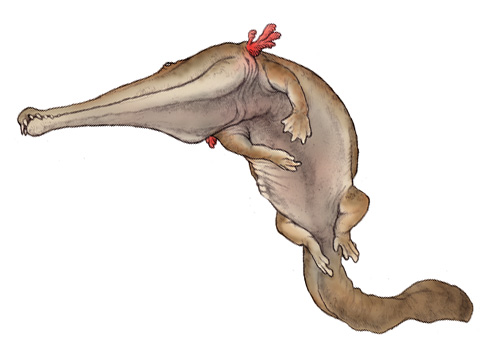 The archegosaur Prionosuchus from Dinopedia
Breathing in Amphibia: Witzmann, 2015 notes two key facts: It follows that ancient amphibians who retained their scales (especially big ones) should also retain their gills as a means to eliminate CO2. In fact, his survey of the branchial skeletons of early tetrapods indicates that among temnospondyls, only: Appear completely to have lost their gills as adults.

Hypotheses of phylogeny place them all over the tree, from a position outside crown group Tetrapoda to one close to Amniota. All authors agree that they are not on the Amphibia branch. And yet, they present striking plesiomorphies:

Diplocaulus magnicornis from Carroll 2009
Nectridia includes Diplocaulidae (E.G. Diplocaulus magnicornis (right and link to full skeleton). Characterized by: Note: resting trace fossils left by these animals indicate that the "horns" were connected to the body by a fold of flesh. Sorry to generations of illustrators who have reconstructed this animal like this. In reality, it's probably more like this.

Lepospondyl problems: But there is growing suspicion that Lepospondyli, as traditionally understood, may not be monophyletic. Consider:

Before proceeding toward Amniota, we pause to tie up a loose end:

Traditionally regarded as monophyletic, Lissamphibia contains all three groups of living amphibians and one fossil group: (Early Triassic - Quaternary) Frogs are very highly derived for specialized forms of locomotion, hearing, and prey-capture. Although most hang out near water, only a few actually feed in the water, and their adaptations are not as useful there. Among their idiosyncrasies:

Triadobatrachus massinoti from Carroll 2009.
Most fossil frogs share these features (although some have more dorsal vertebrae). Our earliest glimpse is from Triadobatrachus from the Early Triassic. Although plesiomorphic in many ways, and probably unable to jump, it shows the initial stages of many froggie adaptations of the cranium and postcranium.

(Late Triassic - Quaternary) Salamanders. Generally less specialized than other lissamphibians and frequently adapted for life in the water. Although their water-breathing larvae are less specialized, we often see paedomorphic, permanently aquatic salamanders, and many of their anatomical specializations seem like adaptations to aquatic life. As in frogs, scales are completely lost, facilitating cutaneous breathing.

(Late Triassic - Quaternary) Caecilians. As weirdly derived as frogs but in the opposite direction - as limbless burrowers (although some are secondarily aquatic.) Caecilians retain small scales and do not breathe cutaneously.

Eocaecilia micropodia from Carroll 2009
Eocaecilia: (Early Jurassic) Only one fossil caecilian suggests their ancestral form. Noteworthy for the retention of limbs, however many derived caecilian adaptations are clearly visible. Its skull is plesiomorphic in the retention of postparietals, jugals, and (maybe) tabulars.

(Jurassic - Neogene) A minor group of extinct lissamphibians. Distinguished by features of cranial osteology, including non-pedicellate three-cusped teeth. Resembling scaly salamanders. For us, their important role is to remind us that the loss of scales in Amphibia only occurred inside Lissamphibia. Thus, we should not assume, as many artists do, that ancient amphibians had naked skin like that of frogs and salamanders.

Up close, the skull of an albanerpetontid looks like a salamander attempting to become a caecilian. The neurocranium is strengthened by the fusion of prootics, opisthotics, and exoccipitals into an otic bone, however the caudate cheek-gap and hinged squamosal are still evident. Ruta and Coates, 2007, find albanerpetontods to be stem-gymnophionans. One clear synapomorphy of albanerpetontids:

Yaksha perettii from Science News
Daza et al., 2020 illuminated albanerpetontid ecology with their description of Yaksha perettii, a mid-Cretaceous member preserved in amber. Yaksha sports an elongate entoglossal process of the hyoid arch analogous to those of chameleons, suggesting that like them, it was a "ballistic" ambush predator that captured its prey by projecting its tongue. Was it just Yaksha, or is this a general feature of Albanerpetontids?

What we definitely know:

Potential synapomorphies of Lissamphibia, if monophyletic:

Hypothesis II: Monophyletic Lissamphibia as members of Dissorophoidea: Beginning with the first application of cladistic methods (EG Milner, 1988), Lissamphibia has been found monophyletic and nested within Temnospondyli. Ruta and Coates, 2007 have recently confirmed this result, with Lissamphibia nesting inside amphibamid dissorophoids.

Hypothesis III: Polyphyletic Lissamphibia with Batrachia as member of Dissorophoidea and Gymnophiona nested within "microsaurs.": Other recent, credible phylogenetic results (E.G. Anderson 2007) recover a pattern in which:

In 2019, preliminary information has been presented on a yet more basal stem gymnophionan from the Early Triassic. We wait and hope, however this door # 4 - Frogs and salamanders as dissorophoids and caecilians as stereospondyls, seems to have the momentum. Stay tuned.