Gephyrosaurus bridensis from Conrad, 2008.
(Triassic - Quaternary) The single genus Sphenodon, the New Zealand tuatara is the sad remnant of a large group of lepidosaurs that was abundant and speciose during the Triassic and Jurassic. Ancestrally they were terrestrial, and basal forms like Gephyrosaurus (Early Jurassic Evans, 1980) were barely distinct from stem lepidosauromorphs and stem squamates, and yet it is distinct in having: Among later rhynchocephalians, we see trends toward:

Lizards and snakes. (Triassic - Rec.) Thousands of species. Many interesting adaptations. There is no way to cover exhaustively if we had an entire semester.

Sphenodon punctatus a rhynchocephalian compared to Tupinambis teguixin, a squamate.


The synapomorphies of Squamata are legion. We focus on a conspicuous subset:

Sphenodon punctatus a rhynchocephalian compared to Tupinambis teguixin, a squamate.

This is a bewildering list, however some major adaptations shine though:

Huehuecuetzpalli mixtecus from Reynoso 1998 - ~3 cm.
This huge list of synapomorphies suggests a very long squamate stem, however we have only three well-known stem squamates, one each for the Triassic, Jurassic, and Cretaceous:

Diversity: Since the early days of cladistics, a short list of major monophyletic groups appears has typically appeared: Morphology-based analyses have, since the early days of cladistics, recovered the pattern at right where Squamata is divided into two large groups:

Scleroglossans show a tendency toward the reduction of the limbs and contain several limbless groups.

This consensus evaporates when we look at some more specialized groups, beginning with minor groups: 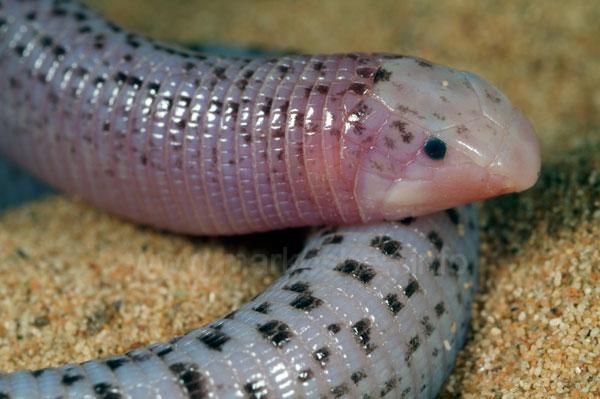 Plotosaurus bennisoni
Mosasaurs, a particularly spectacular scleroglossan group, appeared and thrived in the second half of Cretaceous, but were extinguished by K-T extinction. During that interval, they ranked among the oceans' dominant predators. Mosasaurus was the first fossil reptile to be studied scientifically by Georges Cuvier, who identified it as a lizard.

A look at the quadrate of Tylosaurus (right) clearly shows the apomorphic squamate quadrate. Other interesting mosasaurian features include:

Despite this long history of study, mosasaurs continue to surprise us.

Relationships: All agree that mosasaurs are monophyletic and derived from "Aigialosaurs," a paraphyletic group of semi-aquatic medium-sized scleroglossans. Their close relatives are Dolichosauridae, containing medium-sized marine scleroglossans with long necks. (Late Jurassic - Rec.) The most subtle of beasts.

Rather than giving a synapomorphy list, we will note major evolutionary trends:

The comparison of the skulls of the Nile monitor lizard and reticulated python (a snake showing a relatively ancestral serpentine morphotype) underscore these differences. What kind of animal was the first snake?

Two hypotheses have been proposed, both of which address snakes odd sensory systems: Systematists are drawn into this debate because the discovery that the sister taxon of Serpentes was either aquatic or fossorial would lend weigh heavily in larger disputes (wait for it).

Basal snakes: Proponents of the fossorial hypothesis derive comfort from the cladogram of living snakes.

Note: both of these groups are ancestral enough that they lack the broad belly scales that we typically associate with snakes.

Amphisbaenians and skinks, also with fossorial adaptations, have both been proposed as sister taxa of snakes. Pythonomorpha hypothesis: But since the 19th century mosasaurs, and their close relatives the dolichosaurs, have been proposed as sister taxa of snakes based on the morphology of their palate and jaws. Similarities include: A sister taxon relationship between snakes and mosasaurs was first hypothesized by Cope, 1869, who coined the group name Pythonomorpha, and proposed that they belonged to Anguimorpha. Pachyrachus problematicus
Renewed debate: In the 1990s, gasoline was thrown onto the issue of snake origins and relationships by a volley of descriptions or redescriptions of primitive snakes from the Cretaceous, including Pachyrachus problematicus (Lee and Caldwell, 1997), Haasiophis terrasanctus, and Eupodophis descouensis. Stimulating because: At first glance, a snake with legs ought to be a basal primitive snake, and a marine basal primitive snake ought to cinch the marine ecology of the ancestral snake, and support the pythonomorph hypothesis. But not so fast.

Their skulls proved to have the derived characters of macrostomatan snakes. Thus, despite the presence of legs, most cladistic analyses continue to place them well within the crown of living snakes. Apparently the presence of legs in them is a reversal. Strange! Of course, if they are derived snakes then they do not represent the ancestral condition.

More recently, Caldwell et al., 2015 have revealed leggy snakes from the Late Jurassic. These, in contrast, to Pachyrhachis, occupy a basal position in Serpentes.

The fact that for over a year, the four-legged Early Cretaceous Tetrapodophis amplectus was regarded as a basal snake (Martill et al., 2015) only later to be identified as a dolichosaur (Caldwell et al., 2016) emphasizes the strong similarities between snakes, dolichosaurs, and mosasaurs.

The debate on the phylogenetic position of snakes has fed a larger controversy that deflates our confidence about squamate phylogeny:

Gauthier et al., 2012, attacked these an many other issues at once with an authoritative comprehensive phylogenetic analysis that assembled a large data set with substantial new character information. Their result included two surprising elements:

The fossorial hypothesis seems to have won the day, and yet as recently as Palci et al., 2013, publications in support of the marine hypothesis and mosasaurian relationship have continued to appear.

Why hasn't this issue gone away? Ongoing disagreement about the actual identity of skeletal elements of the animals involved including:

The Toxicofera Hypothesis: When molecular methods are applied, things get very interesting. Wiens et al., 2012 obtained a result in which Scleroglossa does not appear. Instead: Reeder et al., 2015 have confirmed this result with an analysis that: The result confirms Toxicofera and places Mosasauroidea as the sister taxon of Serpentes. Moreover, morphological synapomorphies are identified for Toxicofera.

Before we dismiss this radical idea, the Toxicofera hypothesis cleans up a loose end: Fossil iguanians don't appear stratigraphically until well after members of other major squamate groups, despite their basal position in morphological phylogenies. Placing them in the crown of the tree puts them in a stratigraphically congruent position.