Euryapsida and kin - the reptilian invasion of the seas

First complete Plesiosaurus recovered by the Annings, 1829
from Wikipedia
Eventually we will move to the Archosauromorph side of the reptilian tree, but first, a problem.....

We risk neglecting a reptilian radiation that was both:

The marine reptiles of the Mesozoic, including: These are a problem because although they are well-studied and known, their derived condition makes them very difficult to place on the amniote tree.

First, we describe the well-known groups whom everyone agrees to be monophyletic:

Eosauropterygia: (Early Triassic - terminal Cretaceous) Plesiosaurs, nothosaurs, and relatives. These encompass an outstanding size range from the 20 cm. Triassic pachypleurosaurs to plesiosaurs the size of sperm-whales. Their general characteristics:

Beneath the skin, these creatures are characterized by: Eosauropterygian diversity:

Could they walk on land? Probably. In many we see sexual dimorphism in which one gender has robust forelimbs and other has slender ones. Could this distinguish females coming ashore to lay eggs? Maybe, however close relatives practice ovovivipary - retaining eggs until hatching then "giving live birth". This is done by some squamates and we have fossils of small nothosaurs with large embryos (Cheng et al, 2004).

The nothosaur Ceresiosaurus by D. Bogdanov from Wikipedia
Nothosauria: (Middle - Late Triassic) Small to large predators, inhabiting near-shore waters and shorelines. Their skulls display adaptations to the capture of large prey, captured by movement of the entire head on the end of the neck (head hunter). As in other predators of this sort:

Pistosauroids, including the classic plesiosaurs were the only Eosauropterygians to invade the open ocean, but they did it in stages: Earliest known members of the plesiosaur lineage were nothosaur-like in general form, but by the Late Triassic, forms like Pistosaurus were finally invading the open oceans.

Osteological trends: Among pistosauroids, we see:

Synopsis of Benson et al. 2012 hypothesis
Plesiosauria: (Latest Triassic - terminal Cretaceous) The classic eosauropterygians of the mid Mesozoic. These experienced their primary radiation at the beginning of the Jurassic, and represent the second amniote radiation of the open oceans. Characterized by: Thus, fully dependent on flippers for locomotion. Rhomaleosaurus cramptoni by D. Bogdanov from Wikipedia
The popular image of plesiosaurs is of the derived long-necked, small-headed forms, however the ancestral state of body proportions is more like in the stem pistosauroid Pistosaurus, with a moderately long head on a moderately long neck (E.G. Rhomaleosaurus - right). From this beginning, plesiosaurs diversified into forms that were:

Neoplesiosauria: (Jurassic - Cretaceous) All other plesiosaurs, including Pliosauridae and Plesiosauroidea. These encompass short-necked and long-necked forms respectively:

Pliosauridae: (Jurassic - Cretaceous) Short-necked forms with large heads, including the largest plesiosaurs, with skulls up to 3 m. (E.G. Pliosaurus kevani). Note, though, that the earliest known plesiosaur - Rhaeticosaurus martens from the Late Triassic:

Plesiosaurus dolichodirus from Palaeos
Plesiosauroidea: (Jurassic - Cretaceous) Long-necked forms with small heads. Among them, Plesiosaurus itself is relatively primitive. Osteological trends include:

Plesiosauroid include superlatives such as:

Plesiosaur Ecology: Long-necked plesiosauroids seem to have exploited a hybrid predation strategy combining elements of pursuit and ambush predation, however there were variations. O'Keefe et al., 2017 describe the elasmosaurid Morturneria saymourensis as a suspension or deposit feeder, on the basis of its dentition.

Criteria of bone histology similar to those applied to terrestrial sauropsids, suggest that plesiosaurs may have had elevated body temperature and metabolic rate:

(Middle - Late Triassic) including Placodus pictured here was restricted to shallow marine environments of the middle and late Triassic. They probably swam clumsily or walked on the bottom in the manner of a snapping turtle. In contrast to their locomotor apparatus, their skulls were intensely modified for withstanding terrific biting forces. The dorsal view at right shows the great size of the muscles mass that closed the jaw. The palatal view shows the transformation of the teeth (marginal and palatal) into a pavement of button-like teeth with which they presumably crushed hard-bodied invertebrates.

Placodus gigas
Placodus is among the more basal (and less weird) placodonts. Distinctive features include:

Placochelys placodonta from Qilong
More derived placodonts form the Cyamodontoidea Many developed extensive dermal armor reminiscent of that of turtles. At least one member, Henodus chelyops has been recovered from lagoonal/estuarine environments. How it fed is enigmatic, but it does not seem to have been crushing hard shelled prey as the others did. Grazing and suspension feeding have been proposed.

Included many ecologically shark or dolphin-like pelagic predators. Initially near-shore creatures, ichthyosaurs were the first marine reptiles to invade the open oceans, doing so during the Late Triassic.

Ichthyosaurs appear in the fossil record highly modified for marine life, with:

Motani 1999 basically wrote the book on ichthyosaur plylogeny (synopsis at right). Ichthyosaurs represent a pectinate tree with early, morphologically primitive members at the base and derived versions at the crown. Some landmarks:

Utatsusaurus hataii from Motani et al. 1998
Utatsusaurus hataii (Early Triassic) Among the first ichthyosaurs and phylogenetically most primitive. Roughly the size of an otter, it nevertheless was unable to come onto land, and shows the general synapomorphies of Ichthyopterygia, including:

Chaohusaurus from Wikipedia
Chaohusaurus: (Early Triassic) reflects the synapomorphies of Eoichthyosauria including: Although as the image indicates, it is noteworthy for giving live birth, according to Motani et al. 2014.

Shonisaurus poplars by Ron Garrett from Oceans of Kansas. The dorsal fin is speculative.
Euichthyosauria: (Late Triassic - beginning of Late Cretaceous). The Late Triassic saw the radiation of ichthyosaurs that were derived in the possession of:

These included the the "shastasaurid" grade some of whose members included the largest marine reptiles on record (See Shonisaurus sikanniensis from Nicholls and Manabe, 2004.) Parvipelvia: (Early Jurassic - beginning of Late Cretaceous). More primitive ichthyosaurs were extinguished by the Triassic/Jurassic extinction event, however ichthyosaurs roared back in the early Jurassic in the form of Parviplevia, the ichthyosaurs with reduced pelves and hindlimbs. This is also the time of the rise of plesiosaurs. Plesiosauria and Parvipelvia have in common their invasion of the open oceans. This is also the interval in which we have soft-tissue impressions that reveal the dorsal and caudal fins of these animals. (Note: a few of these seem completely genuine but many were "improved" by 19th century preparators.) Most preyed on small fish and cephalopods, but some were orca-sized macropredators. 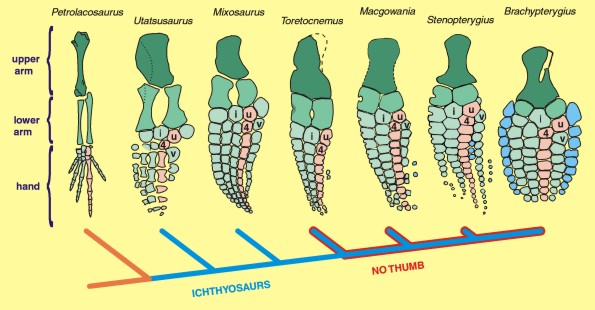 From Ryosuke Motani's Ichthyosaur Page
Limb elements: With eosauropterygians, the homology of limb elements, even in highly derived taxa, is reasonably clear. The only issue is hyperphalangy, the their tendency to add phalanges to each finger. With ichthyosaurs, however, the identity of limb elements is difficult to assess, in part, because of hyperdactyly, their tendency to add extra fingers, as well. No surprise that a volume on homology would use an ichthyosaur paddle in its cover design.

(Middle - Late Triassic) A final group of well-known marine saurians. Thalattosaurs were medium - medium-large animals capable of movement on land or in water. Edennasaurus (right), a more basal form is roughly the size and proportions of the Early Permian Mesosaurus (remember?) Ancestrally, however, thalattosaurs were neither head-hunters nor snout-hunters but a little of each. The thalattosaurian radiation encompassed larger predators like Askeptosaurus and shell-crushing forms like Clarazia

Thalattosaurus alexandrae from Wikipedia
Thalattosaurian synapomrphies: In the last two characters, along with their nearly detached quadrates, they are reminiscent of squamates. Convergence or synapomorphy?


Indeed, what do these animals have to do with one another phylogenetically? Only one answer emerged clearly from the early days of cladistics: (Early Triassic to Late Cretaceous) Storrs, 1991 clearly found Placodontia and Eosauropterygia to be sister taxa. Their synapomorphies include:

Beyond this no clear consensus exists regarding their positions. Some suggestions:

(Middle Triassic) Burst onto the scene as well-described taxa only in the last decade. Characteristics include: The last item, of course, is a potential synapomorphy with Sauropterygia.

(Early Triassic) A small group from the Early Triassic of China, broadly reminiscent of ichthyosaurs in general proportions. The first described was Hupehsuchus, impishly employed by Carroll and Dong 1991 to demonstrate the perils of cladistic analysis. Hupehsuchians are characterized by:

(Early Triassic) Originaly described as a largish pachypleurosaurid, this animal now emerges from phylogenetic analyses as a basal stem eosauropterygian or just outside of Eosauropterygia. It's conspicuous difference from other eosauropterygians is its head, which more closely resembles that of an ichthyosaur or hupehsuchian.

And the latest addition from Motani et al., 2015, Cartorhynchus, a basal ichthyosaur with: Unlike proper ichthyopterygians or hupehsuchians, Cartorhynchus could come out of the water, and was apparently specialized for suction feeding (in manner of snapping turtle).

Synopsis of Motani et al., 2015 with Atopodentatus interpolated.
The real fun: Motani et al., 2015. phylogenetically analyzed representatives of the above taxa to obtain the result at right, finding an aquatic clade containing all of them (Corresponding to the Traditional "Euryapsida." When characters deemed potentially convergent because they related to aquatic specializations were removed, this large clade broke into two distinct clades:

None of this is crazy. It has been noted previously that although they differ in many ways (E.G. in Ichthyopterygia the supratemporals are very large), various of these groups display similarities:

In one sense, this result is fragile and in another it is robust: