Testudo, Malaclemys terrapin, the diamond-back terrapin
We have failed to address one sauropsid group that is dear to our institutional heart. We have saved Testudinata - turtles - for last because they have long represented the greatest challenge of any enigmatic vertebrate to phylogenetic systematics, despite their being very easy to recognize. Stupendemys geographicus, the largest turtle ever

(Permian - Quaternary) The total group containing Testudines and everything closer to them than to Lepidosauria or Archosauria. (Joyce et al., 2021.)

No vertebrate group is more radically transformed than turtles - a situation that has greatly hampered attempts to ascertain their phylogenetic relationships. We have even complained of lacking the Archaeopteryx of turtles, despite, apparently, having at least one under our noses for a century. Here we start with what's definitely known and work outward.

Keratinous (above) and bony (below) elements of the shell from Pough et al., 1990.
The turtle shell - Components: A composite structure in several senses: 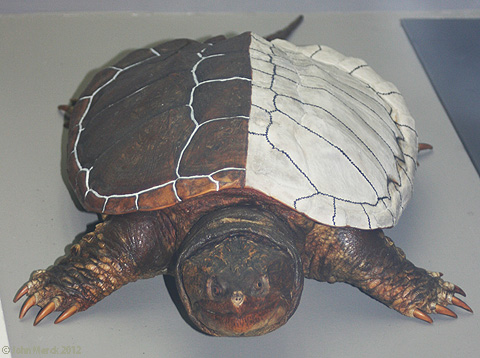 Keratinous (left) and bony (right) elements of the shell in snapping turtle, Chelydra serpentina
Elements in both layers are identifiable and have names. Bony and keratinous elements do not match up one for one. 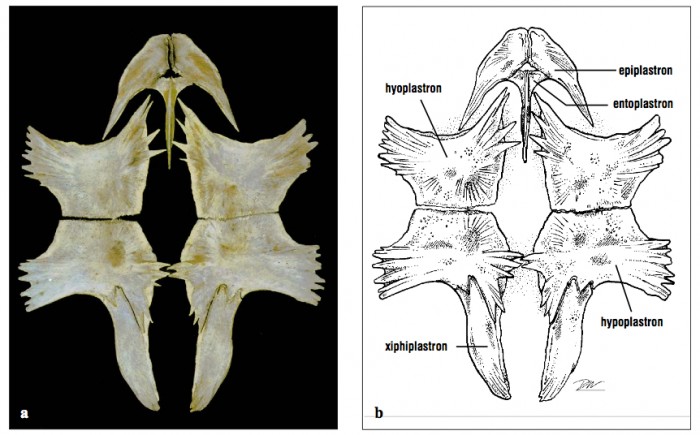 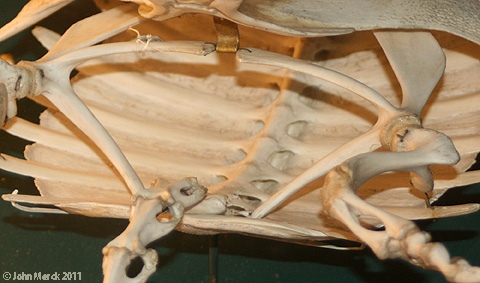 Ventral view of carapace of Apolone spinifera (on its back)
The elements of the carapace appear to be composites of modified endochondral ribs and vertebrae, and dermal bone of some sort. The elements:


How the components of the carapacial elements form and the precise identity of their homologs has been contentious. Major historic hypotheses include:

Recent work by Hirasawa et al., 2013, indicates a more subtle process in the costals: Ribs begin to form endochondrally, but are broadened by perichondral outgrowths. At the same time metaplastic (i.e. ectopic) bone forms in the adjacent dermis and fuses to the rib, yielding the platy costals. Of course, these suture to form a rigid shell. Trachemys scripta, the red-eared slider - disassembled
The turtle shell - Development: In contrast to all other tetrapods:

Ventilating turtle lungs from Pough et al., 1990.
The lungs: Consequences of having a rigid shell that forms in this way:

Pectoral girdles of Captorhinus (left) and Macroclemys - a cryptodire (right)
The girdles: As noted above: this leaves the endochondral elements of the girdles. (Late Jurassic - Quaternary) The crown group of living turtles encompasses two distinct clades: Note: Almost all living turtles retract their heads, but this capacity has evolved independently and happens in different ways. Earlier literature would include creatures from the Late Triassic and Early Jurassic, but recent work including Joyce, 2007 has booted these down onto the stem. 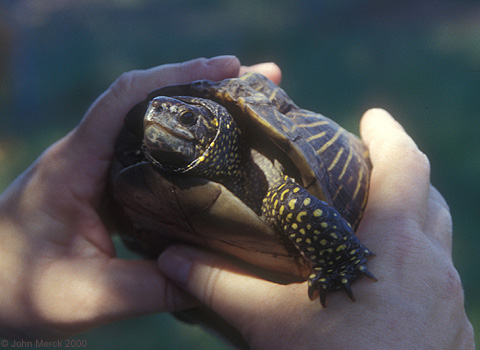 Side-necked turtles retract their heads flexing their necks at the well developed articulations between cervical centra. Restricted to the southern (gondwanan) continents, they are the dominant turtles of Australia. Their synapomorphies include:

The monophyletic group containing all turtles that pull their heads straight into their shells. Synapomorphies include:

Noteworthy plesiomorphy: Otic capsule serves as trochlea for adductor muscles. Among living turtles, this distinguishes cryptodires, but it is also present among stem turtles. The fossil record is full of creatures that are clearly turtles for all intents and purposes but fall outside the Testudines crown. Starting at the crown we move downward. Proganochelys quenstedti
Proganochelys: (Late Triassic) Turtles from farther down the tree are generally similar, with: Of these, the earliest and best documented is Proganochelys (Late Triassic), well known from several specimens. It could not retract its legs, head, or tail into its shell. The neck and tail were studded with free-floating pieces of dermal armor. Nevertheless, it was turtle-like in overall appearance, with a full-blown shell and lacking marginal teeth.

Carpace fragment of Chinlechelys tenertesta from Studium integrale
Chinlechelys: (Late Traissic) Described by Joyce et al., 2008, the Late Triassic Chinlechelys of Arizona resembles Proganochelys except in that perichondral bone of its ribs and vertebrae are so loosely coossified with their dermal component, that their separate identity is clear. When first described, this seemed to resolve a long-standing enigma. In this early testudinatan, the skeletal elements of the shell seem to form by the coossification of the ribs with preexisting dermal plates, but it was not to be.

Testudinata: (Late Triassic - Quaternary) The last common ancestor of all creatures with complete turtle shells, and all of its descendants. Synapomorphies include:

Now it gets interesting. Described by Li et al., 2008, the Late Triassic Odontochelys of China was at the time the most anatomically primitive turtle known. Indeed, it definitely lacks one synapomorphy - the toothless mouth. Odontochelys has typical simple teeth. Stranger yet, although it has a plastron, it lacks a proper carapace.

Odontochelys invokes a new big question: Did the plastron evolve before the carapace, or is Odontochelys secondarily derived in having lost its carapace?

Odontochelys was found in marine deposits of an embayment that was surrounded on three sides by land. Was it aquatic? That was the initial interpretation of Li et al., 2008 however it:

Li et al., 2018 Provide a glimpse of a slightly less derived version from the Early Late Triassic of China. Eorhynchochelys has the broadened ribs and flattened puboischiatic plate of turtles, but lacks any kind of plastron, offering a glimpse of the pantestudine condition just prior to that transformation.

But wait! Eorhynchochelys is derived in one respect: Although it retains maxillary teeth, the premaxillae and anterior dentaries seem to support a rhamphotheca!

For a century, we have lamented not having the Archaeopteryx of turtles despite, evidently actually having it. Eunotosaurus africanus: (Middle Permian) Roughly a foot long, with a small head and roly-poly torso supported by expanded dorsal ribs. Known to science since 1892, this animal has alternately been considered close to and far from turtle ancestry.

Eunotosaurus is our first glimpse of the broadening of ribs. At this evolutionary stage, they offer little actual protection to the animal, but do:

What selective advantage encouraged their evolution? Lyson et al., 2016 argue that they are an adaptation to fossoriality, providing Eunotosaurus, with a solid base for the origin of powerful limb muscles.

One story that emerges from this phylogeny involves the position of the pectoral girdle with respect to the ribs. Ontogenetically, the scapula first forms in the normal position, but is able to slip beneath the carapace because the anterior ribs become angled posteriorly. Phylogenetically we see the same sequence:

The Position of Pantestudines - May, 2015

Follow the bouncing turtles: When we try to say anything about the position of turtles in the tree of amniote evolution, things quickly get weird. Of all recent phylogenetic enigmas, turtles have been the most intractable.

Molecular analyses: For twenty years, relationships of Testudines to other extant groups have been addressed by molecular systematics. At various points they have been recovered as sister taxon to: By far the strongest pattern has been as sister to Archosauria, causing many authorities to accept the relationship. There are zero morphological synapomorphies uniting turtles and archosaurs.

The last decade: Other lines of evidence have been brought to bear on the issue of turtle relationships and the homologies of their skeletal elements.

When we taught GEOL431 in 2015, the accumulating morphological and developmental data seem to support the parareptilian hypothesis of turtle origins. Then came an interesting summer:

Pappochelys rosinae from Carnivora
Pappochelys rosinae (Middle Triassic of Germany) was described by Schoch and Sues, 2015. This small (~30 cm overall length) animal is intermediate between Eunotosaurus and Odontochelys both in time and morphology: They are clearly closely related.

But its remarkable feature is its diapsid skull, that with its ventrally open infratemporal fenestra resembles that of a derived stem saurian. It appears that turtles are, in fact, some kind of diapsid. But what about Eunotosaurus? It has an anapsid skull, right?

Why would Eunotosaurus do this?

And what does this tell us about the importance of fenestration patterns as "key characters" in taxonomy? :-(

So what are they?

Do we just shrug our shoulders and admit that turtles belong in Archosauria? Not yet! Two issues to consider:

That indicates that although they may be diapsids, they are outside of Sauria.