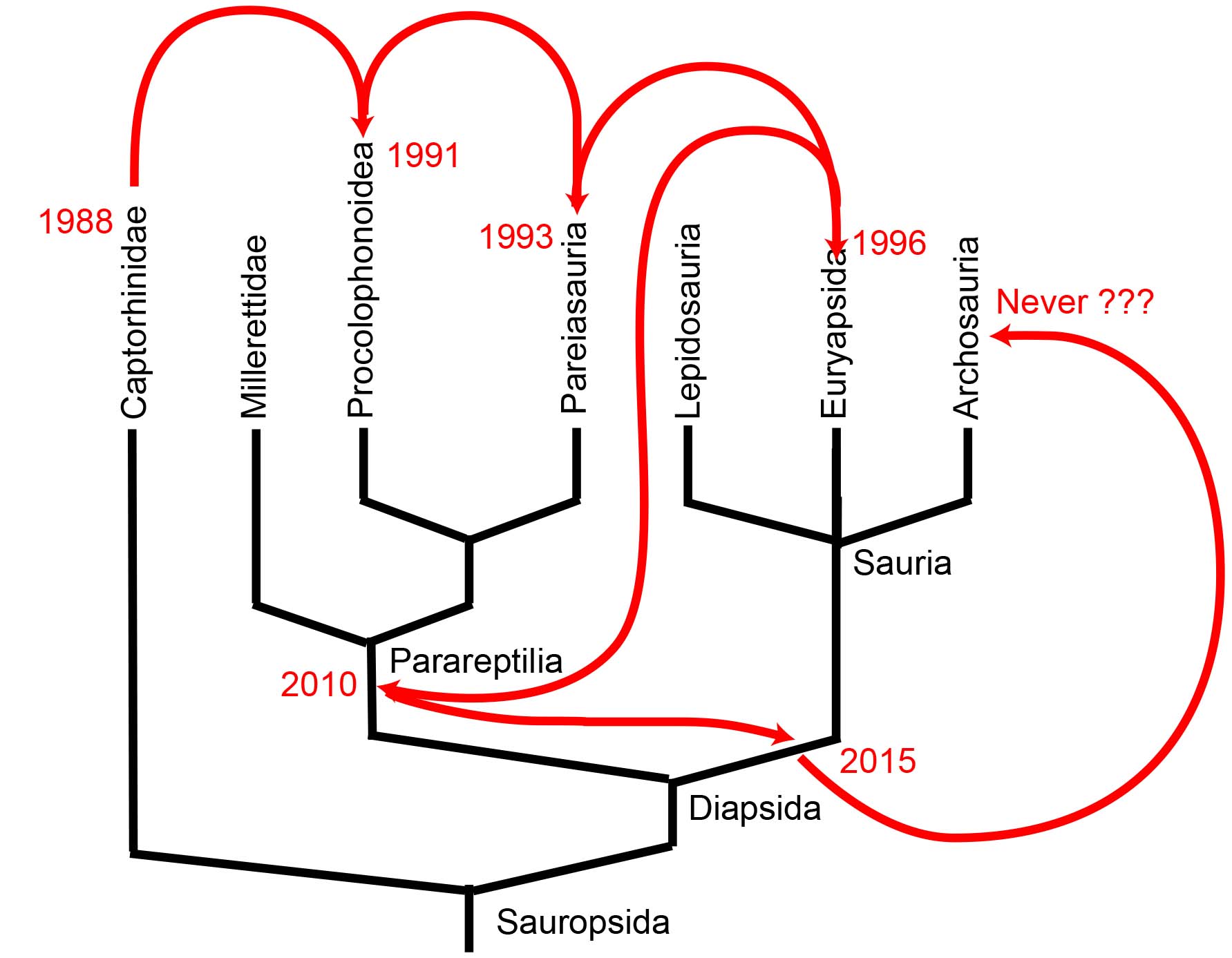 What are turtles, exactly?

Since the dawn of the cladistic age, phylogenetic systematists have grappled with the question of where turtles belong on the amniote tree. The figure at right is a simplified picture of the options that have been mooted. It is hard to identify shared similarity with creatures who are jus so different - a diabolically intractable problem. And yet, the last five years have seen a real breakthrough. As we review the history, we should be mindful of just how difficult it is to zero in on an answer when you lack key information.

(Late Carboniferous - Late Permian) Our starting point, and Turtle aficionado Eugene Gaffney's 1988 choice, for sister taxon of Testudinata. Captorhinids (basal sauropsids) are characterized by adaptations to a strong, slow bite with trends toward rounded crushing teeth in multiple tooth-rows. Including Eocaptorhinus (right) but also larger forms such as Labidosaurikos (~1.5 m).

Gaffney, however, was intrigued by the fact that both they and turtles, in common, lacked several bones of the skull roof typically found in other sauropsids.

Parareptilia: (Permian - Triassic (or possibly Recent)) Up until now, we have omitted this large group of fossil sauropsids, although it contains a number of distinct obscure fossil groups. Our reasons for covering them here will become apparent soon. Most parareptiles retain either the anapsid condition of the skull or the synapsid condition. One pattern they don't show is the diapsid pattern. Most cladistic analyses find them to be basal sauropsids, outside of Diapsid, yet Ford and Benson, 2019 find them to nest within Diapsid, as basal members! At various points, turtles have been proposed to nest within Parareptilia.

The procolophonoid Owenetta from the U. C. Berkeley History of Life.

Just because these animals were conservative in the architecture of their dermal skull roof does not mean that they were boring. They include, for example, an animal argued to be the earliest amniote facultative biped, Eudibamus cursoris (early Permian). There as many interesting groups of parareptiles, but we focus on two: But are they pantestudines? Procolophonoids got the spotlight by Reisz and Laurin 1991, who proposed that they were closely related to Pantestudines.

The pareiasaur Scutosaurus inevitably serving as gorgonopsian-food by D. Bogdanov from Wikipedia
Pareiasauria: (Late Permian). Medium - big, squat, ugly, bumpy. These were major herbivores in the Late Permian world. They competed ecologically with therapsid dicynodonts, and were hunted by therapsid gorgonopsians (right). Thus, everything points to these creatures having been large, slow moving armored herbivores with extensive digestive systems.

But are they pantestudines? Michael Lee, 1993 considered features of their pectoral girdle, and axial skeleton to be strongly suggestive of a connection. Their heavy armor of scutes added color to the argument. Indeed, Lee 1993 considered it likely that that turtles were actually nested within Pareiasauria. 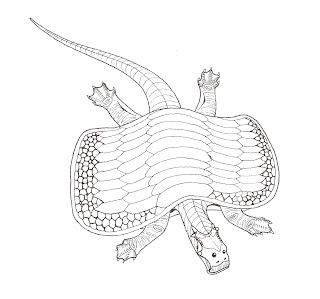 The placodont Henodus chelyops
In 1996, Rieppel and deBraga performed a cladistic analysis that placed turtles inside Lepidoauria, as members of Euryapsida, alongside sauropterygians (including plesiosaurs and placodonts). Interesting result for what it suggests about euryapsids! Traditionally turtle armor is seen as fundamentally different from that of armored placodonts among whom: but Rieppel and deBraga 1996 prompts reconsideration. The turtle as archosaur from The Australian, 8/22/2013
The Archosaur! Beginning in 1997, a host of molecular analyses began to place turtles among archosaurs, some specifying that they are on the Crurotarsan line. For the morphologist, this is frustrating because there are no morphological synapomorphies, but the molecular results are strong. What is up?

All of the foregoing took place in the near absence of informative fossils of anything more basal than Proganochelys. By 2005, three general positions had crystallized:

Why is this so hard?

One issue is long branch attraction, a hazard of phylogenetic systematics.

Imagine a polite tree, in which every monophyletic group is diagnosed by a snapomorphy. Such a phylogeny should be easy to reconstruct using or TnT. The greater the number of characters changing, the easier the reconstruction.

Now imagine a tree with relatively few branches that bifurcate early on then follow independent, non-bifurcating courses of evolution. Imagine a character flipping back and forth between two states. This time, when we attempt to reconstruct the phylogeny, we are in trouble. The character state changes on our long lonely branches do not diagnose new groups. Instead, they simply conceal the lineage's state when it first speciated. When we perform an analyses of these characters, we are analyzing noise more than signal. As a result, we are likely to be positively misled by the analysis because TNT might construe random character changes on these long branches as synapomorphies. This is the long branch attraction problem.

Indeed, there are some hypothetical tree shapes in which the more characters you use, the more likely you are to be misled. This region of "tree-space" called the Felsenstein zone, after its discoverer, Joe Felsenstein.

Conditions where long branch attraction is a danger:

The way out is to break the long branches up using fossils.


Then the new fossils appeared

Odontochelys invoked a new big question: Did the plastron evolve before the carapace, or is Odontochelys secondarily derived in having lost its carapace? Some living highly aquatic turtles have reduced their carapaces significantly. But remember that in living turtles, the carapace and plastron form through different developmental pathways! Does ontogeny recapitulate phylogeny? Perhaps the carapace was in Odontochelys' evolutionary future.

Eunotosaurus africanus from SciNews
2010 - Eunotosaurus: (Permian) Roughly a foot long, with a small head and roly-poly torso supported by expanded dorsal ribs. Known to science since 1892, this animal has alternately been considered close to and far from turtle ancestry. The odd features of Eunotosaurus have been proposed to be adaptations to fossoriality (burrowing). Not crazy.


It was not studied cladistically until the 21st century when Lyson et al., 2010 re-ran the Rieppel and deBraga 1996 matrix adding Eunotosaurus and Proganochelys. The result: Testudata popped out of Diapsida. 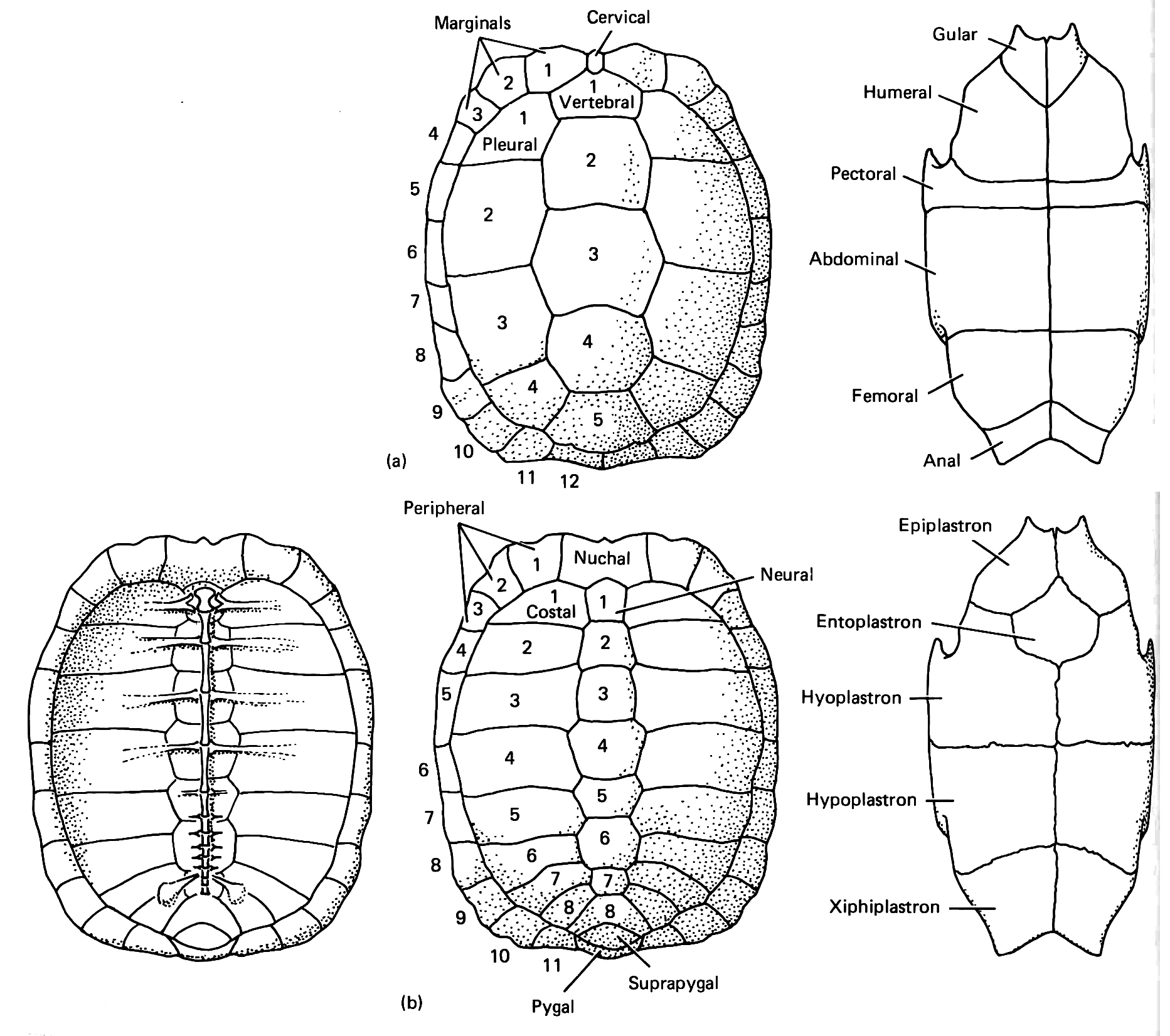 Developmental studies: Since 2009, other developmental evidence has been brought to bear on turtle relationships and the homologies of their skeletal elements. As of December, 2014, accumulating morphological and developmental data seemed to support the parareptilian hypothesis of turtle origins (right). This animation captures the 2014 consensus about the evolution of the turtle shell nicely. Your instructor certainly bought it.

When I taught HONR219D in 2014, the accumulating morphological and developmental data seemed to support the parareptilian hypothesis of turtle origins. Then came an interesting summer:

Pappochelys rosinae from Carnivora
Pappochelys rosinae (Middle Triassic of Germany) was described by Schoch and Sues, 2015. This small (~30 cm overall length) animal is intermediate between Eunotosaurus and Odontochelys both in time and morphology: They are clearly closely related.

But its remarkable feature is its diapsid skull, that with its ventrally open infratemporal fenestra resembles that of a derived stem saurian. It appears that turtles are, in fact, some kind of diapsid.

But what about Eunotosaurus? It has an anapsid skull, right?

Why would Eunotosaurus do this?

And what does this tell us about the importance of fenestration patterns as "key characters" in taxonomy? :-(

So what are they?

OK, I was wrong. Turtles belong in Diapsida. But what about the molecular evidence? Do we just shrug our shoulders and admit that turtles belong in Archosauria? Not yet! The scapula of Pappochelys is informally reported to have:

That indicates that although they are diapsids, they are outside of Sauria.

Of course, no morphological data really refutes the molecular data that suggest that turtles are archosaurs. Indeed, it is difficult to compare these data directly. We await further revelation.