Monsters of Homology II: Archosauria and the folly of counting on fingers

Who are the archosaurs? There are two major node-based groups.

As their names indicate, synapomorphies of these groups have to do with features of their ankles and feet. Interesting because these features predispose members of both groups to evolve toward erect posture. At right: Crurotarsan (left) and avemetatarsalian (right) ankle schematics highlighting two proximal tarsals, the astragalus (A) and calcaneum (C).

In the case of Crurotarsi the calcaneum (heel) takes the form of a lever for the rotation of the foot on the shin. That action works most efficiently when the stance is more nearly erect.

In avemetatarsalians, the ankle joint is linear and there is no calcanea lever.

Crurotarsi took over land ecosystems during the Middle and Late Triassic only to suffer greatly in the Late Triassic extinction event, with only the lineage that gave rise to Crocodylia surviving. 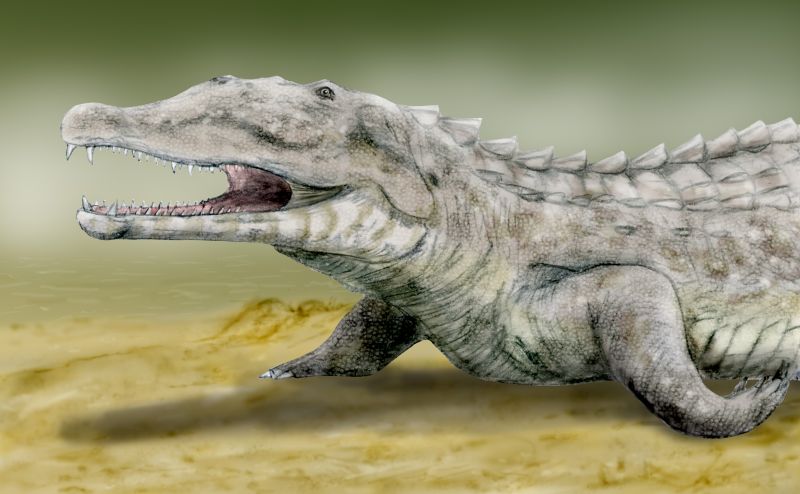 Extinction The terminal Triassic really was the end of an era. For the last 30 million years, rauisuchians, aetosaurs, and various non-archosaurian archosauromorphs had ruled the roost, (accompanied by occasional small mammal-like cynodonts, dinosaurs, pterosaurs, and the first turtles.) Then came a significant extinction event. The precise cause is not known, although the Central Atlantic Magmatic Province (CAMP), a first-class flood basalt associated with the opening of the Atlantic Ocean dates from that time.

From Crurotarsi, only Crocodylomorpha survived:

Avemetatarsalia (Triassic - Recent): Archosaurs more closely related to birds than to crocodilians. The primary avemetatarsalian groups are speciose and enduring, with great significance for the history of science: Outside of these groups, the fossil record of Avemetatarsalia is limited to a small handful of revealing creatures.

Synapomorphy - the naive 20th century view: The ankle joint runs between the proximal and distal tarsals (right). (In contrast to the "crocodile-normal" setup in Crurotarsi (left) in which the calcaneum rotates around a peg in the astragalus.)

Sigh. Life used to be simple, then facts intruded in the form of new animals like Teleocrater. It shares subtle technical characters with more derived members of the bird stem, but it's ankle is crocodile-normal! That, apparently, is the plesiomorphic arrangement for Archosauria. Sceromochlus taylori by T-PEKC from DeviantArt
A handful of small (mockingbird - bluejay sized) basal avemetatarsalians are Late Triassic (but pre-extinction event) age and give a general picture of the ancestral state for members of this group:

Pterosauria: Flying reptiles of the Mesozoic. NOT BIRDS. NOT DINOSAURS.

Both synapomorphies were for support of the wing membrane.

The membrane stretched from tip of finger either to torso or to hind limb. The wing was radically unlike that of either a bat or a bird in terms of skeletal structure.

Histology of wing surface: Unlike the bat wing, which is essentially normal skin, the pterosaur wing is covered with dense parallel fibers (probably collagen). Rather than stretching like the membrane of a bat wing, this surface more likely folded like a collapsable fan. The wing membrane was also invested with this slips of muscle.

Pterosaurs are known from Late Triassic through the end of the Cretaceous and on all continents except Antarctica (they are probably there too). Best finds from are from: 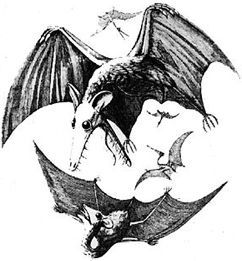 "Note on the Pterodactyle Tribe
Considered as Marsupial Bats" 1843,
by E. Newman from Strange Science
Since there is no living analog to pterosaurs, and since in many cases their anatomy is poorly known, it is difficult to know how they lived. Indeed, mid-twentieth century paleontologist Alfred Romer declared them to be the most enigmatic of fossil vertebrates. Certain issues, however, are coming into focus: 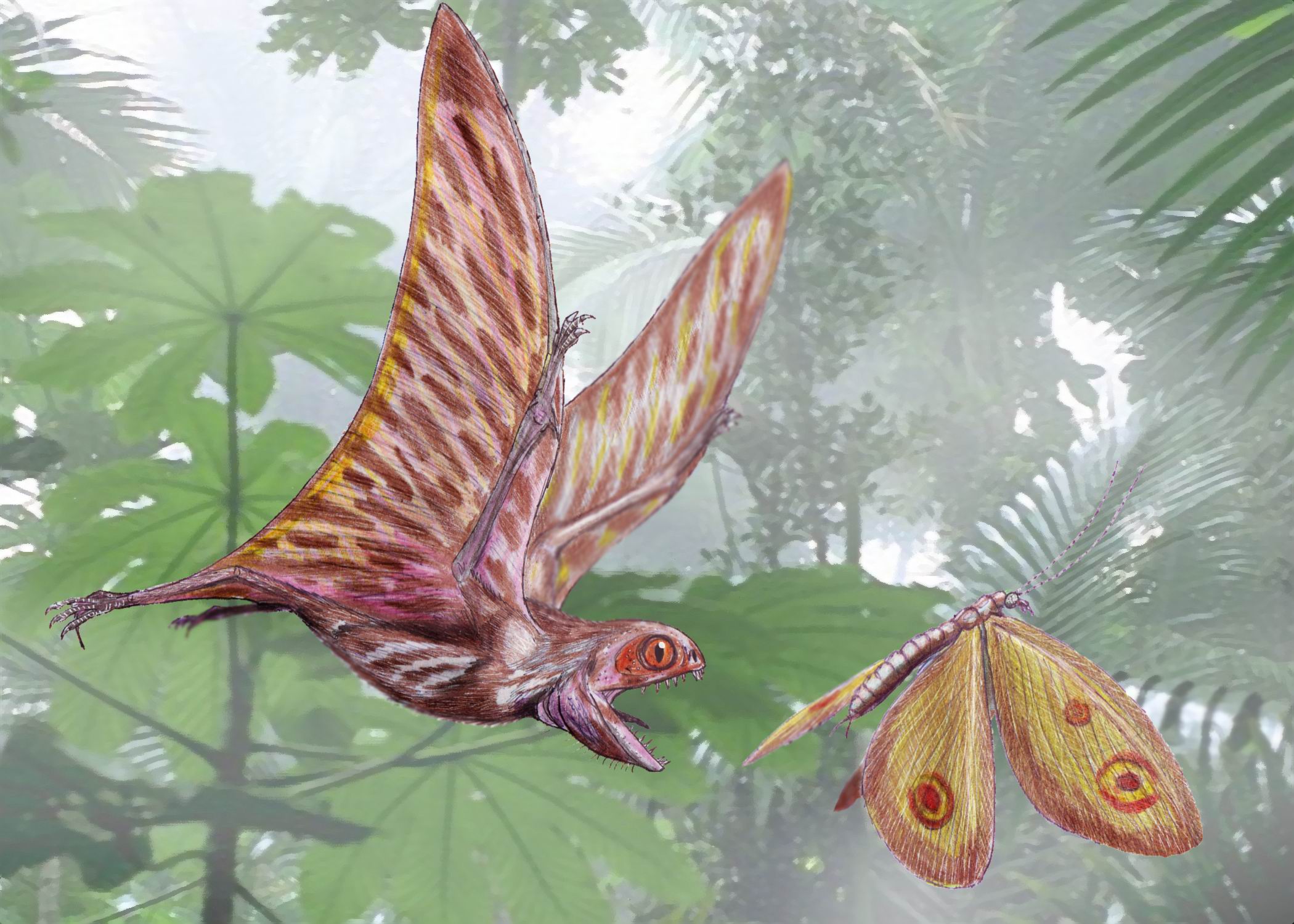 This is not surprising when you consider that most pterosaurs were small animals upon whom the requirements of flight placed high energy demands. Heat loss must have been a danger. This discovery cast doubt on whether pterosaurs were cold-blooded at all.

Evolutionary trends: During pterosaur evolution, various groups have developed many interesting features. In this review, we sample a very primitive and a rather derived pterosaur. Sordes pilosus by D. Bogdanov from Wikipedia
Sordes: (Late Jurasic) represents the primitive condition. Like it, many other basal pterosaurs had Although paraphyletic, it has sometimes been convenient to refer to this grade-group as "rhamphorhynchoids."


Pterodaustro (Cretaceous): Has many characters acquired in the general course of pterosaur evolution that characterized the monophyletic Pterodactyloidea:

Link to a composite comparison of the "rhamphorhynchoid" and pterodactyloid conditions. 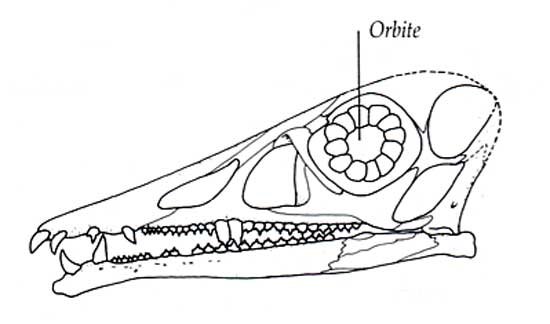 Darwinopterus by from Impact Lab
Throughout the history of pterosaur research, the morphological gulf between rhamphorhynchoid and pterodactyloid pterosaurs seemed unbridgeable. Suddenly in 2009 we learned of a true intermediate: Darwinopterus, a creature with the head and neck of a pterodactyloid and the legs and tail of a rhamphorhynchoid. A good example of mosaic evolution, in which one part of the body evolves faster than others.


Monsters of homology: There is a problem with our understanding of pterosaurs, however. The actual identity of the elements of the hand and wrist are debated. The debate focuses on the question of what happened to digit V?

In any scenario, pterosaurs are missing a manual digit. For a review, see Unwin et al. 1996. This problem foreshadows an even bigger problem with digit homology in dinosaurs.

And now for what you have yearned for...Dinosaurs!

Dinosauria: (Triassic - Recent) The most recent common ancestor of Megalosaurus and Iguanadon, the first known dinosaurs, and all of its descendants. In this course, we will not address dinosaurs in any depth, but we do note the following:

Indeed, Dinosauromorpha (Triassic - Recent) - the clade containing critters closer to dinosaurs than pterosaurs - is populated at its base by roadrunner-sized bipeds like Marasuchus and Lagerpeton (Late Triassic). Thus, it whas long assumed that the last common ancestor of dinosaurs was a small biped. Imagine our surprise in 2003 when Silesaurus (Late Triassic) - a retriever-sized quadruped - was described and found to be represent the sister group of Dinosauria. After this description, many unidentifiable remains in museum drawers were found to belong to related animals, such that Silesauridae is now a speciose group. But of dinosauromorph diversity, only proper Dinosauria survived the Terminal Triassic extinction event.

Yikes. Imagine a strict consensus of these three hypotheses.

This is a fundamentally different type of monstrosity. To compare:

Duplication: In discussing euryapsids we mentioned in passing that when you start multiplying elements like phalanges (right) or cervical vertebrae, keeping track of traditional homology becomes meaningless. For example, the various phalanges of digit I in the derived plesiosaur D each, in a way, partake of the identity of the single digit I phalanx of the ancestral eosauropterygian A, even though they all fail the conjunction test. What remains homologous is the developmental process by which phalanges are generated.

Identification: In discussing snakes, ichthyosaurs (right), and pterosaurs we encountered the problem of there being no test of homology, even similarity, that we could use effectively to get at the identity of certain elements.

Shifting identities: The hands of theropod dinosaurs pose a new and different challenge. Background: Generations of paleontologists have recognized a trend in theropod evolution toward the reduction of fingers. Consider:

It seems so clear: Theropods go from a five fingered hand to a three fingered hand by the sequential loss of digits V and IV, whereas digit I is specialized and readily recognizible as a thumb. 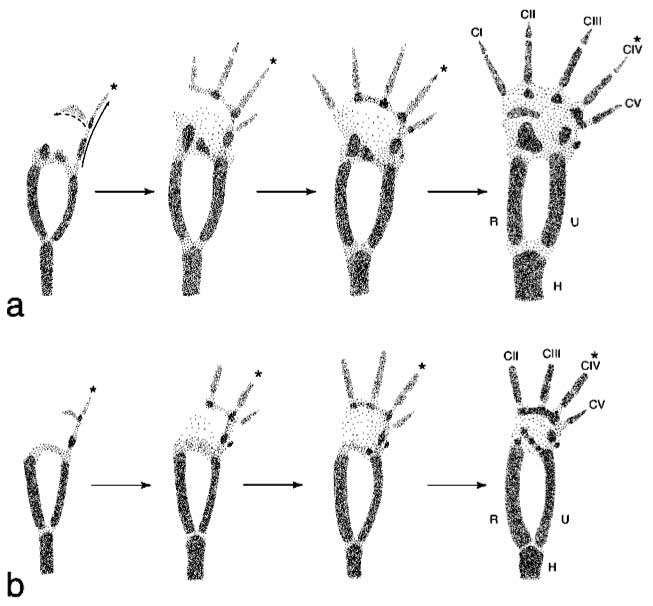 from Talk.origins
Now the monstrosity: