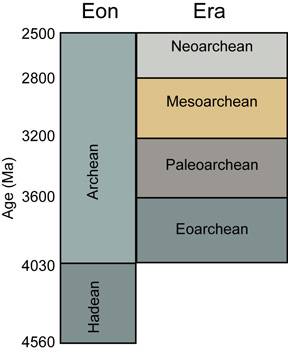 Record of the oldest rocks is very poor: because of great age, is often buried and/or has been recycled (metamorphosed, melted, etc.) over the last few billion years.

Drip tectonics: prior to rise of proper plate tectonics, it seems that subduction zones didn't exist as such. Instead, the higher amount of radioactivity within the core and the lack of dissolved water in the mantle instead favored downward-plunging "drips" of lithospheric material sinking into the mantle. The downward-warping produces basins on the surface, which fill in with marine sediments.

Find unusual lithologies and suites of rocks in Archean:

Note that there does seem to be a form of mineral evolution: not minerals descending from earlier minerals, but rather large scale changes in the chemical conditions of the Earth (and before that, the proto-Earth) that allow for different suites of minerals to be formed at different periods.

Where did granitic material come from, if mid-ocean ridges only produce mafic materials? A "hot topic" in historical igneous studies, but seems to be related to partial melting and recycling of materials near ancient subduction zones: as material is subducted and remelted in the presence of water, produces lots of felsic materials. These bubble up as a sort of "scum". Comparable granitic material is present in modern Iceland.

Archean life would have very short food chains, but contained a great diversity of chemical pathways. Life would have been limited to the water. Most of the shallow seafloors, shores, etc. would be covered in algal/bacterial slime. As photosynthesizers spread, the oceans and atmosphere began to fill with oxygen.

Earliest life was probably exceedingly simple: far simpler than any modern form.
Would have been:

Once thought to have appeared in "quite little pond" ("primordial soup").
More likely: formed near the (then more active) oceanic vents along mid-ocean ridges:

As fuel supply decreased, various new forms appeared from among the proto-organisms:

With photosynthesizers come free oxygen: begin to change global atmosphere. Has most direct effect as the Proterozoic begins.

LUCA: the "Last Universal Common Ancestor" (i.e., the ancestor of Bacteria, Archaea, and Eukaryota) would not have been the first living thing. Instead, there would have been a history and diversity of living forms that included the ancestors of LUCA as well as many diverse side branches that have no living survivor. Based on genetics divergence data and biomarker traces, LUCA would have to have been present by around 3.8-3.5 Ga (and thus around in the Paleoarchean, if not earlier).

Late Archean Events
Here are a brief video about the oldest rocks:


And a trilogy of videos about the origin of life:
Where Did Life Come From?:


The Physics of Life:


What Was the Ancestor of Everything?


"Enter Life", a short film by Faith Hubley created for the National Museum of Natural History explaining abiogenesis in an entertaining and (mostly) wordless way. (This used to run in a loop in the origin of life alcove of the old paleontology halls):