Key Points:
•Looking at their most basal members, Trilobita and Chelicerata show strong similarity, but this is soon overwhelmed by evolutionary novelties on either stem.
•Chelicerate tagmosis shows specialization of the prosoma (with six pairs of appendages including chelicerae and pedipalps) and opisthosoma(with book gills or their derivative).
•Living pycnogonids are total freaks. Fossil ones, only slightly less so.
•Xiphosura contains plesiomorphic members with distinct chelicerae but unspecialized pedipalps. The group is probably paraphyletic.
•Arachnida, the terrestrial chelicerates, internalize their book gills to form book lungs, and are specialized for external digestion of prey.
•Fossil Stem cheliceramorphs occur in the Burgess Shale.
•Chasmataspidida represents a clade or grade group intermediate between Xiphosura and Eurypterida.
•Eurypterida is a major radiation of large marine chelicerates during the Paleozoic. These were apex predators during the Ordovician and Silurian.
•In the later Paleozoic, euryapsids managed to survive by invading marginal brackish environments and developing some facility at emerging from the water.
•The phylogenetic relationships between eurypterid groups and arachnids is unclear.
•Scorpion-like arachnids were among the first metazoans to emerge from the oceans. They occupy a variety of ecomorphs. Aranae (spiders) are especially derived and successful.
•Fossil arachnids include proper scorpions, trigonotarbids, Haptopodids, and Idmonarachne.
•Beyond a spider/whip-scorpion clade - Tetrapulmonata - arachnid phylogeny is unresolved.

"People will be able to survive without honeycreepers and monk seals. But if the wolf spider is in trouble, we are in trouble, too."
(Susanna Moore.)

Note, for example the post-anal telson (spine), a feature soon lost in trilobites but retained and elaborated in chelicerates. Indeed, one group, Aglaspida, was traditionally regarded as basal xiphosurans, but have recently been identified as basal trilobitomorphs (Ortega-Hernandez et al., 2013)

We have considered Trilobitomorpha previously. Now we turn to Cheliceromorpha - Chelicerata and its closest relatives. 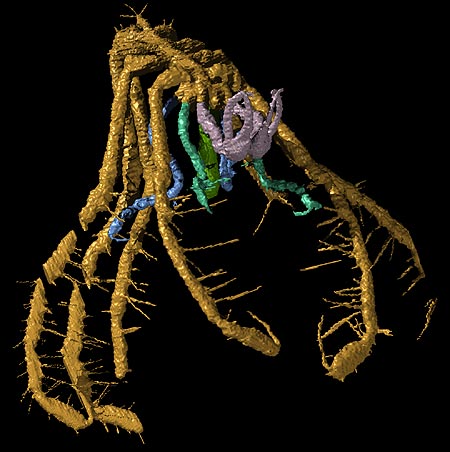 Haliestes dasos (Sil.) from BBC News
Pycnogonid fossil record: Six fossil pycnogonids are known, one being a larva (Cambrian) and the others adults (Sil. - Dev). Still, this sparse sample demonstrates the usefulness of fossils in phylogenetic analysis:

Living pycnogonids lack many features we associate with arthropods, E.G.:

Whether we see this as a reversal or ancestral depends on our picture of the arthropod stem. Fossil pycnogonids, themselves, tell us this much. During the Paleozoic, they had: All of the are plesiomorphies! Synapomorphy:


From the Triassic onward, these are very similar to living ones, like Late Jurassic Mesolimulus.
Paleozoic "xiphosurans" (right) show clear segmentation of the opisthosoma. from Naturephoto.cz
Arachnida (land chelicerates) (Sil. - Rec.) The land chelicerates. Among the first land animals, the arachnids constitute a diverse radiation into many ecological roles. Their diversity is discussed below. General characteristics:

Cheliceromorph phylogeny: Chelicerates have one obvious morphological synapomorphy: chelicerae. Based on their innervation, they appear to be homologous to the antennae of trilobites and most other arthropods (See Legg et al. 2013.) Thus, chelicerates do not so much lack antennae as possess them in a derived form and use them for a different purpose. This seems like a tenuous way to unite this much morphological disparity, however fossil forms fill the gaps and tell their own interesting stories. 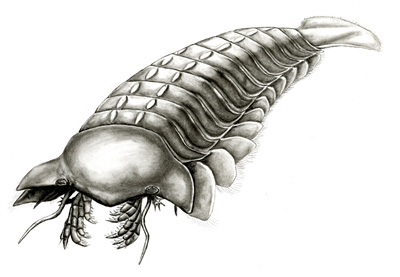 Sanctacaris uncata from Life Before the Dinosaurs
Stem cheliceromorphs (Cambrian) The diversity of animals closer to chelicerates than to trilobites is substantial, and includes some favorites of the Burgess Shale like Sanctacaris (right). Like chelicerates, it has: Other stem-cheliceromorph grade animals include:

"Merostomata" has long been known to be paraphyletic. Lamsdell, 2013 argues that Xiphosura as traditionally defined is, as well and redefining it phylogenetically to be the last common ancestor of living horseshoe crabs and arachnids and all descendants. The monophyletic Xiphosurida -the clade of horseshoe crabs - is nested within it.

Although one soon tires of "horseshoe crab-grade" fossil chelicerates, things do happen in this part of the tree, where we see trends toward the complete loss of exopodites from the proximal appendages, and the stabilization of the number of opisthosomal segments.

Dekatria: (Ordovician - Quaternary) The last common ancestor of Chasmataspidida, Eurypterida, and Arachnida and all descendants.

Chasmataspidida (C - D) A minor group whose general morphology spans the gap between Xiphosura and more derived chelicerates. Characteristics: These characteristics are shared with eurypterids and (in modified form) arachnids. Chasmataspidids' synapomorphy: 
Alas, eurypterid systematics are still largely Linnean. Although some phylogenetic analyses have been performed (E.G. Tetlie and Cuggy, 2007 and Lamsdell et al. 2010) but suffer from:

Thus, we don't really know if Eurypterida is monophyletic. Significant, because it is often informally suggested that they are paraphyletic with respect to arachnids.

Eurypterid convention dominated by Pterygotus (left) and Stylonurus (right)
in classic image by Charles R. Knight from Wooster Geologists
Eurypterid ecological strategies: Eurypterids were top marine predators during the Silurian but had been replaced by vertebrates by the middle Devonian. It's tempting to think that they hung on thanks to their ability to invade marginal habitats, as many held out in brackish environments and seem to have been able to make excursions onto land. Seem to have been euryhaline. Depositional settings of eurypterid fossils indicate that they ranged from fresh to marine water, that individual animals seemed to be tolerant of a broad range of salinity, and that different groups tended to have preferences for a particular environment. Some have limbs that seem robust enough to allow excursions onto land. Evidence includes: Thus we have evidence for eurypterids that both ought to be able to come onto land and direct evidence that they did so. Perhaps their ecology was like that of some crabs. (Scorpions, whip-scorpions, pseudoscorpions, whipless whip-scorpions, mites, ticks, daddy longlegs, spiders, sun-spiders, and their extinct relatives.) (Sil. - Rec.) General characteristics (review): Arachnids and eurypterids are each considered monophyletic, nevertheless it is difficult to look at a scorpion and not wonder whether they, and their derived terrestrial relatives, might not be nested within Eurypterida. By all accounts, scorpions appear early and represent an ancestral form. (Note the number of preabdomen and postabdomen segments.) Palaeophonus (Sil) from solpugid.com
Scorpiones (Scorpions Sil - Rec.) Scorpions were among the first animals to invade the land. All scorpions are predatory and employ their telsons to transmit venom. The largest scorpion on record was the carboniferous Pulmonoscorpius kirktoni at roughly 70 cm length. Solpugid from wikipedia
Others without significant fossil record, briefly mentioned:

Here be dragons. Schultz, 2007 underscores the basic problem in a morphological analysis. He (and others) identifies one likely clade - Tetrapulmonata, containing spiders and the various whip scorpion groups. however he can't resolve other relationships near the base of Arachnida.

Sharma et al.'s 2014 phylogenomic analysis suggests that very rapid evolution of portions of the arachnid genome swamps phylogenetic signal. Correcting for this by using only slowly evolving portions of the genome, they reach the surprising conclusions that:

Is our assumption that chelicerates became terrestrial only once valid at all? Stay tuned!