Key Points:
•Whereas Chelicerata has long been known, Mandibulata has only been recognized within the last two decades thanks to the combined application of molecular and morphological phylogenetic methods.
•The mandibulate body has a head and a trunk whose segments may be divided into a thorax and abdomen or not.
•The mandibulate head appendages form one or two pairs of antennae, mandibles, and two pairs of maxillae.
•Mandibulata contains Myriopoda (centipedes and millipedes) and Pancrustacea (traditional crustaceans and Hexapoda.)
•Stem mandibulates include the Burgess Shale taxon Marella and other small and poorly known taxa.
•Myriapoda contains Diplopoda (millipedes), Chilopoda (centipedes), Symphyla, and Pauropoda, each with unique patterns of tagmosis. Their synapomorphies include the exclusive use of a tracheal system for breathing and the presence of repugnatorial glands for the secretion of noxious chemicals.
•Chilopoda is present on land by the end of the Silurian, making them among the earliest land animals. In the form of Arthropleurida, diplopodans achieved their ecological zenith during the Carboniferous.
•A full inventory of Pancrustacea is impossible here. Diverse marine taxa with invasions of the land by isopods and Hexapoda.
•Pancrustacean phylogeny is unsettled, but by any account, Hexapoda is nested in its crown.
•Ancestral hexapodos are soil-dwellers. More derived forms are, in sequence, larger, possess wings, can fold their wings, and ultimately are holometabolous.
•The Late Devonian and Early Carboniferous comprise the Hexapod Gap, and interval when hexapods fossils are vanishingly rare. This corresponds to a similar gap for vertebrates - Romer's Gap.
•The Arthropod Head Problem, the struggle to understand the homologies of arthropod head appendages, seems to have been solved by the discovery of fossil stem arthropods and radiodonts from Chengjiang that preserve patterns of innervation of head appendages.

"Working out the evolutionary stages by which all these combinations could have appeared is so difficult that has long been known as 'the arthropod head problem.' In 1960 R. E. Snodgrass even hoped it would not be solved, as trying to work out solutions was so much fun"
(Imran Ali Sani and Shahjahan Shabbir Ahmed, 2015.)


The remaining arthropod diversity falls into Mandibulata, whose living members include:

Evolution of the concept:

The phylogenetic hypothesis of Mandibulata reflects phylogenetic work of the last decade by both molecular (E.G. Regier et al. 2010.) and morphological (E.G. Legg et al. 2013.) workers. It differs from the traditional taxonomy that still appears in many texts, where Hexapoda and Myriapoda form Uniramia - the arthropods without biramous appendages. Traditionally, there was no conviction that Uniramia and Crustacea were particularly closely related. Key aspects of the emerging consensus: 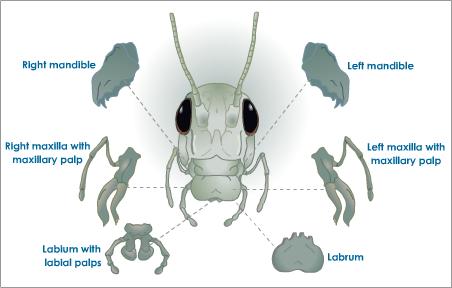 About mandibulatan head appendages: Whereas the equivalence of head appendages in trilobites and chelicerates is straightforward, those of Mandibulate are complex. We see, from front to back:

This katydid posed with its mouthparts for me.
All head appendages are readily visible in the katydid at right. Recall that Mandibulata encompasses the living arthropods characterized by mandibles and two pairs of maxillae. This group encompasses over 75% of living animal diversity. With that much diversity, it is a wonder that with the application of phylogenetic techniques and the illumination offered by fossils, we understand its evolutionary history as well as we do. In this presentation we follow the results of Legg et al. 2013. Stem Mandibulata: Mandibulata seems to have originated during the Cambrian, with organisms on the mandibulate stem occurring in the earliest Cambrian. Stem mandibulates include: Note: All of the tiny bivalve taxa discussed above, along with living analogs, seem to develop from larvae possessing head appendages only, then to add segments and appendages posteriorly with each molt. This gives us confidence that their anterior head appendages are antennae. For our purposes, the presence of these appendages is a synapomorphy of total-group Mandibulata.

Mandibulate arthropods with homonomous trunks (i.e. with repeating unspecialized modules). Whether they represent the first fully terrestrial animals depends on the resolution of claims that some early scorpions were actually aquatic. They were major components of the Silurian and Devonian land faunas, achieving large size as predators and as detritivores and grazers.

Diversity Four monophyletic groups are known: Most recent phylogenetic analyses (E.G.: Shear and Edgecomb, 2010) reveal the phylogeny at right. Symphyla and Pauropoda have no fossil record except in Neogene amber, so we focus on the other two groups.

Narceus americanus from Wikipedia
Diplopoda (millipedes: mostly herbivores and detritivores. Sil - Rec.)
Millipede head appendages consist of: Body segments: In millipedes, adjacent segments are fused developmentally so that each segment has two pairs of limbs, spiracles, etc. (An extreme development of the pattern in Pauropoda in which a single tergite covers pairs of segments. - Synapomorphy!) Fossil diplopodans:

Scutigera coleoptrata from Wikipedia
Chilopoda: (centipedes; primarily predators. Sil. - Rec.) Despite having a homonomous trunk, centipedes achieve a degree of biomechanical diversity, with some specialized for fast running and compact bodies (Scutigera right) and others being more serpentine.

Tagmosis: Centipedes have a single pairs of limbs, spiracles, etc. per body segment (plesiomorphic). Head appendages are plesiomorphic for Myriapoda:

Chilopod synapomorphy: The first trunk limbs are modified as poison-injecting forcipules and co-opted into the feeding apparatus.

Heterocrania rhyniensis, a Devonian Euthycarcinoid from University of Aberdeen
Myriapod mystery: Given that Pancrustacea and Arachnomorpha were ancestrally marine, we would expect the earliest myriapods to be marine also. Although definite marine myriapods elude us, we are closing in:

Pancrustacea (equivalent to "Tetraconata" of some authors) contains all traditional crustaceans and hexapods. Work of the last decade has produced the growing consensus that "crustacea" is paraphyetic with respect to Hexapoda, but there is no clear consensus of exactly where, within Pancrustacea, hexapods go. For now, we follow the morphology-based analysis of Legg et al. 2013., but interested students should also review the molecular result of Regier et al., 2010. Nauplius larva from Vatten-Kikaren
Synapomorphies of Pancrustacea, involved soft tissue characters of the brain and the shape of ommatidia, and exceed the technical limits of this course. Indeed, the whole topic is so complex that we can only scratch the surface. Beyond possessing the synapomorphies of Mandibulata, Pancrustacea displays:

Pancrustacean head comparison from The Snodgrass Tapes
Aquatic "crustaceans" are the only mandibulates plesiomorphically to retain: but these are synapomorphies of the total-group Mandibulata. Independently lost in Hexapoda and Myriapoda. 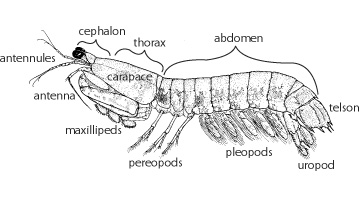 Pancrustacean tagmata from U C Berkeley
Crustaceans ancestrally display tagmosis of the post-cepalic body into:

Before discussing pancrustacean phylogeny, an inventory of major monophyletic groups:

Until recently, Ostracoda and Thecostraca (the barnacles) would have been united in the clade Maxillopoda however recent analyses do not find this to be so. Two major groups, each with its own pattern of adult plates: Because they can form, in essence, barnacle "reefs" they have a very good record. The earliest putative barnacle: Collins and Rudkin, 1981 report on Priscansermarinus barnetti - a possible lepadomorph from the Cambrian Burgess Shale. 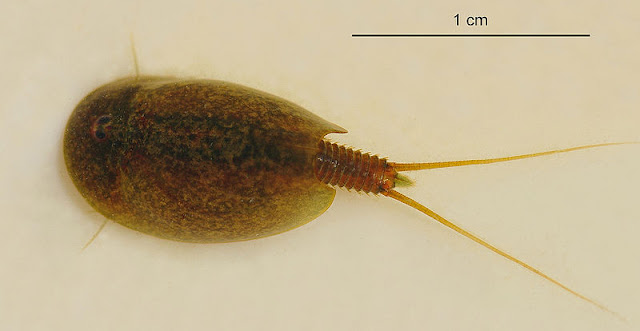 Cephalocarid from Ark in Space
Cephalocarida (No fossil record): Horseshoe shrimp. A minor group with only twelve species. Strictly shallow-marine inhabitants of intertidal zone. Morphologically simplified, with no pleopods, and second antenna shifted posterior to mouth in adults. Spelonectes sp. from UC Berkeley Museum of Paleontology
Remipedia: (Carb. - Rec.), Discovered in 1981, these morphologically, are the most primitive looking crustacean group, with homonomous bodies, but for the characteristic crustacean tagmosis of cephalic appendages. Most live in submerged caves and places of permanent shade in brackish-saline aquifers. Thus their eyes are (presumably) secondarily reduced. Characteristics: Remipedes were discovered as the Carboniferous fossil Tesnusocaris goldichi (Neiber et al., 2011).

Proper insects and their close relatives.

See below for more information. But there are significant differences. Alas, insect cuticle is not calcified. Thus, their fossil record is poor compared to that of crustaceans (though not as bad as you might think). What there is comes largely from Konzervat-Lagerstätten

The current state of the art is unsettled, with large areas of disagreement between molecular and morphological results:

We await a future consensus. 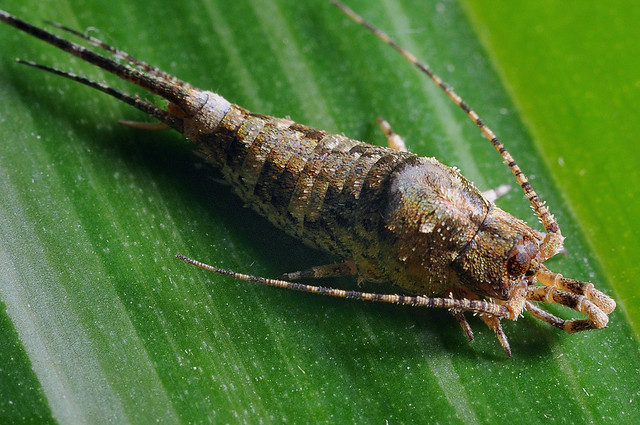 Bristletail from Flickr
The weird part: Hexapoda (Dev. - Rec.): Proper insects and their close relatives. Closely related to Remipedia in current results. Ancestrally each group is adapted to life underground, the remipedes in saline aquifers, the hexapods in moist soils.

Alas, insect cuticle is not calcified. Thus, their fossil record is poor compared to that of crustaceans (though not as bad as you might think). What there is comes largely from Konzervat-Lagerstätten

Insect head appendages from Scioly.org
Hexapod characteristics: Hexapods are significantly different from other pancrustaceans in their tagmosis.

Basal hexapods are sometimes termed "Parainsecta" and include creatures like:

All are soil-inhabiting detritivores and predators.

These are distinct from basal hexapods in being larger and spending time on the surface. Insecta is diagnosed by a list of technical anatomical synapomorphies. Doomed adult mayfly
Within Insecta is Pterygota, the winged insects (first organisms to slip the surly bonds of Earth). In most, a pair of thoracic wings (arguably derived from the exopodite ramus) is matched with the posterior two limb pairs. In some extinct forms, there was a third small pair anteriorly, making a wing pair corresponding to each leg pair. The evolutionary origin of wings is enigmatic, but a leading hypothesis holds that they are homologous to the dorsal ramus of ancestral biramous appendages. Note: before considering the last pterygote group, consider what the life cycle of these "primitive pterygotes" tells us: Unlike apterygotes, pterygotes undergo a partial metamorphosis from and aquatic nymph to a terrestrial imago (adult). The Arthropod Head Problem and the Power of Paleontology:

Questions about the homologies of various arthropod head appendages have vexed generations of zoologists. Today, they are finally yielding to the application of developmental, genomic, and paleontological data. First a review. The arthropod brain forms from the integration of the front three pairs of ganglia. Our first tool in homology assessment is which cerebral ganglion an appendage is innervated from. Terminology: In Euarthropods, we see these patterns of innervation: Combining this information with informed hypotheses of phylogeny, it is becoming clear that:

Alalcomenaeus sp. from Earth and Sky
Chengjiang: During the last decade, gloriously preserved arthropods from Chengjiang that show the nervous system have enabled us to see that this arrangement has very deep roots. For example:

Do all panarthropods fit this pattern? No. Remember the antennae of onychophorans? These have protocerebral innervation. That is:

Are they homologous to anything? They certainly resemble the anterior appendages of Aysheaia and other early Paleozoic "lobopodans."

Now, from the magic hat of Chengjiang, emerges the radiodont Lyrarapax unguispinus (Cong et al. 2014). It, too, preserves traces of nervous tissue showing that its raptorial appendages are also protocerebral, and are likely homologs to the antennae of onychophorans. 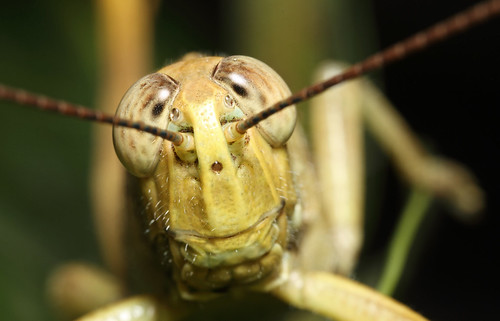 By Tristan Gardner from Flickr
Now it gets weird. The big appendages of lobopodans and dinocarids disappeared before the last common ancestor of Arthropoda. Are they completely gone? Arguably not. The labrum ("upper lip") is a puzzling feature: According to Cong et al., the part of the tritocerebrum that innervates the labrum is homologous to the portion responsible for onychophoran antennae and radiodont big appendages! The issue is far from settled, but it follows that the labra of euarthropods are homologous to the big appendages of lobopodans and radiodonts.

Without the fossils, we couldn't have known.