"Organized Fossils are to the naturalist as coins to the antiquary; they are the antiquities of the earth; and very distinctly show its gradual regular formation, with the various changes inhabitants in the watery element. (William Smith, 1817. Stratigraphic System or Organized Fossils.)

Paleontology can illuminate important issues in both biology and geology. Today's topic addresses one of paleontology's greatest applications in the service of geology.

Stratigraphy: The detailed history of Earth's surface revealed by the order and relative position of superposed rock units. Using the stratigraphic principles of Nicholas Steno: (1668) and the uniformitarian principle of James Hutton (1795), Geologists of the early 19th century could establish the relative ages of rock units on the formation scale. Although any kind of rock can provide useful information, stratigraphers are typically interested in sedimentary rocks (sandstone, limestone, shale, etc.) formed from the transported remains of preexisting rock.

Give us Time Lines!

If we want a global history of Earth's depositional environments, we ideally want to identify time lines in the rock record: geographically widespread surfaces that formed at the same time as a result of the same events, like: In the early 19th century, looking strictly at the rocks, themselves, these were not easy to find, and stratigraphers had to address confusing aspects of the rock record like:

But as it happens, many fossils provide decent, widespread approximations of time-lines.

Index Fossils, Correlation, and the birth of Biostratigraphy

William Smith's geologic map from
University of Nebraska Omaha - GEOL1170
By noting the fossils present, it became possible to: In 1815, Smith published the first geologic map of England and Wales (or anything - right). The great thing: These correlations made the association of formation scale units into larger ones (the stages and systems on which the Geologic Time Scale is based) possible. Thus, essentially all stratigraphy above the formation scale depends on biostratigraphy. The ammonite Sphenodiscus, restricted to Maastrichthian Stage of Cretaceous.
Which fossils do we use?

Rock units are not time units!

With Steno's and Smith's principles as a basis, geologists define a hierarchy of higher order rock units, including:

Larger units need not be contiguous in space but are assumed to be contiguous in time. Their upper and lower boundaries must be instantaneous and isochronous. From these, we derive the Geologic Time scale, in which geochronologic Periods correspond to lithostratigraphic Systems.

In GEOL 331 we assume that all students, regardless of background, are have memorized the The Geologic Time Scale - simplified version, and are able to interpret a detailed version.

Remember, when we talk about a formation, stage, series, or system, we are talking about a bunch of rock, not an interval of time. The numerical dates that we place on their upper and lower boundaries are secondary to the identity of the rock units. For example, the formal base of the Jurassic is a stratotype - a specific contact in the Kuhjoch section of the Karwendel mountains in Austria, between rock units dated to 201.3 Ma. If we were to discover that Triassic rocks below that contact were actually only 200 Ma, we would not say, "Oops. I guess the rocks of the stratotype are Jurassic after all." Rather, we would revise the age of the boundary between the Triassic and Jurassic.

Primary data of biostratigraphy: presence or absence of a fossil taxon in a geologic horizon

Biozone (often just "zone"): Rock unit characterized by one or more taxa that permit it to be distinguished from adjacent rocks.

The following examples are drawn from the hypothetical microcosm at right. As we explore these, note that the definition of most biozones requires some element of uncertainly or inferrence.

Teilzone of taxon A at locality I.

Taxon Range Zone of taxon A

Interval Zone of taxon A and B FADs

Assemblage Zone of taxa A - D

Abundance Zone of taxon B

Biostratigraphy opened the door to global correlation of strata, but is, nevertheless subject to biases and filters that make it more reliable on a local scale than a global one.

Biases of the Rock Record

There are no perfect index fossils. Lesson - Evolution (without which biostratigraphy would be impossible) can be difficult to interpret.

Mass Extinctions: Abrupt simultaneous extinctions of numerous taxa, if real, are powerful biostratigaphic markers and are interesting ecological phenomena in their own right. Alas, identifying them isn't straightforward. It requires continuous deposition and a reasonably dense fossil record.

The coelacanth Latimeria from BBC Earth
Lazarus Taxa: Taxa that temporarily "disappear" and then reappear in fossil record. This might be because of environmental changes, or local extirpation and re-immigration. E.g. North American horses, coelacanths (right). Miocene tiger shark fossil in Holocene sediments from Polar Trec
Zombie effect: Post-extinction reworking of specimens into younger sediments (right). As in Fasstt et al., 2000, these can be significantly misleading. 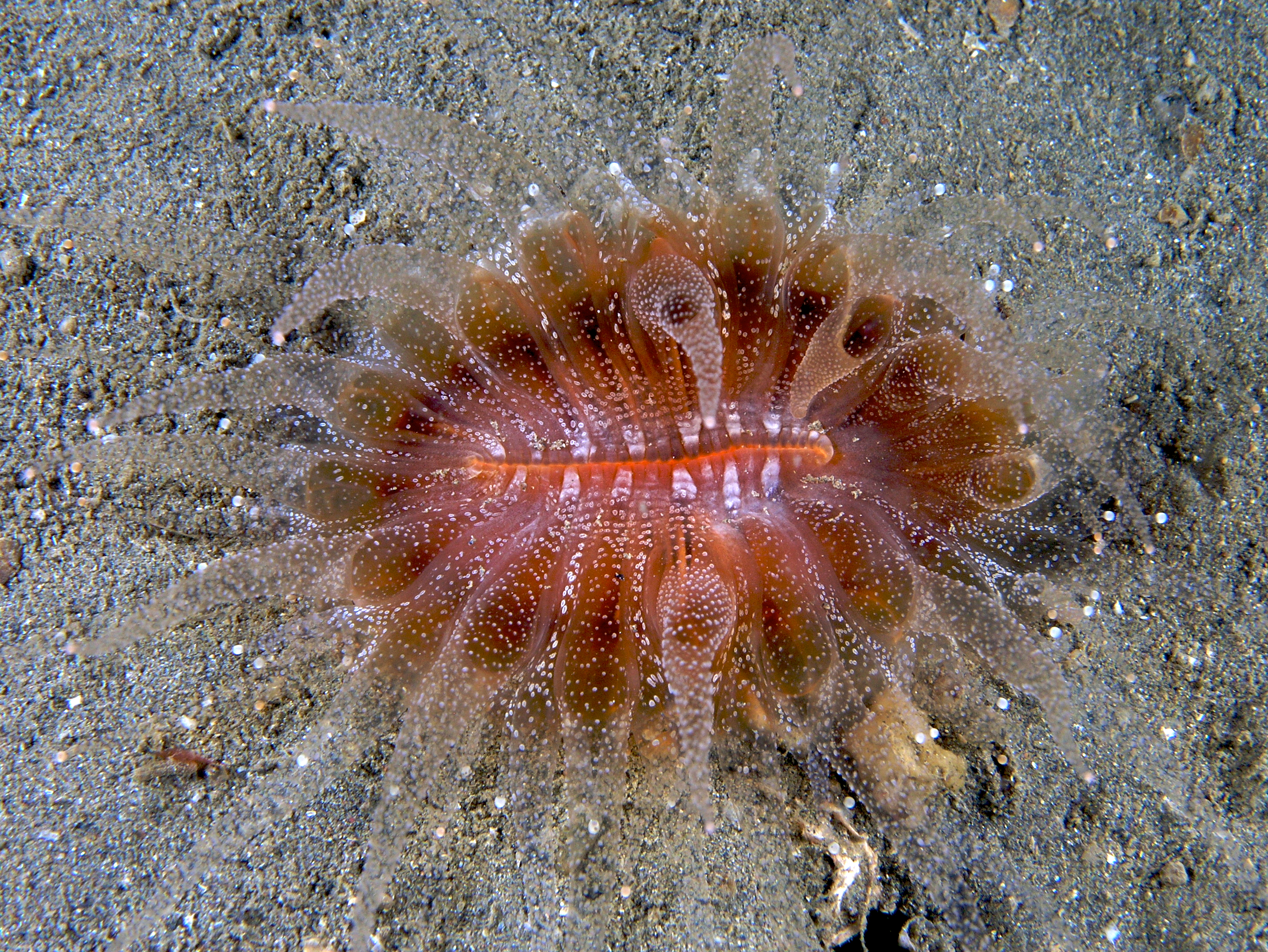 The bad news: Constraints on biostratigraphy Mindful of these considerations, we see why biostratigraphers employ a variety of zone definitions despite their invocation of conjecture and assumptions: In many circumstances, the ability to bring lots of data to bear on a problem is simply more important than the avoidance of the fuzziness that follows from inference and conjecture. The biostratigrapher seeks the optimal tradeoff for the specific situation.

Biostratigraphy is the principal determinant of such important things as period boundaries. Boundaries between periods are arbitrarily decided, but usually involve biostratigraphic markers. Some conventions:

E.G. the Silurian-Devonian boundary (right) was decided to be the base of the Monograptus uniformis (a graptolite) zone. Over forty such golden spikes have been established.

But, how does this help us with the stratigraphy of environments in which fossil preservation is spotty and intermittent?

When biostratigraphic data is combined with numeric age information we can use biozones as the basis for biochrons - time units! (as opposed to biozones which are rock units)). 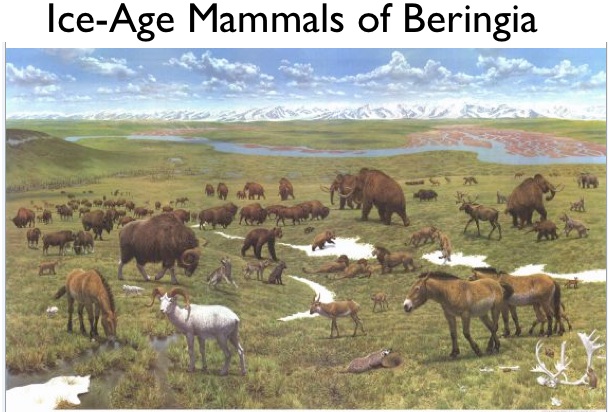 Central Alaska during the Rancholabrean NALMA from Geo Currents
One famous application: Land Vertebrate Ages. Originally developed during the early and mid-20th century as North American Land Mammal Ages (NALMAs), these were based on the recognition of the regular co-occurrance of distinct mammalian assemblages. NALMAs answered the need for some kind of biochronological tool for North American Cenozoic terrestrial rock units, but were limited by the fact that Cenozoic mammal fossils tended to occur in isolated pockets, often in places with little precise stratigraphic context. (Cave deposits, for example.) As a result, they could not be used as the basis for proper rigorous biozones based on the rocks in which they were found. Instead, they are tied to the time intervals in which the assemblages are inferred to have lived. For regions like the continental deposits of North America, however, NALMAs are much better than nothing, and more frequently mentioned than proper biozones. The NALMAs of the Pleistocene Epoch, for example are good examples and often cited. E.G.:

Over a century of development, competing criteria were used in definitions of ages. Today, biostratigraphers must:

Nevertheless, as a quick-and-dirty, NALMAs/Land Vertebrate Ages are sufficiently useful that they have been expanded globally and pushed confidently into the Late Cretaceous as Land Vertebrate Ages. But note: The use of Land Vertebrate Ages is a tradition among North American paleontologists and stratigraphers originally born of necessity but now, perhaps, just a tradition. Prothero, 1995 reviews the application of new data from improved radiometric dating and magnetostratigraphy, and concludes that the time is ripe for incorporation of NALMAs into proper biozone-based biostratigraphy.

All rest on the assumption that biostratigraphic units are good proxies for time. As indicated above, this seems to be a good first-order approximation.

Besides hopefully constraining their age and sequence, does biostratigraphy add to our kowledge of the deposition of sediments? Actually, yes.

Graphic correlation: method for stratigraphic correlation based on statistical correlation of first and last appearances, but not biozone terminology. Facilitates comparison of locality sections containing local FADs and LADs of the same taxa. Used to:

Composite standards: The examples above correlate teilzones from pairs of localities. On a larger scale, the data used to achieve this can be combined into substantial composite standard databases that: Comparison of information from a particular locality with the composite standard facilitates robust identification of range extensions, hiatuses, and outliers.

Moral: No method of biostratigraphy lacks significant biases and limitations, however biostratigraphy compensates by enabling stratigraphers to bring an overwhelming quantity of data to bear, making it cumulatively very powerful.