Key Points:
•The record of eukaryotes of increasing complexity starts ~ 1.6 ga.
•Eukaryotic cells are composites of prokaryote-grade organisms that have colonized one another by endosymbiosis.
•Eukaryote phylogeny is unsettled, but the groups Archaeplastida, Opisthokonta, and Chromalveolata are well-supported.
•Major fossil-forming groups include: Rhodophyta (red algae), Viridiplantae (green plants), Radiolaria, Foraminiferida (foraminiferans), Alveolata (incl. dinoflagellates), Bacillariophyceae (diatoms), Coccolithophyceae (coccolithophorids), choanoflagellates, and Metazoa (animals).
•Each group listed above yields distinct fossils and has its own life-history/reproductive strategy.
•Choanoflagellates appear to be the closest relatives of metazoans.

"The view of evolution as a chronic bloody competition among individuals and species, a popular distortion of Darwin's notion of "survival of the fittest," dissolves before a new view of continual cooperation, strong interaction, and mutual dependence among life forms. Life did not take over the globe by combat, but by networkiing. Life forms multiplied and complexified by co-opting others, not just by killing them." (Lynn Margulis, 1986. Microcosmos: Four Billion Years of Evolution from Our Microbial Ancestors)

Includes study of microscopic remains of single-celled organisms. We have touched on the difficult record of early life forms. Starting with the 1.6 Ga Ruyang Group, however, we encounter eukaryotic cell fossils of increasing diversity (Yin, 1997). Schematic of typical eukaryote from The Gates of Academe

The key concept here is the role of endosymbiosis - the coopting of other organisms - in the acquisition of the characters that we associate with the "typical" eukaryotic cell, Including: Thus, depicting their evolution as a strictly branching phylogeny is misleading. What we see instead is reticulation (interweaving) at the largest scales of life-history. (See Palmer et al., 2004) 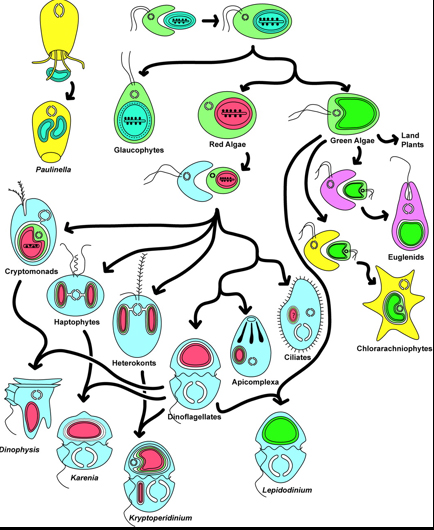 Endosymbiosis
Organelles are variably distributed in the major groups:

Recall that such Eukaryotic abilities as:

May have been adaptations to the rise of aerobic environments during the Great Oxygenation Event. Another trend we see among eukaryotes is increasing versatility in the management of protein synthesis.

An operon with: 1.) RNA polymerase, 2.) Repressor protein, 3.)Promoter, 4.) controlling region.
Operons: We mentioned how information in DNA is transcribed into proteins previously. We didn't discuss what triggers the process. The magic of protein synthesis is that DNA is only transcribed into mRNA when the protein it codes for is needed. E.G.: The bacterium Escherichia coli freely metabolizes glucose, but if glucose is lacking, and lactose is present, it can metabolize lactose by producing an enzyme, beta-galactosidase, that breaks lactose down in to glucose and galactose. But how does it know when to make beta-galactosidase?

The work of François Jacob and Jacques Monod established the answer (Nobel Prize in 1965):

The operon: The stretch of contiguous DNA containing the promoter, the controlling region, and the genes coding for beta-galactosidase and other proteins involved in lactose metabolism. Animation.

Big Point: Somewhere on the genome, the lac repressor protein is, itself, coded for in another operon by a repressor gene whose activity may be regulated by yet other other repressors:

A phylogeny of significant groups from Kim and Graham, 2008 appears at right.

Note: The phylogram to which this cladogram links superimposes the phylogeny of fossil-forming groups on to the stratigraphic record. Typically we could infer minimum divergence ages with some confidence. In the case of Eukaryotes, however, this is perilous as so few yield fossils. El Albani et al. 2014, for instance describe "colonial" organisms with features associated with colonies of eukaryotic cells in the 2.1 Ga Francevillan B Formation of Gabon. These colonies were not organized into bodies in the manner of multicellular fungi, plants, and animals, but were akin to congregations of independent cells like slime molds.

Hypotheses of the phylogeny of eukaryotes are subject to frequent revision, so we focus on descriptions of major fossil-forming groups, rather than the broad patterns. And yet a few words on large groups: Foraminiferan from Wikipedia
Foraminiferida: (Cambrian - Quaternary) In essence, "armored amoebas." Referred to as "forams." Primarily heterotrophs, feeding by means of thread-like pseudopods that project through minute openings from tests, although other feeding strategies exist including kleptoparasitism in which the chloroplasts of ingested prey are retained. Some benthic forams have zooxanthellae, including diatoms and dinoflagellates. We assume that very large extinct types, including fusulinids and nummulitids with low surface to volume ratios had primarily to depend on zooxanthellae. Dinoflagelalte from College of DuPage BIO1151
Alveolata: Characterized by a layer of flattened alveoli that supports the cell membrane. We focus on Dinoflagellata: (Sil. - Rec.) Dinoflagellates are typically marine, but some inhabit fresh water. Some possess chloroplasts, others don't. Chloroplasts, where present, are bound by three cell membranes rather than the original two. Perhaps they derive from eukaryotic photosynthesizing symbiotes (aka zooxanthellae). Some dinoflagellates are, themselves, zooxanthellae of multicellular metazoans. Blooms of dinoflagellates are responsible for red tides. Potential synapomorphies: Note, although dinoflagellate-like fossils start in the Silurian, the good record of unambiguous dinocysts begins in the Triassic. Roughly coincides with late estimates of the end of acritarchs. 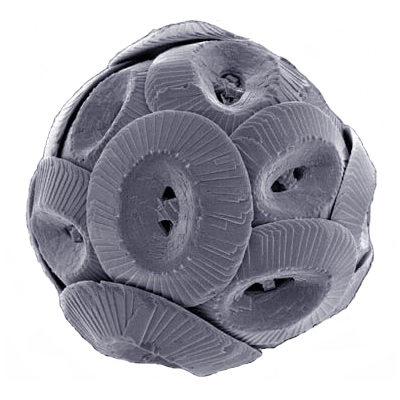 Life cycle not well studied, but alternate between haploid and diploid phases, and can reproduce asexually through mitosis during either life stage. Different coccolith morphs may be secreted by the same species depending on life stage.

Choanoflagellates from M. Carr, 2008, PNAS
Fungi have a limited fossil record, although, perhaps the earliest known eukaryote fossils were of fungi (Retallack et al., 2013). We will deal with Metazoa in later lectures. First, however consider an opisthokontan group with no fossil record but which is, nevertheless important to the understanding of metazoan evolution:

Choanoflagelates, the putative sister taxon to Metazoa, characterized by a collar of cilia surrounding a single flagellum. These free-living organisms are outwardly indistinguishable from the specialized choanocytes of sponges.

What can they tell us about the biology of creatures about to become multicellular? There are four criteria of proper multicellularity Gould, 2011:

We've seen organisms that display some, but not all of these criteria:

Proterospongia
Proterospongia: An organism in which colonies of choanoflagellates are embedded in an extracellular jelly-like substance in which live amoeboid cells that divide and differentiate into new choanoflagellates. In this case, we see: But not really adhesion. So close! Next lecture, we discuss the next big step.
Additional reading: