Key Points:
•True multicellularity involves specialized cell types, the specialization of reproductive cells, and apoptosis.
•Possible multicellular eukaryotes may extend back to 2.2 Ga
•Multicellularity arose five times among eukaryotes.
•Porifera (sponges) are the most primitive grade of metazoan.
•There are three major poriferan taxa (Hexactinellida, Demospongea, Calcarea) and one oddball (Homoscleromorpha).
•There is no strong consensus on whether poriferans are monophyletic.
•The earliest potential sponge fossils are Ediacaran but geochemical evidence form them goes back to 1.8 Ga
•Several enigmatic Phanerozoic fossil groups are likely to be poriferans.

"Well, it's not secret that the best thing about secrets is telling someone else your secret, thereby adding another secret to your secret collection of secrets, secretly.
(SpongeBob Squarepants, Season 2, Episode 35a.)

Yellow slime mold from Wikipedia
Most of the semester remaining will address the fossil record of Metazoa (animals.) Metazoans are one of five groups of multicellular eukaryotes to arise during the Neoproterozoic. Unlike simple cell colonies like Volvox or slime molds (right), each of these groups forms organized bodies in which: Critters of "slime-mold grade" (right) show the starting point of this transition, being independent cells that come together to produce fruiting bodies from which spores (haploid reproductive cells) are dispersed.

The earliest fossil evidence for colonial eukaryotes comes from the Proterozoic:

These were forerunners to the emergence of multicellularity during the Cryogenian among. For the rest of the course we concentrate on Metazoa and Viridiphytae.

Five major groups form the main branches of its cladogram: The pattern of metazoan phylogeny is controversial. Results of molecular phylogenetic analysis are sensitive to the portion of the genome sampled (see Nosenko et al., 2013) The cladogram at right is a consensus. Ongoing controversy surrounds the positions of:

(Ediacaran - Quaternary) The sponges represent the most primitive metazoan grade, lacking organs, possessing only the vaguest approximations of tissues, but possessing: 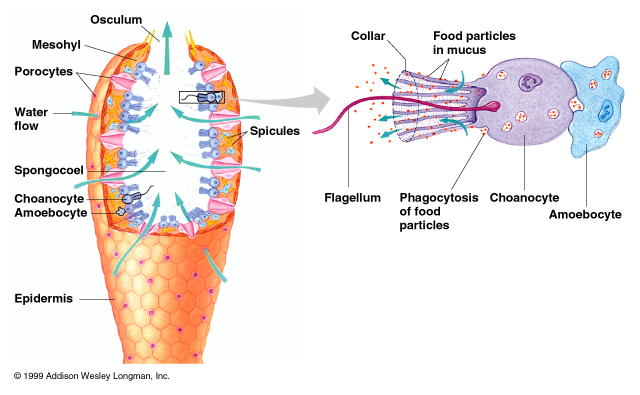 In their simplest form, sponges are hollow cylinders of living tissue, attached to the substrate at one end and open at the other. Key features:

Whether sponges lack tissues depends on one's definition. Indeed, the beginnings of distinct tissues are discernible: Sponges are capable of only the simplest organized movement, although pinacocytes can often contract in a coordinated manner, and some sponges possess specialized myocytes that can contract to close off vulnerable areas like the osculum. 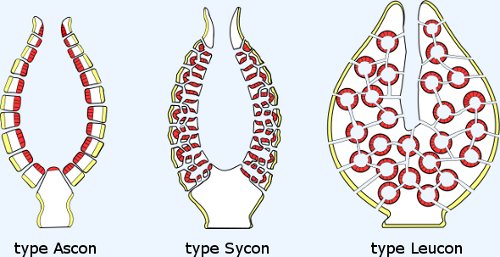 Although all sponges conform to this body plan, many increase their complexity by repeating it in a fractal manner. In the schematic at right, choanocyte-endoderm is highlighted in red: Diversity: Too great to explore here, but likely to include some oddballs such as: An unsettled question. It's generally thought that the answer is "no," but that answer takes more than one form. Complicating factors include:

The techniques of molecular phylogeny have yielded ambiguous results. For example:

find Porifera to be distinctly paraphyletic, with Homoscleromorpha, Calcarea, and Demospongea to be sequentially remote from Eumetazoa.

This issue is far from settled. Stay tuned!

Whatever their phylogeny, sponges may be the most ancient metazoans. Claims for precambrian sponge fossils include:

Before we get too excited, Antcliffe et al. 2014 reject these claims. Their conservative approach identifies the earliest sponges as hexactinellids from the earliest Cambrian of Iran.

Chaetetida: (Ordovician - Quaternary) Encrusting laminar form with skeleton of closely packed upright tubes and, rarely, spicules. Enigmatic as fossils, stimulating speculation that they were algae or tabulate corals. Long thought to have died out in Miocene. Discovery of the living representative Acanthochaetetes wellesi, with siliceous spicules, clinched the argument that they belong to Demospongea. Archaeocyathid diversity from Wikipedia
Before you conclude that all enigmas have been resolved...

Archaeocyatha: (Early - Middle Cambrian). Considered "poriferan grade" based on general body plan, but there is no consensus on their phylogeny. Reitner, 1990 found them to be nested within Porifera. If "Porifera" is paraphyletic, then GORK. At best, we assert that they branch close to, if not within Porifera.

I withheld one hypothesis of poriferan phylogeny - the minority view of Maldonaldo, 2004, who regards choanoflagellates as being derived from Demospongea through a process of paedomorphic simplification. Sounds strange, but is based in part on the observation that some choanoflagellates are capable of secreting internal structures of amorphous silica and the quite reasonable argument that in sponges, the ability to secrete silica was probably derived secondarily from the secretion of calcite.

Is it insane? Our aesthetic of evolutionary progress compels us to view choanoflagellates as precursors to poriferans, but nature isn't obliged to cooperate. Maybe Proterospongia is a drastically simplified poriferan, and choanoflagellates are choanocytes that have shaken free of their association with other cells. More data, please.