The evolution of Paleozoic vertebrates presents a paradox:

We have such a copious record of heavily armored Early Paleozoic forms that it is tempting to forget that the group's most basal members (like Haikouichthys and Myllokunmingia) essentially lacked hard tissues. Indeed, the early evolution of Vertebrata is marked by the diversification of bony tissues and their proliferation through the body. This pattern was recently illuminated by Sansom et al., 2010. (Synopsis at right.) So, we start with a review of bony evolution.

Fossil vertbrates are mostly known from hard tissues - bone and teeth. Bone is composed of:

Among living craniates, bone in an form only occurs among members of Vertebrata - craniates with vertebral elements protecting their spinal cords. NOTE: although we tend to get sloppy, strictly speaking, Hyperotreti (hagfish) are considered the sister taxon of Vertebrata but not members of it. What does the study of fossil organisms tell us about the distribution of bony tissue?

The earliest vertebrate hard tissues are small acellular elements: conodont elements, which show outer layers of enamel covering layers of dentin. Conodonts were not the only representation of craniate hard tissues in the Cambrian, however. Enigmatic, scale-like plates of bony armor called Anatolepis were also present. In this and similar creatures, histologically tooth-like denticles complete with enamel and dentin formed a composite superficial body armor.

Indeed, in many early vertebrates, there seems to have been little difference between teeth and scales, which took the form of little denticles with a pulp cavity, dentin, and enamel.

The most basal vertebrates, however, lacked any hard tissues (except for conodont elements.) A survey of early vertebrate evolution should focus on their acquisition:

The phylogeny of Sansom et al., 2010 was made possible by reexamination of these important early vertebrate, often previously cited as the ancestral vertebrate or close to Hyperoartia. It seems to represent the first appearance of hard tissue elements outside the mouth: W-shaped bony acellular scales - composites of dentin and enamel.

Indeed, in many early vertebrates, there seems to have been little difference between teeth and scales, which took the form of little denticles with a pulp cavity, dentin, and enamel. A survey of the diversity of fossil jawless vertebrates tracks the proliferation of different bone types in different parts of the body.

Overall, anaspids seem adapted for active swimming. Exactly how they ate is mysterious, but they lack obvious adptations to suspension feeding or to taking large prey.

Before proceeding, a note: The cells that secrete and maintain hard tissue may be locked within it, yielding cellular bone. Seen in larger bony elements. Cellular bone forms in two ways: 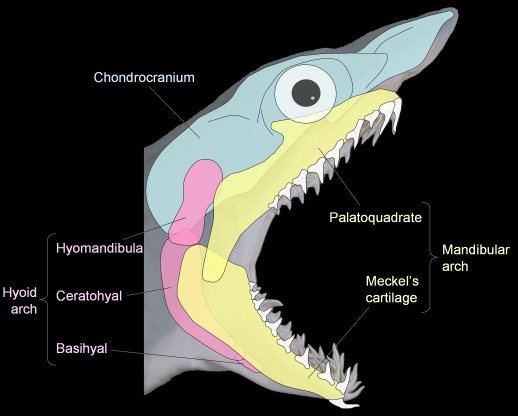 Gnathostome head schematic from British Chalk Fossils
Jaw anatomy: Up until now, when we have spoken of a "skull" we have meant only a plating of dermal bone around the head, or, in the case of Galeaspids and Osteostraci, that plus in endochondrally ossified neurocranium or braincase. With the appearance of the gnathostome jaws and branchial skeleton, the skull becomes a complex composite structure.

Note: In vertebrates with bony skeletons, these components can ossify in different patterns and into different numbers of elements, but the underlying identity of the cartilage precursors remains the same.

The following illustrations show its components using the fossil bony fish Eusthenopteron as an example.

Note, whereas the branchial arches are separated from the hyoid arch and from one another by gill slits, the space between the hyoid and mandibular arches is either closed or perforated by the spiracle. (This is particularly conspicuous in rays, who breath in through it.)

Janvier, Phillipe. 1993. Early Vertebrates
Fossil record: Fragmentary records of placoderms appear in the Middle Silurian. this is followed by a rapid diversification. During the Devonian, placoderms were the dominant vertebrate group. Both marine and fresh water forms are recorded with a worldwide distribution except for puzzling absence in South American sediments. Placoderm diversity was greatly reduced by an extinction event in the Late Devonian. They were completely extinguished by the mass extinction event at the end of the Devonian. Thus, entire radiation took up only about 50 million years, but while it lasted, it was spectacular.

Eugnathostomata: The gnathostome crown-group. The last common ancestor of Chondrichthyes and osteichthyes and all of its descendants.

Note: Chondrichthyans do not lack other hard tissues. Various groups make teeth, fin spines, and dermal armor out of dentine and enamel. To recap:

Fossil Material: Chondrichthyans are arguably the oldest known gnathostomes, but their fossil record is poor because their bodies lack preservable hard parts that stay articulated when they die. Two notable exceptions: Osteichthyes: bony fish. (Sil - Rec) Not the first we review with bones, but it is here that we first see extensive, properly endochondral skeletons.

Guiyu (Right. Silurian! Zhu, et al, 2009) is our closest well-known approximation of the last common ancestor of Osteichthyes. Remarkably, it is actually a basal sarcopterygian but also the oldest well-known gnathostome!

This creature has features seen in both primitive sarcopterygians and actinopterygians, but retains others typical of primitive stem osteichthyans and stem gnathostomes, such as the stout pectoral spine. 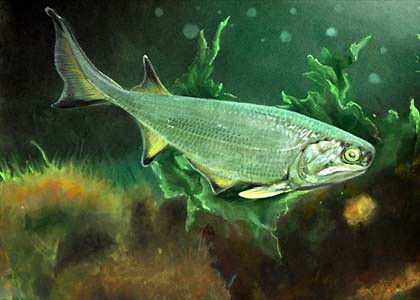 These have so vast a record from the Devonian on that it's hard to know where to start. Alas, they exceed the scope of the course. 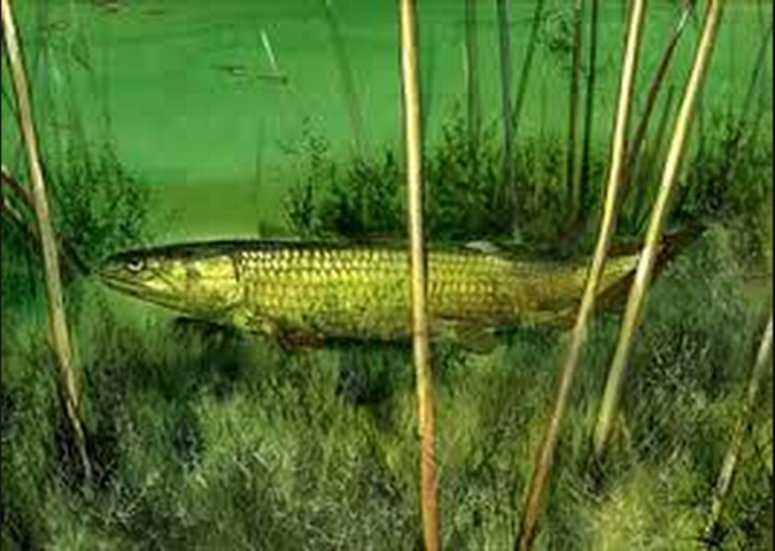 It is often suggested that they were able to move on land. Probably not. 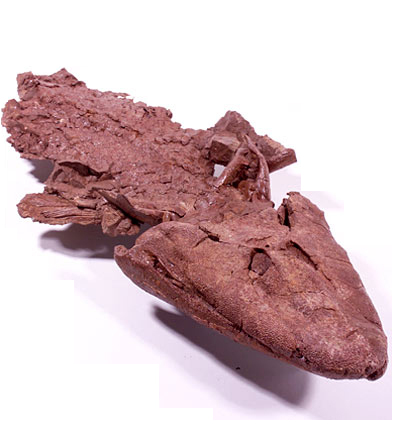 From Daeschler et al., 2006, this creature has become the new poster-child of vertebrate evolution. It is featured in:

In its general profile, it's similar to Panderichthys, there are two important differences.

These earliest stegocephalians (including Panderichthys and Tiktaalik) display an interesting trend in the evolution of the spiracle, which is:

Could it have been pushing the top of its head out of the water to breathe in through its spiracles?

Link to additional info for all of your Tiktaalik needs.