Last lecture, we saw the diversity of marine vertebrates ("fish"), ending with the transition from fully aquatic forms to taxa possessing features that could be exapted for life on land. Now we look at the invasion of the land and the diversity of Tetrapoda, the descendants of the vertebrates that accomplished this. Major living tetrapod groups include:

The tetrapod evolutionary story is interesting for reasons going far beyond their patten of diversity. Above all, at several stages of their evolution, circumstances combined to push then through profound biomechanical transformations associated with life on land. Foremost are:

The rest is details.

from University of Chicago School of Medicine

Stegocephalia: The Fingered Vertebrates (Late Devonian - Holocene).Relative to their kin, stegocephalians (tetrapods and their extinct relatives). Acanthostega (right) is representative of their basal condition. Synapomorphies:

Throughout the Devonian and earliest Carboniferous, stegocephalians diversity but remain predominantly aquatic.

All of these show ancestral characters indicting aquatic habits as adults:

Pederpes finneyae from Palaeos.
Conquest of the shoreline: In 2002, Jennifer Clack described Pederpes finneyae, from the middle of Romer's Gap at 350 mya. Although it retains a tiny sixth finger, has a robust lateral line system and heavy hyomandibula/stapes; it also has robust limbs and a skull that is compressed from side-to-side like early land vertebrates. We don't know how much time it spent on land, but it seems, at least, to have been able to walk. Recent reports of healed broken limb bones in Pederpes suggest that it spent enough time on land that injury from falls was a danger.

Tetrapoda: For our purposes, the last common ancestor of living amniotes and amphibians and all of its descendants. Synapomorphies include:

Dendrerpeton acadianum (Carboniferous) a basal amphibian from Wikipedia
Amphibia: For now, we consider Amphibia. A basal member of this group like Dendrerpeton (right) does not look terribly different form a basal reptiliomorph like Caerorhachis (below) however the "amphibian" lineage acquired certain derived features early on, including:

Most fossil "amphibians" belong to a large group called Temnospondyli that is probably paraphyletic with respect to Lissamphibia - the crown group of amphibians. This is a diverse group of tetrapods ranging from the Early Carboniferous to the Cretaceous, although their heyday was the late Paleozoic and earliest Mesozoic. They lived in or near a variety of fresh water and shallow marine aquatic habitats and exhibited a wide range of body forms, some being stout with broad heads, some flattened, and some elongate. Head shapes, likewise varied from long snouted to broad headed forms. All were aquatic predators of some stripe or another. Dendrerpeton is a basal member of this diverse group. It is less than a meter in length, but many temnospondyls achieved the size of crocodiles, and displayed varying degrees of aquatic or terrestrial specializations.

(Want to know more? For all your temnospondyl needs, check out the temnospondyl entries on Darren Naish's wonderful Tetrapod Zoology blog.)

It is only at this level in stegocephalian evolution - well within the amphibian tree - that we can firmly say that we are dealing with a group containing animals that could routinely make prolonged excursions out of water. Still, depositional settings make it clear that even adults of many temnospondyls were primarily aquatic animals.

There is general, though not unanimous agreement that Anura (frogs) and Caudata (salamanders) for a clade Batrachia within Amphibia. Their sister taxon is Gerobatrachus (Permian.) Members of Batrachia are: Like basal amphibians, basal reptiliomorphs show varying degrees of adaptation for life on land, and a range of adaptations, but none are absolutely independent of water. Some interesting highlights that are successively closer to crown-group Amniota:


Discomfort and forebodings: One living group has been neglected: Gymnophiona, the caecilians. Traditionally classified among Amphibia with frogs and salamanders, they are superficially worm-like, limbless, aquatic or burrowing, and possess heavily reinforced skulls even though, like members of Batrachia, their skull bones are fewer in number. The oldest fossil is Eocaecilia from the Early Jurassic - very much a caecilian even though it has paired limbs. Two major phylogenetic hypotheses address their position: There is no firm professional consensus. Stay tuned. 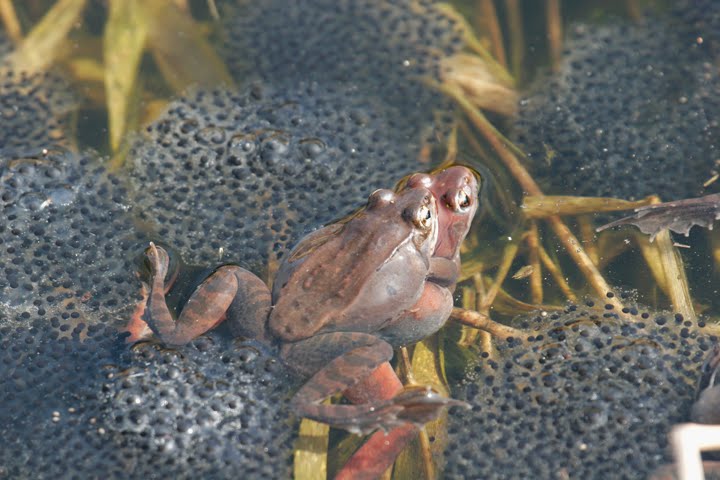 From Hybrid birder
The strange thing: Reptiliomorphs remain primarily aquatic with three exceptions: When reptiliomorphs do emerge from the water, they break not only their dependence on bodies of water for daily life, but also for reproduction.

Amniota: (Carboniferous - Recent) The most recent common ancestor of mammals and birds and all of its descendants. Amniotes represent a major departure in the evolution of full terrestriality in vertebrates, and are the first vertebrates fully to break the dependance on bodies of water. 
In a way, claiming that these are seven separate characters seems dishonest since all but the last two are associated with one important life-style change: All amniotes reproduce using an air-breathing egg or its derivative. The common ancestor of amniotes is unknown. The earliest fossil amniote, Hylomonus dates from the Late Carboniferous (312 mya). From the Carboniferous and Permian we have fossils of candidates for its sister-taxon, including: Diadectes by R. Bakker from Houston Museum of Natural Science


Stupid Amniote Tricks: By eliminating the requirement to return to moist environments to mate, amniotes gained access to dominant terrestrial ecological niches. A detailed account of their diversity and evolution is beyond the scope of this course, but there are some major themes.

Late Triassic Megalancosaurus
by Nobu Tamura from Wikipedia
Diapsida: (Carboniferous - Quaternary) Reptiles characterized by elongate limbs in which the astragalus is functionally integrated with the tibia, and the skull is specialized for a rapid bite. Encompasses minor groups (E.G. Drepanosauridae - right) and three major ones: