Key Points:
•Ecdysozoa, sister taxon to Lophotrochozoa, contains Panarthropoda plus a variety of from-shaped invertebrates including Kinorhyncha, Priapulida, and Nematoda.
•Diagnosed by regular ecdysis and a terminal mouth lined with a circle of denticles.
•Panarthropoda adds distinct paired limbs with circles of stiffened cuticle and segmented bodies with repeating units.
•Living Panrthropods include Onychophora, Tardigrada, and Arthropoda.
•Panarthropods appear in the Early Cambrian. Members include Mureropodia, "lobopodan-grade" organisms, "Dinocarid-grade" organisms, Schinderhannes, and proper Arthropoda.
•Arthropoda is diagnosed by properly "arthrodized" cuticle, where cuticle segments meet in articulated joints - an apomorphy-based definition!.
•Euarthropoda - the crown group of living arthropods, includes Arachnamorpha and Mandibulata.
•The arthropod stem includes primitive bivalve arthropods, Fuxianhuiida, and arthropods of "megacheiran-grade.".
•Arachnomorpha contains Trilobita and Chelicerata. Trilobites represent the first very speciose flowering of arthropod diversity.
•Trilobites range throughout the Paleozoic, but have their peak diversity and abundance in the Ordovician.
•We review the anatomy of trilobites and the phylogenetic and ecological signal of anatomical variation.

"To a good approximation, all species are insects."
(Robert May.)

Ecdysozoa: Organisms characterized by the regular shedding of an external cuticle and protostomous development.

A worm-like Early Cambrian stem ecdysozoan from Chengjiang, Acosmia maotiania gives us a good sense of the starting point for these animals. (Howard et al., 2020)

This lecture focuses on Panarthropoda, the only ecdysozoans with a good fossil record, Burgess Shale priapulids notwithstanding. Tardigrade from Macleans
Tardigrada (Cambrian - Quaternary). AKA "water-bears." Cute. Miniaturized lobopodans of damp and aquatic habitats. These are minute and anatomically secondarily simplified. Feed on plant cells with piercing anterior mouth-parts. Only fossils known are from middle Cambrian Orsten Lagerstätte (Maas and Waloszek, 2011.) Onychophoran from The British Museum of Natural History
Onychophora: (Carboniferous - Quaternary) "Velvet worms" are terrestrial creatures of tropical leaf litter. Their characteristics: Terrestrial onychophorans have no fossil record but for a single Late Carboniferous Mazon Creek fossil (Thompson and Jones, 1980). However, many marine fossils of the Cambrian resemble them superficially. Sally-lightfoot crab Grapsus grapsus
Arthropoda (Cambrian - Quaternary). The overwhelming majority of living ecdysozoan species. Where to start? All are characterized by a stiff cuticle that covers the body and forms distinct limb joints whose motion is limited to specific directions. Before we delve into fossil Panarthropoda, let's get a sense of what they were "evolving toward" so you can track the appearances of important features.

(Cambrian - Quaternary) Arthropods ("Euarthropoda" of some authors, used herein to refer to the crown group of Arthropoda) with a proper arthrodized (sclerotized and jointed) cuticle covering the body have a copious fossil record, as even unmineralized cuticle is a "tough tissue," facilitating copious preservation in Konzervatlagerstätten. Some groups - Especially trilobites, mineralize their cuticle in addition. During the last twenty years, their phylogenetic pattern has began to come into focus, as well.

Things to keep in mind: The Cambrian Chengjiang, Burgess Shale, and Sirius Passet provide a significant record of stem panarthropods. Alas, their literature tends to lack phylogenetic rigor and to conflate creatures that are superficially similar. One often hears group names that are definitely paraphyletic like: We follow the phylogenetic result of Liu et al., 2011. Simplified at right. Our outgroup and starting point is Priapulida, whose members lack segmentation and limbs, and whose mouth consists of radially symmetrical parts that are protracted by hydrostatic action. As we climb the tree, be aware of:

Mureropodia apae (early Cambrian) An infaunal creature believably transitional between priapulids and panarthropods, with five pairs of flexible unspecialized limbs, and a proboscis with a terminal mouth.

Aysheaia pedunculata (middle Cambrian) The classic Burgess Shale "lobopodan." Sometimes called an ancestral marine onychophoran, but actually lacking many of their synapomorphies. Aysheaia occupies a basal position in recent analyses because of its lack of robust cuticle and specialized mouthparts. It does show the specialization of the first pair of limbs for something (?) like prey capture or as a sense organ.

Stem onychophorans (Cambrian) Closer to Onychophora. Poorly understood prior to 2000. The first representatives to be studied inlclded Hallucigenia of the Cambrian Burgess Shale, a creature so poorly understood as initially to be misrepresented to the public as a stilt-walking worm. The discovery of less extreme armored forms like Microdyction (right) facilitated proper interpretation.

All appear to have specialized anterior appendages.

in a arrangement reminiscent of proper arthropod biramous appendages. Adding color to this similarity is the fact that in most taxa, these swimming appendages also seem to serve as gas-exchange organs.

Interesting examples include: They are derived in: (Aside: In your instructors' opinions, the alleged Cambrian proto-cephalopod Nectocaris pteryx, (Smith and Caron, 2010) belongs somewhere in this region of the tree.) 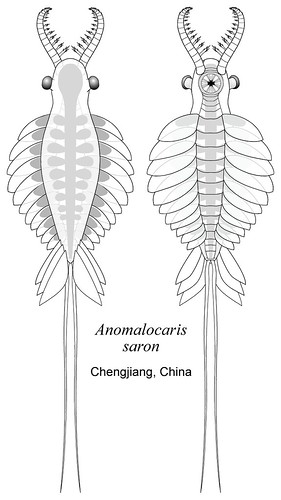 Aegirocassis by Hyrotrioskjan from Deviant Art
Ecology: Radiodonts, as apex predators, were much larger than other Cambrian animals. We have begun to notice a surprising diversity of function in their great appendages. Most are predators who used these limbs to grab prey, but others may have been scavengers (Hurdia) or, in the case of Aegirocassis, even ram suspension feeders like baleen whales. Like whales, they dwarfed other creatures in their environment.

Although eclipsed by proper arthropods by the Late Cambrian, radiodonts persisted at least until the Devonian Schinderhannes bartelsi: (Kühl et al., 2009.)

Stanleycaris hirpex from Wikipedia
The recent description of 268 specimens of the Burgess Shale radiodont Stanleycaris hirpex by Moysiuk and Caron, 2022 from 268 specimens (!!!) that preserve recognizable traces of nerve tissue has revolutionized our understanding of the homologies of panarthropod's complex array of head appendages. (We return to this later.) Also, Stanleycaris appears to possess a large median eye.


For all of your radiodont needs.

Biramous appendage from Copepods from the Bay of Villefranche
Deuteropoda: (Cambrian - Rec.) Panarthropods with biramous appendages. Ancestrally limbs seem to be biramous (right): one branch, the endopod (ventral), for locomotion, the other, the exopod, (dorsal) branch being specialized as a gas exchange structure (gill), however these branches are attached at the base, an an arrangement different from the walking-limb and swimming-flap body segments of creatures like Kerygmachela. 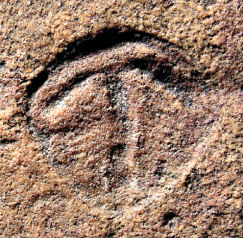 Ediacaran Parvancorina minchami from Trilobites.info
Records and rumors: Reliably identifiable fossils of panarthropods date no farther back than the Early Cambrian. Nevertheless, some researchers claim to recognize them in the zoological Rorschach-test of the Ediacaran. Putative Ediacaran panarthropods might include: Alas, the preservation of Ediacaran fossils typically precludes the identification of potential structures like jointed limbs on tiny Parvancorina, reducing our attempts to identify their affinities to paleontological pareidolia.

Molecular and morphological phylogenies of the last decade (especially the molecular analysis of Regier et al., 2010. have resolved the major patterns of the relationships of the living taxa, and major fossil ones. Among Euarthropoda, the arthropod crown group, two major groups are evident:

A major ongoing controversy concerns Pycnogonida - the "sea-spiders," recovered by some as basal chelicerates and by others as the sister taxon to the remaining euarthropods.

Things become more interesting when the fossil arthropods of the Cambrian Konzervatlagerstätten are considered. During the last three years, however, a picture has begun to emerge. A survey of "major" groups.

Nereocaris exilis from Sciency Thoughts
"Bivalve arthropods" (Cambrian). Not to be confused with bivalved members of Euarthropoda like ostrocods, this is a paraphyletic grade at the base of Arthropoda. Basal arthropods like Nereocaris exilis (right) possessed:

Recently, fuxianhuiids have become the poster children of arthropod phylogeny, with spectacular specimens revealing details of the nervous (Ma et al., 2012) and vascular systems (Ma et al., 2014). These reveal that in Fuxianhuia, these systems resemble those of living arthropods. Specifically, the brain is similar to those of most living crustaceans and insects, and its eyes and antennae are innervated similarly by the first and second sets of brain ganglia respectively.

Leanchoillia superlata from Wikipedia
"Megacheira" or "Great-appendage arthropods": A striking array of Cambrian arthropods display large raptorial anterior appendages. Examples include Leanchoillia superlata (right) and Yohoia tenuis from the Burgess Shale. Their great appendages are currently thought to be homologous to the antennae of most arthropods and the chelicerae of chelicerates, but not to the forelimbs of anomalocarids. Their position in arthropod phylogeny is debated:

Now we explore the tree of Euarthropoda - the arthropod crown-group. 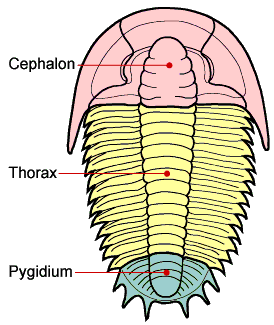 Trilobite tagmata from Wikipedia
Trilobite tagmosis: The trilobite body is divided into three regions: Note: Some trilobites of the Early Cambrian (E.G. Olenellus) retain a telson, as well.

Facial suture patterns from Wikipedia
Facial sutures: The cephala of most trilobites display facial sutures - lines of weakness at which the cuticle of the cephalon breaks apart when the animal molts. In traditional taxonomy, their geometry has great significance. They are classified based on where the suture terminates posterolaterally with respect to the corner of the cephalon:

Trilobite ecology: The diversity of eye morphology and degrees of visual acuity in trilobites prefigures their great range of ecological specializations. While most were benthic deposit feeders, some developed the ability to capture larger prey while others got up into the the water column. To scratch the surface:

Some forms, particularly of the clade Olenimorpha, found in deep water black shales seem poorly equipped to feed at all. Indeed, they resemble a trilobite imitating an ediacaran mat-animal, with a great many thoracic segments and very broad pleural lobes. Some speculation maintains that they were chemosymbiotic forms analogous to the pogonophoran worms of recent deep sea hydrothermal environments.

During the Ordovician, several groups gave rise to small nektonic plankton eaters. These are characterized by reduced cuticles, and enlarged eyes and limbs.

A particularly early and distinctive group, the Cambrian agnostids were, themselves, planktonic, experimenting with the trilobite version of the bivalve morphology found today in planktonic crustaceans. Some suggest that these are not actually trilobites. Owing to their highly derived arguably paedomorphic nature and our lack of detailed knowledge of the anatomy of other trilobites at similar developmental stages, this has been difficult to assess. Right now, opinion is divided.

Trilobite development
Trilobites being arthropods, we have good growth series for many of them, This enables us to identify agnostids as paedomorphic.


Trilobite systematics: Here we have a problem. Being well known for close to two centuries and principle index taxa for the early Paleozoic, their complex, traditional Linnean taxonomy is studied by a great many professional biostratigraphers. This includes some groups that are probably paraphyletic (See the Prothero text for a full review.) Consequently, few phylogenetic investigations have been conducted of the relationships within Trilobita. (See review by Lieberman and Karin, 2010.) This is bad because trilobites have been used in the study of evolutionary patterns and processes despite our not really knowing their real evolutionary pattern.

To date, most rigorous phylogenetic analyses have aimed at:

We await a full-on cladistic analysis encompassing the full range of trilobite diversity. Indeed, we don't really know which trilobites are the basal group. Two candidates are: Resolutions of such issues will influence our view of the ancestral ecology of trilobites.