Key Points:
•Protostomia is divided into two major branches, Ecdysozoa (arthropods and kin) and Spiralia. Within the latter are numerous small-bodied non-fossilizing forms and Lophotrochozoa (brachiopods, bryozoans, annelids, mollusks, and kin.)
•Mollusca is among the most diverse clades of metazoan: second only to Arthropoda in species diversity. The presence of a calcareous shell in most taxa gives them an unparalleled fossil record among animal groups.
•A series of body and trace fossils seem to document stem-mollusks running from the Ediacaran to the Cambrian Explosion.
•Testaria (crown-Mollusca) includes two major divisions: Aculiferans (polyplacophorans and aplacophorans) and the extraordinarily diverse Conchifera ("monoplacophorans", cephalopods, scaphopods, gastropods, bivalves, and kin). Relationships among conchiferan clades remains poorly resolved.
•Cephalopoda is primarily a clade of predatory forms. The chambered shell allows for nektonic movement of various degrees.
•"Nautiloids" are a paraphyletic assemblage of basal cephalopods. Different clades evolved differing adaptations to deal with the conflict between buoyancy generated within the phragmocone and the center of gravity from the body mass.
•Ammonoidea was a very successful clade of shelled cephalopods of the Devonian through the end of their Cretaceous. At least some members moved away from a predaceous mode of life to planktonivory.
•Coleoidea contains the majority of living species. In this clade the shell was successive internalized, reduced, then lost all together. Given their soft-bodied nature, their fossil record is generally poor outside of Belemnoidea.

A phylogeny of the mollusks: 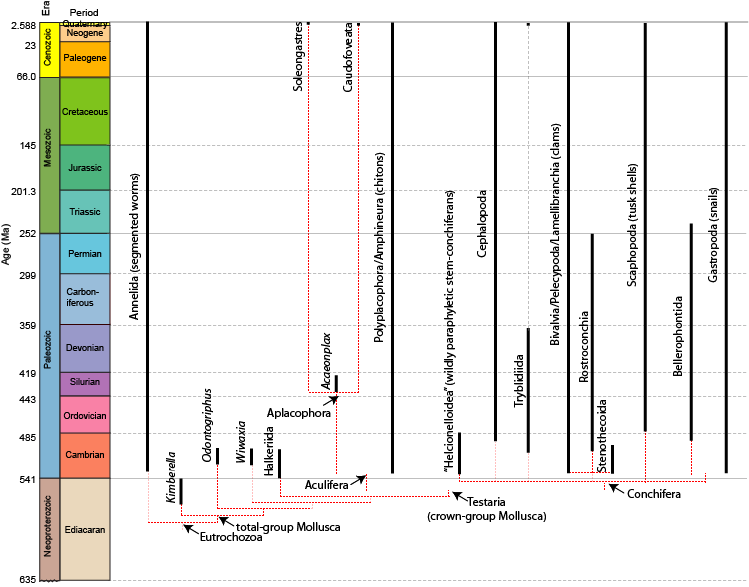 Bellerophontida is an extinct (Early Cambrian-Early Triassic) clade (or grade?) of planispiral-shelled univalved mollusks with paired muscle scars: hence, they are "monoplacophorans" in the broad paraphyletic sense. Presence of nacreous deposits on the outside surface of the shells suggests that the mantle extended out over the shell on a regular basis, as in some modern gastropods.

The superficially-snail-like appearance has meant that paleontologists have long considered these gastropod allies (or even stem-gastropods). This is certainly possible, but without soft tissue information it is difficult to state for certain.

Bellerophonts are the archetypical "dead clade walking": they survive the Permo-Triassic mass extinction, but at greatly reduced diversity. That diversity continues to decline, and by the end of the Early Triassic a few million years later they all disappear.

A phylogeny of the gastropods: 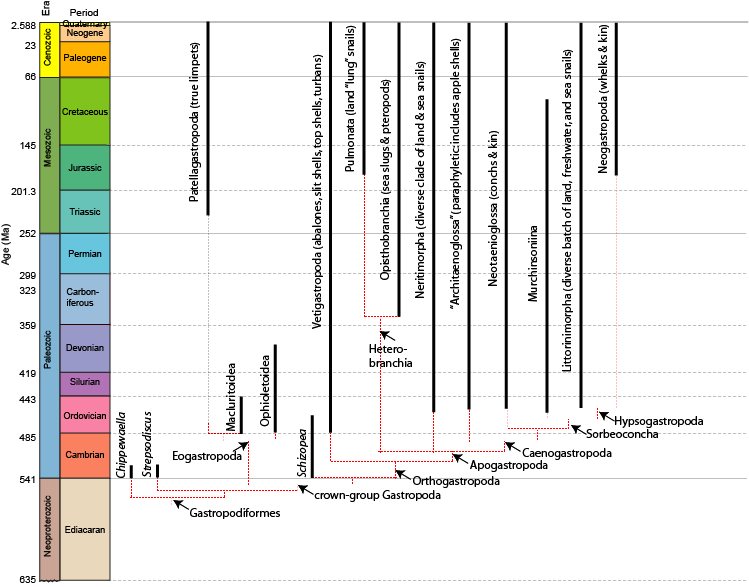 Snails (including slugs) are the most diverse group of mollusks, with 80% of living species (~75,000). Over 15,000 fossil species are known. In stark contrast to all the animals we have encountered in the class so far, this clade includes fully-terrestrial forms.

Gastropods (Cambrian to Holocene) are characterized by:

Gastropod systematics has been plagued by paraphyletic groups for many decades, as well as confusion over which Paleozoic members to include. On recent proposal is used here (see the cladogram above), but do not consider it set in stone. This system removes many classic paraphyletic groupings.

Crown gastropods include two major divisions: Eogastropoda and a clade comprised of Cambrian Strepsodiscus (the oldest known crown-gastropod) and Orthogastropoda

Some Middle Ordovician fossils may be patellogastropods, but definite members of the clade are known from the Middle Triassic onward.

Several extinct taxa have been allied to the patellogastropods as Eogastropoda. These seem to include the curious Upper Cambrian-to-Devonian Macluritoidea. These large, heavy shelled forms have one entirely flat surface: they may have actually been sedentary animals, and so unlike the majority of other gastropods. (It is noteworthy that some paleontologists place these in a wastebasket "paragastropods" outside true Gastropoda.)

The remaining gastropods are the Orthogastropoda (the "right" or "correct gastropods"). In nearly all of these the shell is coiled. Eyes of orthogastropods are on eyestalks. The radula is on a flexible membrane. Many of the organs (nephridium, osphradium, gill) are unpaired. The orthogastropods include the Vetigastropoda (abalones, turbans, top shells, slitshells), which are almost all epifaunal grazers, and the more diverse Apogastropoda. (That said, some molecular phylogenies find rather different combinations).

The apogastropods have two major divisions: Heterobranchia and Caenogastropoda.

Caenogastropods (Ordovician to Holocene) are primarily marine snails, but some are freshwater or land-dwelling forms. Basal branches have separate sexes, and include diverse taxa such as apple shells, perwinkles, cowries, moon shells, turrids, and the like. Many of these are carnivorous rather than epifaunal grazers.

One diverse clade within this is Neogastropoda (Cretaceous onward), siphonate taxa. The gill is monopectinate in these forms. Whelks, conchs, cone shells, olive shells, and murexes are all part of the neogastropod radiation. Most are predators, with some (such as cone shells) being extraordinarily venomous.

Not a statement about the ability of gastropods to maintain interest, but rather about a particular life habit. A wide variety of gastropod taxa make a living by drilling into, killing, and eating hard-shelled mollusks (bivalves and other gastropods). The radula is typically used to carve into the prey; in some neogastropods an accessory boring organ in the foot has evolved to supply a mixture of various substances to dissolve and weaken the shell. Once pierced, the snail sends its proboscis into the victim to feed. (In the case of some venomous snails, it first injects the bivalve victim with venom. The muscles relax, and the ligament opens the shell, allowing the snail to rasp away at the clam.)

(Do NOT confuse them with the equally-poorly-known Stenothecidae, a helcionellid group.) Stenothecoids are a problematic group of early-through-mid-Cambrian mollusks with a dorsal and ventral valve: essentially molluscan brachiopods. Unlike brachiopods, however, the valves are not bilaterally symmetrical, but show a slight spiral.

They appear to have been sediment sitters. When their valves were found isolated they were considered limpet-like gastropods. They have been allied with bivalves by some authors, but on no real strong basis.

A phylogeny of the bivalves: 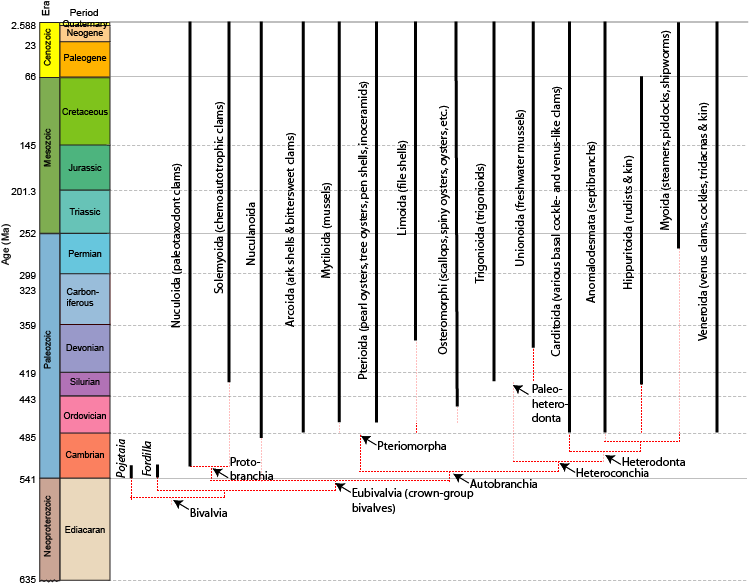 Bivalves aka Lamellibranchiata aka Acephala aka Pelecyopoda: second only to gastropods among mollusks in terms of species diversity. They range from the Cambrian onward, but with greater diversity in the post-Paleozoic. Their basic anatomy:

The phylogeny of Bivalvia is become better understood. Basal members of Bivalvia (Early Cambrian forms like Pojetaia and Fordilla) are exceedingly small (~4-5 mm long), and likely epifaunal animals similar to protobranchs. Crown bivalves--Eubivalvia consists of the Protobranchia and Autobranchia, both extant.

Cambrian to Holocene forms, with protobranch gills and taxodont dentition. These taxa are not suspension feeders:

Vastly more diverse, autobranchs are suspension-feeders (or their descendants), and have lamellibranch gills and any of a wide-variety of dentitions. They include three vast clades: Pteriomorpha, Palaeoheterodonta, and Heterodonta (the latter two united as Heteroconchia

Ranging from the Ordovician onward. These forms are almost exclusively suspension feeders, and many are epifaunal, attached to the substrate by a byssus. This group includes well known taxa such as Arcoida (ark shells and bittersweet clams); Mytiloida (mussels); Limoida (file shells); Pteroida (pen shells), and three groups of special note for paleontologists:

Silurian to Holocene, typically equivalve with hinge teeth in a single (rather than double) row. Two major groups:

Ordovician onward, containing a huge diversity of clams. Marine, eulamellibranch (other than septibranch anomalodesmatans). The nacreous layer is reduced or absent. Most are siphonate: consequently, this clade includes the deepest infaunal forms.

A major extinct clade is Hippuritoida (Late Jurassic-end of Cretaceous), the rudists. These are epifaunal sessile forms, ecologically equivalent to Tridacna. Some are recumbent; others were elevators (where one valve formed a tall cone, and the other a flat operculum). Almost certainly they fed by means of zooxanthellae. During the mid-to-Late Cretaceous they formed vast reefs, displacing scleractinian corals in the hot tropical regions of the world. Like their distant inoceramid (and even more distant belemnoid and ammonoid) cousins, they were extinguished at the K/Pg boundary.

Although some heterodonts have rudist-like habits (such as the enormous cockle Tridacna, aka the "giant clam" of the Indo-Pacific), most are infaunal suspension feeders. In Myoida the siphon can become exceedingly long, such that the clams MUST live infaunally or risk having their flesh exposed, unable to protect it.

Among the myoids evolved the Teredinidae (shipworms), in which the shell becomes reduced and used simply as a boring organ, to drill into driftwood, ships hulls, or docks. In boring bivalves, the wood acts to protect the body, so that only the ends of the siphons are exposed

Finally, some words about mollusks from Monty Python: