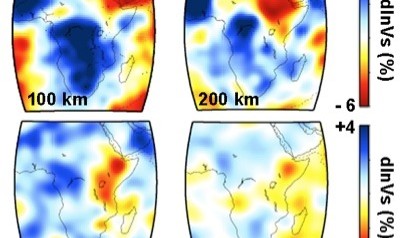 Isotropic shear wavespeed variations in the upper mantle from the SEMum model [Lekic and Romanowicz, 2008]. The model is developed using the spectral element method to perform full waveform modeling. Note the structural complexity in the uppermost 100-200 km which must be corrected for in order to ensure robust scattered wave imaging. The slow velocity anomalies beneath the East African Rift to great depths (>350 km), and the Afar plume is seen into the transition zone.

I am attempting to characterize the geometry, gradients and retention of sharp lithospheric and crustal interfaces. By combining tomographic, waveform-modeling, and scattered-wave imaging methods, I am trying to determine the depth to the LAB and its topography, including how rapidly changes in lithospheric thickness occur, as well as the strength of its associated velocity gradients.