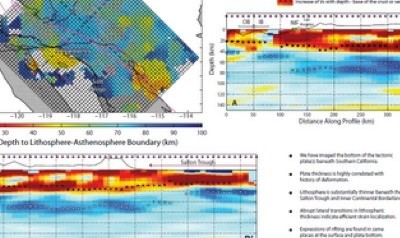 Conversions of teleseismic shear (S) waves to compressional (P) waves across velocity interfaces (such as the Moho or the lithosphere-asthenosphere boundary) allow us to map out variations in plate thickness across Southern California. Anomalously thin lithosphere is observed beneath rifted regions, such as the Salton Trough.

The stretching and break-up of lithosphere through a process called rifting controls the evolution of continents and formation of oceans. Constraints on the kinematics and dynamics of rifting are almost exclusively provided by surface geologic and geochemical observations combined with geophysical imaging of the crust. What happens to the underlying mantle lithosphere during rifting is poorly known, in large part because seismologists have yet to image lithospheric variations across an active rift system. Here, we detect mode conversions of teleseismic shear waves across the lithosphere-asthenosphere boundary (LAB) beneath Southern California, and present the first maps of lithospheric thickness that resolve variations on lengthscales relevant for constraining continental rifting. LAB depth varies from ~90 to ~40 km below the region, with thick lithosphere present beneath the Peninsular and Transverse Ranges, and thin lithosphere beneath the Salton Trough and the Continental Borderland. In the Salton Trough, lithospheric thinning is substantially greater than crustal thinning; the two can be reconciled if substantial mafic underplating / intrusion and/or rapid metamorphosis of sediment into basement rock are occurring. Our results demonstrate that lithospheric thinning occurs over very similar lengthscale as and is not systematically offset with respect to surficial and crustal expressions of rifting, consistent with a mode of deformation that is either pure-shear or simple-shear along steeply dipping shear zones. Furthermore, rapid horizontal variations in  lithospheric thinning suggest efficient strain localization within the lithosphere.

You can read more about this work in a recently published Report in Science.