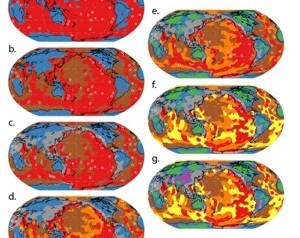 When cluster analysis is used to classify the profiles of shear velocity (Vs) into N groups whose members are similar, the geographic extents of these groups mirrors the surface expression of tectonics. When N = 2 (panel a), one cluster corresponds to oceanic regions and the other to continental ones. As N increases, ocean basins start to subdivide according to age, and tectonically-modified regions of continents are distinguished from stable shields and platforms. The fifth cluster to form (orange) is particularly interesting as it appears to be associated with hotspot volcanism.

Cluster analysis offers us a means of classifying objects into groups whose members are similar to one another, and differ from those in other groups. Many different methods have been developed to quantify differences between objects and to allocate the among clusters. This has made cluster analysis a very useful data mining and analysis technique across fields of inquiry including medicine and physical and social sciences. In global seismology, cluster analysis has been used to find waveforms that are similar to one another, and reject ones that are anomalous due to noise or sensor malfunction (see, e.g. Houser et al. 2008).

We have applied cluster analysis to global shear velocity (Vs) tomographic models of the upper mantle, and found that even simple k-means clustering (in which the Vs profile beneath a point on the surface is treated as a point in M-dimensional space, and distance between points is taken to be simple squared-Euclidean distance) can be used to identify, validate and explore salient features across tomographic models. In the figure on the left, we show the geographic extent of clusters as the number of clusters that are allowed to form increases from 2 to 8 for the SEMum model down to 350 km depth.

Thus, cluster analysis reveals that absolute shear wave velocity (Vs) depth profiles naturally group into families that correspond with known surface tectonics. This allows us to construct a global tectonic regionalization based solely on tomography, without the help of any a priori information. We find that the profiles of stable platforms and shields consistently exhibit a mid-lithospheric low velocity zone (LVZ) between 80 and 130 km depth, while the asthenosphere is found at depths greater than 250 km in both regions. This global intra-continental-lithosphere low velocity zone agrees with recent receiver function studies and regional tomographic studies. Furthermore, we identify an anomalous oceanic region characterized by slow shear wave speeds at depths below 150 km. Hotspots are found preferentially in the vicinity of this anomalous region. In the Pacific Ocean, where plate velocities are largest, these regions have elongated shapes that align with absolute plate motion, suggesting a relationship between the location of hotspots and small-scale convection in the oceanic upper mantle.

You can read more about cluster analysis of global tomography here.

You can also load in the cluster locations and associated Vs profiles by loading this LekicRomanowicz2011_SEMum_tectonic_clustering file into MATLAB (with "load" command) and using the following sample MATLAB code: